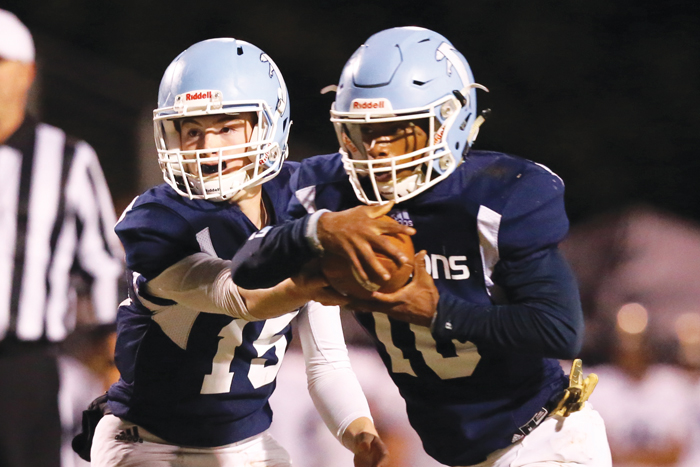 West Rowan QB Noah Loeblein (15) hands off to Jalen Houston (10) during an earlier game this season. On Friday, the Falcons' season ended with a 42-7 loss to Charlotte Catholic. ... James Sipes file photo/for the Salisbury Post

CHARLOTTE — West Rowan’s strong football season ended harshly on Friday, with a a 42-7 loss to Charlotte Catholic at Keffer Stadium.

Charlotte Catholic has won the last two 3A championships.

The fifth-seeded Cougars (10-3) rolled 66 yards to score on the game’s first possession, built their lead to 21-0 in the first quarter and brought on a running clock by taking a 42-0 advantage with seven minutes left.

The ninth-seeded Falcons (9-5) had won seven of eight coming in, including two playoff road games, but Catholic breezed into a regional final meeting with Kings Mountain.

After Jimmy Brewer’s 7-yard TD made it 14-0, the Cougars pushed the lead to 21-0 through the air, with Harrison Barnett hitting Garrett McKernan on a 44-yard play.

In the second quarter, Barnett scored on the ground for a 28-0 halftime lead.

West didn’t allow any points in the third quarter, but Catholic expanded its lead in the fourth quarter on another Barnett-to-McKernan touchdown pass and Jake Smith’s touchdown pass to Jason Jeffares.

Noah Loeblein ran for 25 yards and threw for 37.

Houston got a TD in the final seconds for the Falcons to prevent a shutout. West moved 75 yards to score. Houston got the touchdown from the 9, his 19th of the season and 54th of his career. Federico Cruz added the PAT.