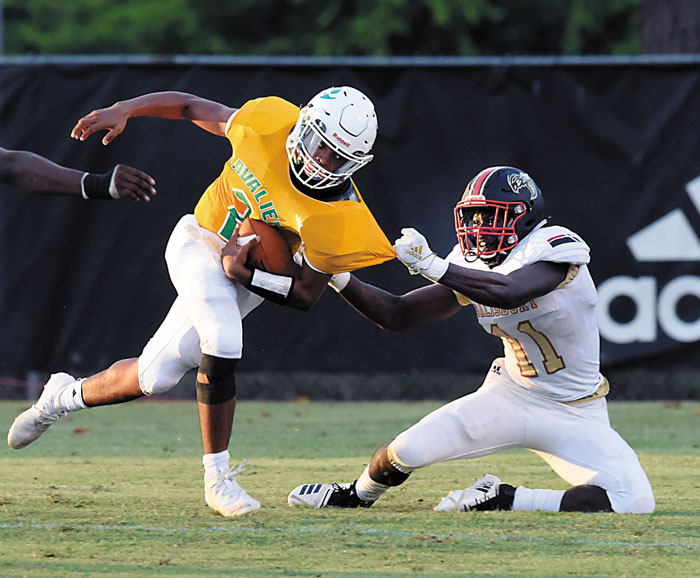 SALISBURY — Salisbury’s Jalon Walker is one of those youngsters that walks in a room and makes jaws drop.

Even if you’ve never seen him play, you’d offer this guy a scholarship based on the eye test.

Physically, it’s all there. He’s 6-foot-3, 200 pounds, all muscle and no fat, and growing fast. A textbook linebacker, if there’s ever been one.

It’s not just who he is right now as a high school sophomore, it’s who he’s going to become in a couple of years. He has a sweet disposition, but on football fields, if he’s not on your team, he’s going to be a nightmare.

That’s why UNC, Duke and Wake Forest offered scholarships before his sophomore season even started. UNC was first in line.

“I got some offers over the summer, but all that meant was that I have to keep working even harder,” Walker said. “If I keep doing what I need to do, more offers will come.”

Jalon was born to Curtis, who once made 25 tackles in a game for Catawba, and his wife, LaSheka, a former North Rowan basketball player, in those Coastal Carolina days.

For Curtis Walker, the coaching path veered from Coastal Carolina, where Walker spent 10 years as linebackers coach and defensive coordinator, to a one-year stop at Western Carolina. In December, 2012, he was hired as Catawba’s head coach. That, fortunately for the Hornets, brought him back to Salisbury.

It’s a blessing for him to be guiding the son of a coaching colleague.

“Sure, it’s cool to get to coach Curtis’ son,” Hinson said. “But what makes it special is Jalon has become such an awesome young man. In the halls, in the classroom, in the weight room, and on the field, he leads. He’s a 4.o GPA student, a role model for the young kids. He’s very mature for his age, very motivated.”

Walker has been a major part of Salisbury’s vastly improved defense this season. The Hornets have surged from allowing 21.4 points per game to allowing 8.4. They’ve also jumped from a 7-5 record to 11-2 going into tonight’s third-round 2AA playoff game at Hertford County.

“My role has basically been as an edge player — try to take away a side of the field and force people back inside,” Walker said.

Walker also makes an occasional appearance as a receiver and provides a different dynamic for the Hornets with his size. Most of the Hornets’ receivers are on the small side.

“I definitely enjoy playing on both sides of the ball,” said Walker, who has scored three touchdowns on offense and one on defense. “I don’t have a lot of catches, but if I do get a chance, I try to make an impact.”

Seventh-seeded Salisbury faced challenges last week against the second-seeded Washington Pam Pack. The first test was an unusual road trip to the coast of 232 miles.

That proved to be less of a problem than anticipated.

“It actually was a lot of fun,” Walker said. “It was a chance to talk to teammates and to bond. A lot of times at school, you don’t really get to talk much. You go to class and then you go to practice and then you go home, but on a long road trip you get to sit and talk. We made a stop at Knightdale High School (a little east of Raleigh) and we had a walk-through in Greenville at East Carolina. Then we had a good meal. Next thing you know we’re in the locker room, getting our minds right to play.”

Washington’s triple-option offense figured to create some issues, because Salisbury had faced very little of it this season. The Hornets prefer to fly and swarm to the ballcarrier, but dealing with the triple-option requires playing “assignment football.” Everyone has to be disciplined. Everyone has a job to do and has to trust their teammates to do theirs.

The heart of the triple-option is the dive. Most people haven’t been able to stop Washington’s dive, but Salisbury contained it.

“The dive was 60 to 70 percent of their offense, so we had to start there as far as defending them,” Hinson said. “Then you work out to the quarterback keeper, and then to the pitch man. Their quarterback was dangerous, so Jalon’s assignment usually was the quarterback. He put some hits on him. He made him play the game under a lot of duress.”

Washington’s first two possessions were touchdowns — for Salisbury. Linebacker Jabril Norman had a scoop and score on a fumble off a messy faked punt. Then DB Lawon Blackwell did the same thing for an early 13-0 SHS lead.

“Those two early turnovers for defensive touchdowns, that’s when we knew we had them,” Walker said. “From our reaction and from their reaction, we knew.”

Walker made six solo tackles, had two assists and knocked down a pass, but sometimes his presence is more important than his stats. He limits the opponent’s playbook. You want to run the ball somewhere or roll out the quarterback somewhere where Walker isn’t lurking.

“My assignment was usually the quarterback, but not always,” Walker said. “When we saw them come out in certain formations, it meant I was taking the pitch man. Their quarterback (Antwone Godley) was a good runner, smart with his decisions, but we kept the pressure on them. We didn’t make many mistakes.”

Washington had been rushing for 362 yards per game, but got right at 200 against the Hornets. Most of those came after Salisbury had stormed to a 32-0 lead. Washington hit one big play for most of its 86 passing yards, taking advantage of a blown coverage. But the Hornets’ defense accomplished what it set out to do.

Walker’s job will change this week, as the Hornets, who landed in the 2AA East bracket, make an even longer road trip to take on sixth-seeded Hertford County.

The Hornets are well aware their Central Carolina Conference rival North Davidson ripped through the 2AA East bracket last year and made it to the state championship game. The Hornets believe they can do the same thing.

Hertford throws the ball alarmingly well — 35 touchdown passes — so Walker may be in a pass-rush role off the edge tonight.

Whatever he’s asked to do, he’ll excel.