SALISBURY — Chris Nagy came to cheer on his daughter, who is home from college, at The Forum’s Butterball 5K run on Thanksgiving morning.

On Wednesday night, Nagy and his wife were in disagreement about who would take Annabelle to the race. He lost. Arriving to The Forum on Thursday morning, Chris thought to himself “may as well just run” instead of standing in the cold as Annabelle ran the 5K. 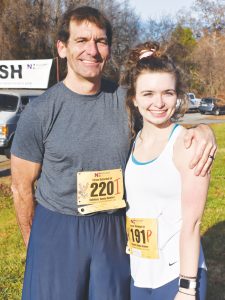 Annabelle took up running only a month ago. She went through the just over three-mile course in 28 minutes, beating her goal.

The Nagys may have started a father-daughter tradition. But the family, who has lived in Salisbury for 20 years, is moving to Asheville. Chris said there will be family here to bring them back for Thanksgiving every year and for the Butterball 5K.

Chris Moore, of Rockwell, returned to the race, again wearing his turkey-themed apron. Moore said it’s the only time of year he can wear the apron.

He brought along his mom, Tammy McCosker, who lives in New Hampshire. McCosker wore a drumstick headband to match her son.

Together, they ran the Butterball — for part of the race.

“He took off,” McCosker said. “He left me in the dust. I did pretty good. He came back and joined me in the last half mile.”

Brothers David and Philip Simons ran together. David took home the first-place medal with a time of 18:06.

The Butterball 5K is a tradition for the Simons family.

“Everyone supports each other,” David said. “It’s always a family affair.”

David signed up for the race Thanksgiving morning. He is a marathon runner, but he runs a couple of shorter races throughout the year. Now David has bragging rights over Philip, until the next race.

The Butterball 5K is in its 12th year.

“It’s become a family tradition,” said Rayna Gardener, Forum’s general manager and the race director. “They run it or walk it or whatever it takes to get across the finish line.”

The proceeds from the race go to Prevent Child Abuse Rowan. The race has brought in about $75,000 over the years for the nonprofit group, according Gardener.

“It’s such an important thing,” Gardener said. “It’s sad that we need that here, but we do, and they do an excellent job in helping these kids.”

Matt Marsh, a board member of Prevent Child Abuse Rowan and co-owner of The Forum, thanked the participants of the run and walk

“It makes a difference for the community to gather around and support these nonprofit organizations,” Marsh said.

The Thanksgiving Day race brought out 262 runners and walkers.