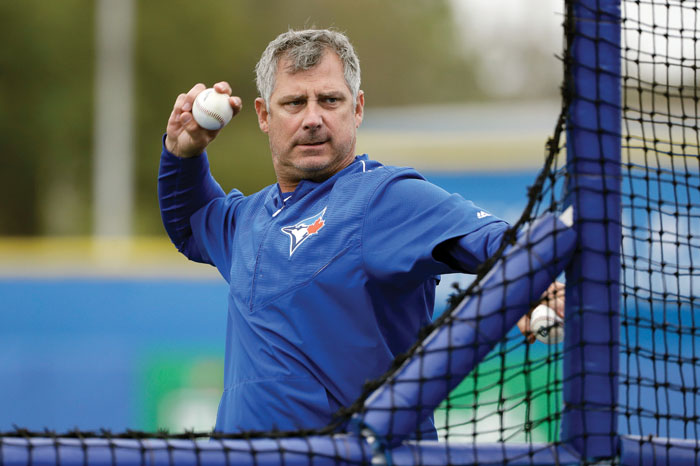 FILE- In this March 13, 2017, file photo, Toronto Blue Jays quality control coach Derek Shelton throws batting practice before a spring training baseball game against the Boston Red Sox in Dunedin, Fla. Shelton is the new manager of the Pittsburgh Pirates, the team announced Wednesday, Nov. 27, 2019. Shelton replaces Clint Hurdle, who was fired on the final day of the regular season in September following a second-half collapse that dropped the Pirates to a last-place finish in the National League Central. (AP Photo/Chris O'Meara, File)

By WILL GRAVES AP Sports Writer
PITTSBURGH (AP) — The Pirates’ leadership overhaul is complete.
Pittsburgh hired longtime major league coach Derek Shelton as manager on Wednesday, the final piece of a new-look leadership following a last-place finish in the NL Central. Shelton replaces Clint Hurdle, who was fired on the final day of the regular season.
“We are confident Derek will help lead an elite playing and coaching environment at the major league level and be a true partner to all of baseball operations as we challenge each other to get better every day,” Pittsburgh general manager Ben Cherington said in a statement.
Shelton was the third high-profile hire by the Pirates since the end of a 69-93 season marred by issues both on and off the field. Travis Williams replaced Frank Coonelly as president in October. The team brought in Cherington this month after Neal Huntington was let go after 12 years on the job.
Shelton filled the eighth and final manager vacancy, joining Joe Maddon (Los Angeles Angels), Joe Girardi (Philadelphia), David Ross (Chicago Cubs), Jayce Tingler (San Diego), Mike Matheny (Kansas City), Carlos Beltrán (New York Mets) and Gabe Kapler (San Francisco). Beltrán was the only minority hired for a manager opening.
The 49-year-old Shelton spent the last two seasons as the bench coach for the Minnesota Twins. Shelton’s previous stops include a season as the quality control coach for the Toronto Blue Jays in 2017 — his tenure overlapping Cherington’s stint as Toronto’s vice president of baseball operations — and seven years as a hitting coach with the Tampa Bay Rays. Shelton broke into the majors as hitting coach for the Cleveland Indians from 2005-09.
Shelton’s managerial experience is limited to minor league stints in the Yankees’ organization in the early 2000s.
“It is going to be an exciting change of culture in our clubhouse,” Shelton said in a statement. “It is going to be a fun environment in which we will all be held accountable to each other. It will be a player-centric culture built on strong communication and relationships with our players, our staff and the entire organization.”
Shelton inherits a team that finished below .500 in three of the last four seasons, though the on-field product during a miserable 25-48 second half proved to be just part of Pittsburgh’s issues. Relievers Keone Kela and Kyle Crick were suspended for their roles in separate dust-ups with members of the team’s coaching and support staff. All-Star closer Felipe Vázquez was arrested in September on felony charges stemming from an alleged illegal sexual relationship with a minor.
Cherington said shortly after his hire the Pirates need to do a better job of continuing to develop players once they reach the major leagues. Owner Bob Nutting expressed frustration at seeing prospects the Pirates let go flourish elsewhere, including Tampa Bay Rays outfielder Austin Meadows and pitcher Tyler Glasnow.
Amid the losing, there were bright spots. First baseman Josh Bell became an All-Star while hitting 37 home runs. Rookie outfielder Bryan Reynolds hit .314 while finishing fourth in NL Rookie of the Year balloting and shortstop Kevin Newman hit .308 in 130 games after being elevated to the starting role following an early season injury to Erik Gonzalez.
The pitching staff, however, is in tatters. Ace Jameson Taillon is out for 2020 after Tommy John surgery on his right (pitching) elbow for a second time. Pittsburgh finished with a team ERA of 5.18, next-to-last in the NL and 26th in the majors.
___
More AP MLB: https://apnews.com/MLB and https://twitter.com/AP_Sports