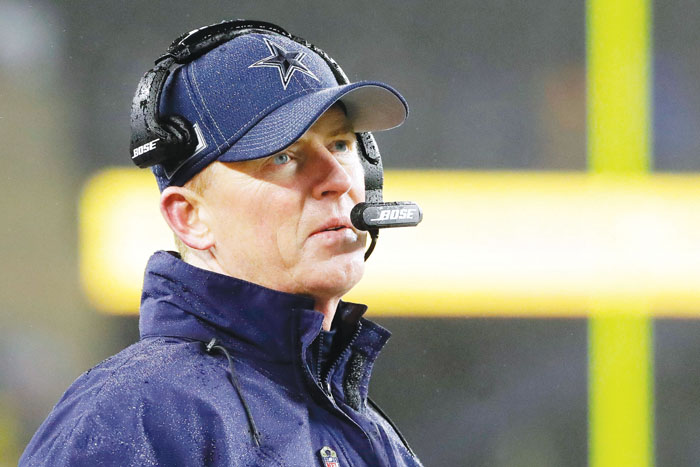 Dallas Cowboys head coach Jason Garrett watches from the sideline in the second half of an NFL football game against the New England Patriots, Sunday, Nov. 24, 2019, in Foxborough, Mass. (AP Photo/Steven Senne)

ARLINGTON, Texas (AP) — While the Dallas Cowboys prepare for another national TV game amid questions about coach Jason Garrett’s future, the Buffalo Bills just want to keep rolling toward the playoffs on a bigger stage than usual.

Never mind that Dallas is technically in a better postseason position for now than Buffalo, which is playing on Thanksgiving for the first time in 25 years. The Cowboys (6-5) still haven’t beaten a winning team, and the Bills go into Thursday with a much better frame of mind.

“I’d say it’s an opportunity for us to take a step, another step this season as a football team,” Bills coach Sean McDermott said. “So, it’s important … getting rest and prioritizing what and how we want to do things this week and also being grateful for Thanksgiving and all that we’ve been blessed with as well.”

The short week is a blessing for the Cowboys after owner Jerry Jones ripped the coaching staff following a 13-9 loss at windy and rainy New England.

The fallout has turned Dallas’ annual Thanksgiving game into a replay of a prime-time home game against Philadelphia in October. The Cowboys blew out the Eagles to regain sole possession of the NFC East lead as questions swirled about whether a loss might get Garrett fired going into the open week.

The Cowboys don’t get extra time after playing the Bills (8-3) because another Thursday game at Chicago is next. But that doesn’t mean there aren’t plenty of people wondering if Jones’ frustration over falling short of expectations could force the dismissal of Garrett early in the final year of his contract.

“You defend yourself by winning,” cornerback Jourdan Lewis said. “That’s how we defend ourselves. We’ve got to go out there and prove (Garrett) right. He believes in us. We still believe in him.”

Dallas still leads the division by a game over Philadelphia, which means it is in line for a home playoff game. Unless they overcome a two-game deficit to the Patriots in the AFC East over the final five games, the Bills will have to play a wild-card game on the road.

Buffalo, though, has won two straight and is 5-3 since a 3-0 start. The Cowboys also won their first three games following a preseason of Super Bowl chatter, but are 3-5 since.

“I don’t think any of our guys are looking ahead at the games following this game,” Bills defensive coordinator Leslie Frazier said. “It’s really about this Thanksgiving Day game. It’s so, so important to us and that’s where our focus is. This game has huge, huge implications for our team.”

Bills quarterback Josh Allen gets the Thanksgiving stage to show his development coming off a seven-game stretch with 12 touchdown passes and two interceptions after starting the season with three TDs and six picks in four games. Forget the football for a moment, though.

“The coolest part is obviously, I remember growing up, waking up on Thursday, going and eating and watching these games all day, and that’s all I did. Stuffing my face with mashed potatoes,” said Allen, who’s expecting about 40 family members and friends at the retractable-roof home of the Cowboys. “So, I know there’s people out there that are going to be doing the same thing.”

The miserable conditions in New England slowed Dallas quarterback Dak Prescott, who had a season-low 212 yards passing after averaging 420 yards the previous two weeks. But that was actually a boost for running back Ezekiel Elliott, who ran for 86 yards and probably should have been used more after being held under 50 yards rushing in consecutive games for the first time in his career.

“I do think we did a great job running the ball,” said Elliott, a two-time rushing champion seventh in the race this season. “On one drive we ran the same play seven times in a row and it really did show the identity of this team.”

Elliott was referring to the first seven plays of a drive that ended with a field goal when Prescott threw incomplete on third-and-3 on the only passing play.

Buffalo receiver Cole Beasley visits after attending high school near Dallas and playing at SMU before spending his first seven NFL seasons with the Cowboys. With five games remaining, he has exactly as many yards (525) and touchdowns (four) that he finished with in his final year with Dallas. He’s been a good complement to leading receiver John Brown, who has 856 yards and five scores.

“I know a lot of guys are glad Cole’s here,” offensive coordinator Brian Daboll said of the former high school quarterback. “He’s instinctive. He kind of sees the game through the quarterback’s eyes as a receiver, and that’s not an easy thing to teach.”

The Patriots held Amari Cooper without a catch for the first time since the No. 1 receiver joined Dallas last year. New England shut him down by putting 2018 All-Pro Stephon Gilmore on him. The Bills could try the same thing with Tre’Davious White, who is coming of a season-high-tying four pass breakups and his fourth interception in a 20-3 win over Denver.