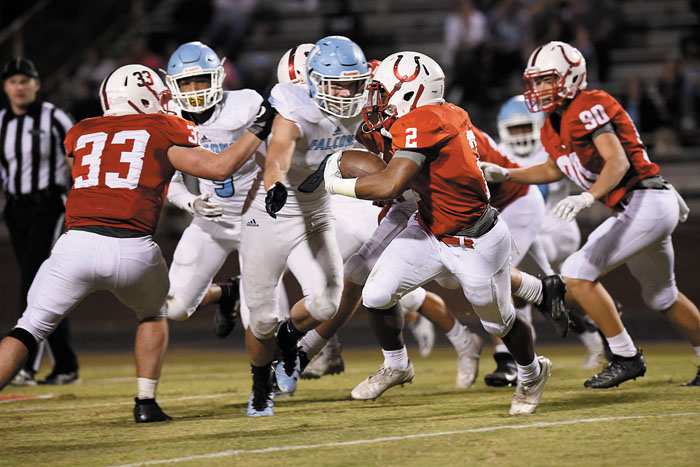 “You know, anytime that you’re practicing on Thanksgiving, it’s been a great year,” he said.

Now Nixon and his Falcons hope to extend the season into December. But it won’t be easy.

Friday night’s round three game has West (9-4), No. 9 seed in the 3A West bracket, visiting perennial power Charlotte Catholic. The Cougars are seeded No. 5 and after last week’s 34-20 win over Gastonia Huss, sport a 9-3 record — the three losses against very impressive teams.

Coach Mike Brodowicz’ team has won seven straight games since a 45-0 loss to 13-0 Weddington on Oct. 4. Very early in the season, Catholic was 1-2, after losses to nationally-ranked schools from Maryland (7-0) and Louisiana (7-3). But the Cougars’ wing T offense has been rolling of late.

“Catholic is an extremely good football team, well-coached and disciplined in what they do,” said Nixon. “They stay patient on offense and defensively, their guys don’t get into bad positions.

“It’s a big challenge for our guys,” continued Nixon. “You don’t go into Keffer Stadium and walk away with an easy win. We know what we’re up against, but we’re looking forward to the challenge, and excited for the opportunity.”

On the flip side, the Falcons will also be a challenge for Catholic. West was 2-3 after five games, but since, are 7-1. The only loss came on Nov. 8, to Statesville, 27-24 in overtime — a game that decided the North Piedmont Conference championship.

Nixon said the season changed on Sept. 13. Sitting at 1-2 and playing 4A Davie County, West lost starting running back Michael Gonsalves to an injury during the game, and speedy receiver Jalen Houston was moved to the backfield. The Falcons won that contest, 24-21.

Houston since has piled up the yardage, including 278 on 35 carries against Crest last week, in the 35-30 win. Houston is second in the county with 1,725 yards and 21 touchdowns.

Behind an experienced and talented offensive line, Houston, back Cayleb Brawley and quarterback Noah Loeblein have found running lanes. Brawley is also nearing 1,000 yards for the season.

“We moved Houston to running back in the fourth quarter of the Davie game, when Mike got hurt,” remembers Nixon. “We had planned to give Jalen some carries, because we had been struggling to get him enough touches, but he wouldn’t have been carrying the load like he is now. I hate that the change came because of an injury to Mike, though.”

Nixon, a former offensive lineman himself, was quick to point out the play of the guys up front. As much as anything, that group deserves a lot of the credit for the success of Houston and Brawley, as well as the sophomore Loeblein’s growing confidence at QB.

“Having four seniors up front, and when you figure in the two tight ends, you’re getting six seniors out of seven guys,” said Nixon. “They have consistently gotten better each game. We’re not trying to re-invent the wheel every week, we’re going to run power and counter and try to get better at it each game.”

The early growing pains for the West offense included losses to Cox Mill (28-13) and A.L. Brown (34-20), in which the Falcons had eight turnovers — three of which went for direct scores. But again, the Statesville loss is the only blemish since.

“The biggest thing early was trying to find an identity on offense and settle in,” added Nixon. “We knew our defense was good, so just don’t put them in bad situations with turnovers. Once we started taking care of the ball, things started going in our favor more.”

Loeblein confirmed that after a shaky start, he is growing into the role. He’s running more and usually hits some big passes each game.

“My confidence and passing have grown a lot since the start of the season,” said Loeblein. “My command of the offense is better and, really, we’ve all just grown up. I really think we grew up after the loss to Statesville. Although we lost, it helped us refocus on our techniques. That led to us really putting things together in these two playoff games. I feel we’re really a well-bonded and close team now.”

Loeblein’s coach is pleased with the young quarterback’s progression.

“Noah has come a long way,” said Nixon. “He’s doing a good job and taking care of the football. He’s a great kid and takes coaching very well. And he’s a competitor and that’s what we need. I think the game is definitely slowing down for him.”

Loeblein was still just 15 years old when he was thrown into the fire on a Saturday in Mooresville — the Aug. 24 opener which was postponed by a storm on Friday night.

“I didn’t play well at all at Mooresville, but it was one of the craziest atmospheres that I’ve been a part of,” said Loeblein. “There were so many people there. It was the first game against a good 4A team and then the delay to Saturday, I think that actually made the crowd even bigger.

“But I like the way the offense is going right now and the way Jalen is running the ball,” he continued. “That sets up a lot of stuff through the air because teams have to stack the box to stop him.”

“We’ve got veteran guys, and we challenge the defense to keep us in games,” said Nixon. “We’ve got some great players who are playing really hard. They’ve been in big games before. The seniors, most of them have been playing for us since they were sophomores and we’re leaning on their experience right now.”

One of those seniors, the “sideline to sideline” Suddarth, has taken Nixon’s coaching to heart.

“Coach Nixon says, ‘you don’t have to be a great player to give a great amount of effort,'” said Suddarth. “So I play with effort all of the time and I hope my guys feed off of that.”

It worked last Friday at Crest, with West leading at halftime, 21-14. Suddarth said he huddled up the defense during the break. “I told my guys, ‘we’re up and we’re going back out there and keep doing what we’re doing and play as hard as we know how to play,'” he said.

While the defense has given up 62 points in the two playoff wins, it has kept West in the game and the offense has scored 77. Nixon said that he can live with that math.

“Our last four weeks have been a tough stretch,” said Nixon. “We had to prepare for 11-0 Statesville, then Freedom, which was averaging 42 points per game, then the No. 1 seed in Crest. We know that we’re not going to go into these games and shut people out.

“These teams are really good and really well-coached,” he continued. “I’m not a fan of the shootouts. I’d rather keep it low-scoring and pound the football away, but as long as we’ve got one more point than the other team, I’m good. I don’t care if it’s 2-0 or 51-50, as long as we come out on top.”

So the Falcons are running smoothly at the right time and it’s on to Charlotte Catholic.

“You like to think that throughout the year, you get better every week,” continued Nixon. “At least that’s the game plan. You want to be playing your best football at the end of the year.”

NOTE: Loeblein laughed when asked about his 1-yard QB sneak for a touchdown in the second half last Friday at Crest. “I knew I got into the end zone,” he said. “When I landed, I saw the line and knew I was over it. Somebody had grabbed my head in the pile and my helmet was turned sideways, but I could see through the ear hole that I was over the line.” Suddarth, who was lined up at fullback on the play, helped his QB up from the pile. “Baiden said, ‘dude, your helmet is turned the wrong way.'”