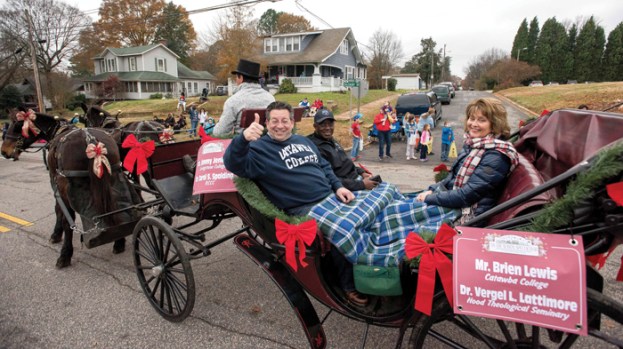 Grand marshals Brien Lewis, Jimmy R. Jenkins and Carol Spalding ride in a horse-drawn carriage during the 'Tis the Season Holiday Spectacular. The holiday tradition kicked off in Spencer on Wednesday afternoon before heading off to Salisbury. Jon C. Lakey/Salisbury Post 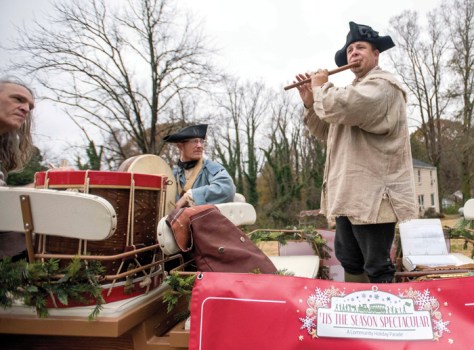 Hawkeye, Mark and Maytt Waisner offer up 18th-century folk music in the back of a horse-drawn carriage. Jon C. Lakey/Salisbury Post 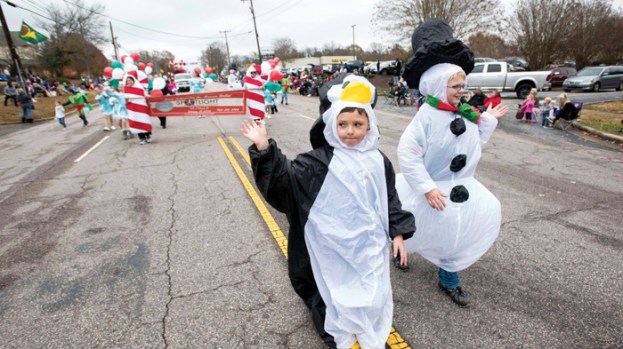 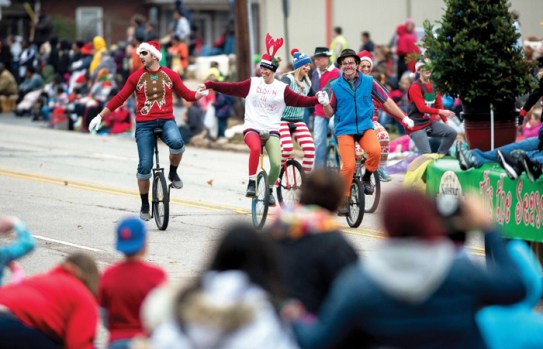 Members of the Arey family makes an appearance in the parade with their unicycles. Jon C. Lakey/Salisbury Post

Wednesday’s parade was its second year under new management and the 60th year of a holiday parade in both Salisbury and Spencer. The Holiday Caravan, the former parade, ended in 2018 amid controversy when representatives of a gay support group were told they could not ride on a float.

“I’m really honored to be asked to be one of the marshals and really pleased that they invited all of the local college presidents to be in the parade in this way,” said Lewis, president of Catawba College. “We are all such good friends. There’s good partnerships there. It’s good for the community to see how strong those relationships are and how that benefits the community as well.”

“If we’re walking or riding, it’s just fun to be in the parade,” Lewis said.

He said the parade is special because this will be his last holiday in Salisbury as president of the college. He announced earlier this year that he would leave Catawba at the end of the school year.

“We have just loved Salisbury and Rowan County. It’s been my favorite place that we’ve lived. We’ve really enjoyed what this community has been able to offer us as a family, and I’m sure we still be well connected to the many friends that we have here,” Lewis said.

The parade is among several holiday activities at Catawba College that Lewis, the faculty and community have participated in, including Monday night’s annual Christmas tree lighting.

“It was a lot of fun. Santa comes, and we have the Catawba version of ‘The 12 Days of Christmas,'” he said.

The tree lighting featured the college band’s drum line, which portrayed the “12 drummers drumming,” while members of the basketball team are the “10 lords a leaping.”

Lewis also read the Catawba College version of one of the oldest and most popular Christmas poems, “‘Twas the Night Before Christmas.”

He encouraged the community to attend the upcoming Lessons & Carols concert to be held at 7 p.m. Dec. 2 and Dec. 5, which is hosted by Catawba’s music department. The concertn is open to the public and does not require tickets. It will be held at Omwake-Dearborn Chapel with a musical prelude at 6:30 p.m.

The service weaves carols of the season with scriptures or lessons relating to the story of Christmas from the prophecies to the mystery of the Holy Trinity.

“The choir does a beautiful job. This is what really sets the stage for the holiday season for us. It’s free and open to the public,” Lewis said.

He said what the college tries to impart to the faculty and staff is a message of gratitude at this time of year.

“I’m grateful for what they do for the college and the community, and I hope and trust they are grateful for the experiences they are having at Catawba,” he said.

The parade began in downtown Spencer and concluded through downtown Salisbury.