Citizenship and friendship: This Thanksgiving has new meaning for Luz ‘Paty’ Bodine 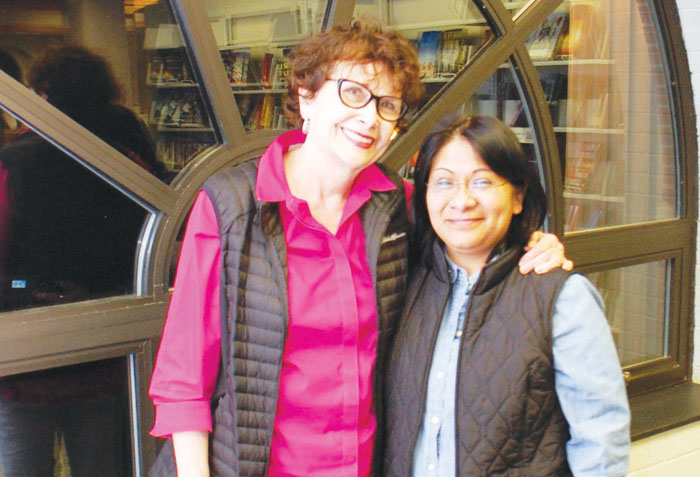 SALISBURY — The day before Luz Patricia “Paty” Bodine was supposed to take the oath making her a U.S. citizen, she felt awful.

She had a stomachache and nausea. She went to bed at 5 p.m., hoping she would have time to get over her illness and feel better in the morning. She didn’t.

But nothing was going to stop Paty from gathering up her husband, son and daughter and going to Charlotte for the swearing-in ceremony, which took place a week ago. She was one of 90 people from 38 countries who became new citizens that afternoon.

It was a bit emotional for Paty, marking the end, in part, of a two-year process during which she and Liesa Montag-Siegel probably forged a friendship to last the rest of their lives.

Montag-Siegel, a volunteer with the Rowan County Literacy Council, worked with Paty in preparing her for the citizenship test, which Paty had to pass before any oath could be taken.

The test itself has reading, writing and civics sections. A native of Mexico who came to the United States 12 years ago, Paty would have to read aloud one of three sentences correctly to demonstrate an ability to read English.

On the writing test, the 51-year-old would have to write out one of three sentences — again to demonstrate an ability to write English.

Then came the hardest, most random part and what she and Montag-Siegel had concentrated their studies on over many sessions together.

The naturalization test, which she took in Charlotte on Oct. 31, contains a possible 100 civics questions Paty could be asked. She actually would field as many as 10 of those 100 questions, but she had no way of knowing which 10 would be chosen for her.

To pass the civics component, Paty had to be right on six of the 10.

Montag-Siegel says you could go out and find any hundred people in Salisbury, and they probably could not answer the questions facing Paty.

Those queries could be things such as, “Why are there 50 stars on the U.S. flag?” “Where is the Statue of Liberty?” “What is an amendment?” “Who was the general during World War II who later became U.S. president?”

Montag-Siegel remembers another one asked, who was the president during World War I?

Paty overhears her and answers, “Wilson?”

“Yes!” Montag-Siegel exclaims, before adding. “We worked on that.”

At her citizenship test Oct. 31, Paty answered the first six questions correctly, meaning she had nailed it and would not have to be asked anymore.

What was the first question? Paty pauses for a moment, before it comes to her: Name a war the United States was involved in during the 1800s.

Paty correctly responded with the Mexican-American War. Montag-Siegel notes it was the easiest one for her to remember, given Paty’s roots, out of six possible answers.

The women laugh when they think back to the questions Paty had the toughest times with during their study sessions.

Paty couldn’t keep Abraham Lincoln and Benjamin Franklin separated in her mind. She wanted to say Franklin “freed the slaves” and Lincoln was responsible for the country’s first free library, but she knows now, thanks to Montag-Siegel’s drills and help, those answers should be reversed.

Paty first met her husband, Bryan Bodine, when Bryan accompanied her brother to Mexico one Christmas 18 years ago. The men were working at the Sunshine Manufacturing plant in Rockwell.

At the time, Paty was a nurse in Mexico City, and to say the least, it was a a big transition for her to move from the bustling, urban environment of one of the world’s largest cities to small-town Rockwell.

Not to mention, she spoke little English. Bryan’s family immediately embraced her, she says, and she gives a lot of credit to Bryan’s mother for helping her learn English through practice and some classes in Salisbury and at Rowan-Cabarrus Community College.

The work she and Montag-Siegel did through the Literacy Council concentrated solely on getting Paty ready for the citizenship test.

The application to become a citizen costs $725. Paty sent in her application July 3, and after some general requirements, such as fingerprinting, were taken care of in Charlotte at the U.S. Citizenship and Immigration Services office, she was given the Oct. 31 date to report for the interview and test.

“In the past few years, we have made it more of a focus,” says Laurel Harry, program coordinator for the Rowan County Literacy Council. “We have realized that there is a need in the community for citizenship preparation assistance.”

“Working with a tutor beforehand helps applicants feel prepared and confident when they sit for their citizenship interview,” Harry says. “It’s a great feeling when a student calls the office after their interview to tell us they have passed.”

Montag-Siegel, who is a retired librarian and a former college English professor, says she tried to concentrate first on the civics questions that were least familiar to Paty.

“We were really a good match,” Montag-Siegel says, describing how they gave each other the flexibility over two years to respond and give priority to family duties as needed. Otherwise, they tried to meet for an hour each week.

Paty says Montag-Siegel was passionate about the lessons and helping her.

“I really appreciate that,” Paty says.

Montag-Siegel looks across the table at Paty and says, “I think you could probably do the questions in your sleep.”

The tutor had no doubts her student would ace the citizenship test.

Paty says she also received a lot of support at work and home during her process toward citizenship. “Everybody helped,” she adds.

Montag-Siegel likes this facet of tutoring offered by the Literacy Council — the help toward citizenship — because of the clear goal at the end.

“I enjoy this more than teaching,” she says, hoping the two can continue working together. “We might go back now and work on the niceties of English.

Paty’s mother, two sisters and a brother still live in Mexico. She last visited them four years ago and wishes she could see them more often.

What are some things she loves about her new country? Paty puts being able to vote and the celebration of Thanksgiving toward the top of the list.

She has a lot to be thankful for, and a friend such as Montag-Siegel is one of them.