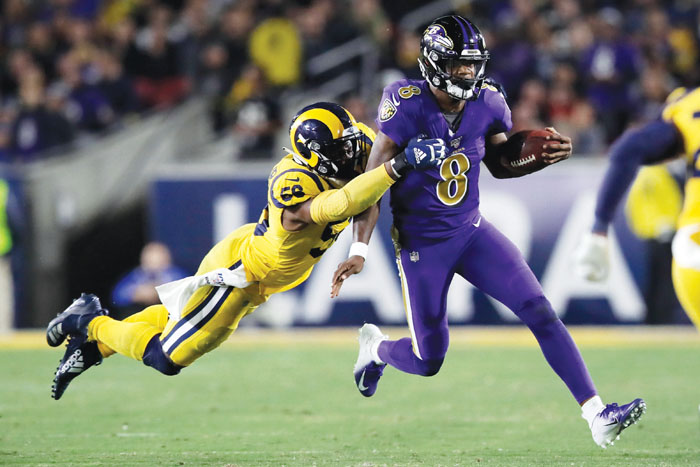 The surging Ravens, who have won seven in a row, retained the top spot in the latest AP Pro32 poll.

Baltimore routed the Los Angeles Rams 45-6 on Monday night to move to 9-2 on the season.

The Ravens earned 11 of the 12 first-place votes for 382 points in balloting Tuesday by media members who regularly cover the NFL.

“I keep waiting for Lamar Jackson and the Ravens to have a poor outing,” said Charean Williams of Pro Football Talk. “It hasn’t happened the past seven games. The Cleveland game was the last time they looked like something other than the favorite.”

The New England Patriots (10-1) received the other first-place vote for 366 points to stay in the No. 2 spot.

The San Francisco 49ers (10-1) followed close behind with 365 points and remained No. 3. The 49ers head to Baltimore to face the Ravens in the top matchup of Week 13.

“Bill Walsh didn’t start winning Super Bowls until he had a defense to match the offense,” Newsday’s Bob Glauber said. “The Niners are now in a similar situation for (coach) Kyle Shanahan, whose defense carried them to yet another convincing win, this time against the great Aaron Rodgers.”

“Led by their unflappable quarterback (Russell Wilson), the Seahawks are 6-0 on the road and still in position to chase down the 49ers atop the NFC West,” said Ira Kaufman of Fox 13 in Tampa, Florida.

The New Orleans Saints (9-2) and Minnesota Vikings (8-3) each moved up a spot to Nos. 5 and 6, respectively. The Vikings head to Seattle for a key game on Monday night.

The Green Bay Packers fell two places to No. 7 after getting routed on Sunday night in the Bay Area. The Packers, who are tied with the Vikings for first in the NFC North, have a chance to rebound in the next two weeks when they face the New York Giants and Washington. Both teams are tied for last in the NFC East at 2-9.

The Kansas City Chiefs (7-4) remained at No. 8 after their bye week. The Chiefs can take control of the AFC West this week when they host the rival Oakland Raiders.

The Buffalo Bills (8-3), off to their best start through 11 games in 23 years, have inched up to No. 9. The Bills will get a nationwide audience on a short week as they head to Dallas to take on the Cowboys on Thanksgiving. The Cowboys (6-5) dropped to No. 11 after losing to the Patriots. Despite the setback, the Cowboys still lead the NFC East.

“The New England loss marks the beginning of the end for Jason Garrett as head coach unless this team makes a deep playoff run,” said Alex Marvez of Sirius XM.

The Houston Texans moved up one place to round out the top 10. The Texans face a steep challenge Sunday night when they host Tom Brady and the Patriots.

BROWNS DT OGUNJOBI BACK FROM SUSPENSION TO FACE STEELERS

Ogunjobi was reinstated to Cleveland’s roster Tuesday after serving a one-game suspension for his involvement in the recent benches-clearing brawl with the Steelers. He was disciplined by the NFL for pushing a helmet-less Rudolph to the ground during the Nov. 14 melee between the AFC North rivals, who meet again Sunday at Heinz Field.

Ogunjobi was one of 33 players fined for the ugly scene between the teams, a skirmish triggered by Browns defensive end Myles Garrett pulling off Rudolph’s helmet and hitting him over the head with it.

His return coincides with Steelers coach Mike Tomlin announcing that rookie quarterback Devlin “Duck” Hodges will start Sunday in place of Rudolph, who was benched in Sunday’s win over Cincinnati.

Garrett was indefinitely suspended and Rudolph fined $50,000 for his actions last week. Steelers center Maurkice Pouncey is serving a two-game suspension for kicking and punching Garrett.

Garrett told league officials at his appeals hearing that Rudolph used a racial slur. Rudolph, who tried to rip off Garrett’s helmet, has denied the accusation and the league said it investigated the claim and “found no evidence.”

Garrett’s suspension covers the final six regular-season games and playoffs. He’s also going to lose $1.14 million in game checks and must meet with Commissioner Roger Goodell’s office before his reinstatement is considered.

“It’s a time,” he said of his suspension. “You know, you have ups and downs in your life and right now I’m giving back to people. I’m having time to spend with my family and my friends and so I’m just making the most out of that.”

Garrett is not permitted to be at the Browns’ facility during his suspension. At the event, he dished out meals alongside quarterback Baker Mayfield.

In a surprise move, the Browns released defensive tackle Devaroe Lawrence. He made two starts and appeared in all 11 games.

STEELERS TO START ROOKIE HODGES IN REMATCH WITH BROWNS

At least for now.

Pittsburgh Steelers coach Mike Tomlin tabbed Hodges as the starting quarterback for Sunday’s pivotal meeting with Cleveland at Heinz Field, though Tomlin cautioned against reading too much into the move.

“We’re singularly focused on winning this game, of putting ourselves in position to win this game,” Tomlin said Tuesday. “That’s where the decision lies. We’ll see where we are after this game. Really, we have no intended plans beyond this one.”

Given the chaotic nature of the position this season for the Steelers (6-5), that’s probably wise.

Hodges came on in relief of an ineffective Rudolph in the second half against Cincinnati, throwing for a momentum-shifting 79-yard touchdown pass to James Washington on his third snap that gave Pittsburgh the lead for good.

The undrafted rookie free agent who goes by the nickname “Duck” as a nod to his status as a champion duck caller back home in Alabama, was so-so otherwise — finishing 5 of 11 for 118 yards and the score — but he avoided mistakes and provided an emotional jolt that helped the Steelers stay in the thick of the AFC playoff race.

“He took care of the ball and provided a spark,” Tomlin said. “So we just thought it was reasonable as we prepare this week to allow him to continue to do that. It means nothing about our intended plans for the foreseeable future or the trajectory of Mason’s career or what have you.”

Rudolph took over in Week 2 when Ben Roethlisberger was lost for the season because of a right elbow injury and became just the eighth player since 1970 to throw at least one touchdown in his first eight career appearances but has stumbled in recent weeks. He threw four interceptions in an ugly loss to Cleveland on Nov. 14 — a game that ended with Rudolph getting into a now infamous fight with Browns defensive end Myles Garrett that ended with Garrett hitting Rudolph in the head with the quarterback’s own helmet — and tossed another pick at the goal line in Cincinnati in the first half that ended a scoring threat.

After the Steelers went three-and-out to start the third quarter against the Bengals, Tomlin had seen enough, though he doesn’t think the fallout from the brawl with the Browns — which included Rudolph refuting an allegation by Garrett that he used a racial slur — played a role in Rudolph’s shaky performance.

Tomlin added the fact the Steelers were facing Cleveland instead of another opponent played no role in Rudolph’s benching.

“We’ve got enough issues of our own that we just need to focus on us,” Tomlin said. “I say that routinely. We respect the people that we play. We acknowledge who they are for matchup and situational purposes or personality purposes. But the bottom line, particularly when you start to get in this part of the journey, (is) they’re nameless gray faces.”

Maybe, but starting Hodges over Rudolph removes a potentially combustible element from a rivalry that no longer feels dormant or one-sided.

Garrett is out for at least the rest of the season after being suspended indefinitely for slugging Rudolph. Rudolph, who was fined $50,000 but avoided further discipline, found himself the focal point of the ensuing firestorm. Cleveland fans used a Browns helmet to smash a pinata made in Rudolph’s likeness before last week’s victory over Miami and Cleveland defensive end Sheldon Richardson said he hoped Rudolph would get the nod in the rematch.

While saying the Steelers love being in “hot-button games,” Tomlin isn’t concerned about things getting out of hand as they did in the final seconds in Cleveland.

“We’re playing and playing to win,” Tomlin said. “And part of playing to win is playing hard and smart and not beating yourselves. We’re going to paint inside those white lines I promise you.”

And Hodges will get an unlikely second chance to hold the brush. Cut at the end of training camp after getting caught in a numbers game, Hodges returned to Pittsburgh after the Steelers traded third-stringer Josh Dobbs to Jacksonville in mid-September. He played capably while filling in for Rudolph — who watched from the sideline while dealing with a concussion — against the Los Angeles Chargers on Oct. 13, completing 15 of 20 passes for 132 yards with a touchdown and an interception.

Tomlin pointed out that Hodges “has not killed us” when he’s played. Given Pittsburgh’s defense, which ranks second in the league in takeaways and third in sacks, a caretaker under center may be all that’s required for the Steelers to remain in the playoff picture. It’s an aspect of the job Rudolph struggled with recently. Now it’s Hodges’ turn to see if he can continue his improbable rise from “camp arm” to NFL starting quarterback.

“At every turn he’s proven that those circumstances aren’t too big for him,” Tomlin said.