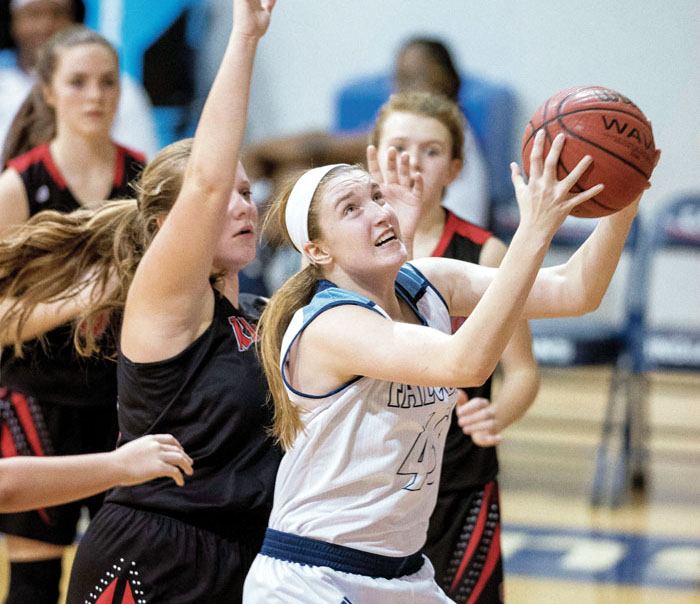 The North Piedmont Conference probably was even fiercer than the county. Anyone who doesn’t believe that should try to go win at North Iredell or Statesville.

“There’s no doubt we play in one of the top leagues in the state,” said West coach Ashley Poole, who is back for her seventh season and is closing in on 100 career victories.

That’s a nice season, but not the special season the Falcons wanted. West was (unofficially) third-best in the county (behind Carson and Salisbury). West tied for third in the NPC, splitting regular-season contests with North Iredell and Statesville and dropping two to a deeper Carson team.

West exited the 3A playoffs quickly when it got an awful draw and a first-round trip to Statesville. A year earlier, the Falcons had beaten Freedom and had reached the third round of the playoffs.

This is a program capable of major success. Just four seasons ago, Poole coached a really good 27-3 team that won championships.

The current group of Falcons doesn’t need an introduction. They’ve been around a while. They are familiar faces and names. West has six seniors, including four returning starters, plus Cindy Connolly, who was one of the first two girls off the bench.

“A lot of these girls have played together a long time,” Poole said. “They’ve been in important games together. Experience is one of our biggest assets.”

Wilson has been one of the most productive and fundamentally sound players in the county since she was a freshman. She doesn’t wow you athletically the first time you see her, but she’s amazingly consistent and efficient. The open 15-foot shot is like a layup for her, and she shot 58 percent from the field as a junior. She rebounds as well as she scores, always moving, always boxing out. She posted stellar averages — 21.6 points and 11.5 rebounds.

Wilson has signed with UNC Asheville, where she’ll make a post-to-wing conversion. Her mother, Wendy Hampton Wilson, successfully made a frontcourt-to-backcourt transition a generation ago at Florida State and is a Salisbury-Rowan Hall of Famer.

Despite her staggering stats, Wilson has always played in the shadows of girls in the talented class in front of her — South Rowan’s Janiya Downs, who was breaking every record in sight, and Salisbury’s Bryanna Troutman and Carson’s McKenzie Gadson, who were leading their teams to championships. Those three young women are in the South Atlantic Conference now, so Wilson enters this season as Rowan’s marquee player for the first time. It will be intriguing to watch how far she can lead the Falcons as a senior.

While Wilson is the ultimate high school power forward, center Whitley Arnott shines in her center role. Arnott rebounds aggressively (10.6 per game), creates foul trouble for opponents and provides defensive toughness. A softball superstar for the Falcons, she moves with surprising agility for a sturdy 6-footer. Arnott can help replace the 15 points per game the Falcons lost with the graduation of Mary Sobataka. Arnott only scored 5.5 per game last season. That’s a figure she should improve on easily if she can stay out of foul trouble.

Taylor Poole, the coach’s daughter, should be ready for her best season. She had her moments as a junior, making 44 3-pointers, scoring almost 8 points per game and producing 4.5 assists per game. She’s only 13 points away from 500 for her career.

Gabrielle “Gabby” Blabon, another senior guard, was one of the county’s most improved players. She jumped from not being much of a factor as a sophomore to averaging a helpful 6.2 points and 3.3 assists as a junior.

“Taylor and Gabby have worked hard on their games all summer,” Coach Poole said. “They’ve picked up their ball-handling and defense. They can make 3-pointers and they can pass. Our post players are standouts, but I think we are less one-dimensional than people think. We’ve got a well-rounded team.”

Handling backcourt pressure will be a key for the Falcons. If they don’t turn it over, if they can get a shot up, there’s a pretty good chance that Poole or Blabon will make a 3-pointer or that Wilson or Arnott will stick it back in.

Connolly, like Wilson and Poole, has been a key player on the varsity since she was a freshman. At 5-foot-7, she’s a swing player. She can work inside if Wilson or Arnott runs into foul trouble or needs a breather or outside if things are going smoothly. She’s quietly scored 283 points, without taking a lot of shots. She only averaged 4 points last year, but she made half her field-goal tries. She also could help replace some of those points Sobataka provided.

“People tend to forget about Cindy, but she does a lot of little things well,” Coach Poole said. “She boxes out and she can shoot.”

Reagan Haggas is the sixth senior and is a returner. She’s an athlete, a good softball player with decent size. She’ll help.

The rest of West’s 11-member team will be brand new —  juniors Megyn Spicer, Dreamah Mason and Mary Roach and freshmen Sarah Durham and D’Ajua “DeDe” Cuthbertson. Durham and Cuthberson are making the huge jump from middle school, but they come from athletic families. Poole said they don’t play like freshmen.

Spicer, up from the jayvees, has played in a few varsity games and scored in last year’s Christmas tournament. She’s an excellent athlete, the school’s best cross country runner and the starting catcher in softball. She’ll add speed to the Falcons.

Mason scored points in bunches for the jayvees.

“I think we can get good minutes from all of them,” Coach Poole said. “We’ve just got to see how everything fits together.”

If West does get those “good minutes,” if the Falcons have some depth, this is going to be a tough-to-handle team.

It appears Statesville and North Iredell are down from where they’ve been. South Iredell is expected to be better, but the NPC may still come down to the games between the Rowan schools —  scrappy defending champ Carson, much improved East and experienced West.

One thing to keep an eye on with the Falcons is going to be free throws. West shot just 52 percent from the foul line last season, and that’s not going to get it done against the best teams on their schedule. Wilson and Arnott get fouled an awful lot, so they have to take advantage of those free points. Wilson checked in at a respectable 62 percent from the line last season, but with her stroke, she should be up around 75.

West’s boys won’t be in action yet due to the football run, but West’s girls are going to open tonight at 7 at home against Davie County.