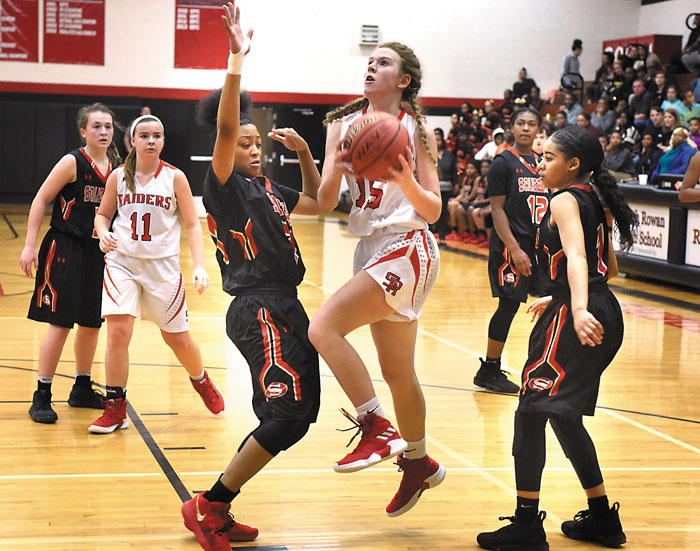 LANDIS —  There was a night last winter when Janiya Downs scored 53 points and South Rowan still lost, 61-60, to West Davidson. There also was  night she scored 52 to lead a 76-72 win against North Davidson.

Downs, now a Catawba freshman, was named All-State by the Associated Press. It’s highly unusual for someone on a 13-13 team to make All-State, but Downs wowed a statewide voting panel with overwhelming stats. She not only provided 60 percent of South’s points, she led her team in rebounds, assists, steals and blocks. She led the Raiders in just about everything except fouls and turnovers.

When you lose a monumental player like that, it automatically means a rebuilding season.

But it doesn’t mean a hopeless season. It just means the Raiders have their work cut out for them if they’re going to compete night-in, night-out in the 10-team Central Carolina Conference that is made up of Salisbury, South and eight Davidson schools.

Alex Allen, a first-year teacher who starred at Carson for coach Brooke Stouder and played college ball at Lynchburg, expected to learn the coaching ropes as an assistant this season, but when Stacy Ellis decided not to return, Allen was offered the head job. She’s accepted the challenge.

Allen was one of those versatile players who performed in every possible role in high school —  backcourt, post, scorer, rebounder, ball-handler, defender — depending on the rest of the lineup, so she understands the whole game. She’s also smart. She made all-conference academic teams while she was at Lynchburg.

“This has all been good so far,” Allen said. “Really busy, but I like coaching.”

Allen is blessed with two building blocks to lay the foundation for her first team.

Bethany Rymer was South’s second-best player as a varsity freshman last season. She averaged 9.6 points and 4.3 rebounds. She’ll have to handle the ball and score and rebound and stay out of foul trouble. In other words, she’ll have to do an awful lot. Fortunately, as one of the county’s cross country standouts, she’s tireless. She has nice size for a guard at 5-foot-8 and is athletic enough to make the leap  to being one of the county’s top players.

“We don’t have much size, don’t have many posts,” Allen said. ” Bethany is a great ball-handling guard, but she’s also one of our taller players and we’ll need a lot of rebounds from her.”

Senior Madison McGuire, another cross country standout, was a shooter last season. She was a floor-spacer, a 3-point specialist who spread defenses out and gave Downs room to operate. McGuire has a nice touch and made a team-high 40 3-pointers.

She averaged 6.4 points and 2.6 rebounds. She’ll be asked to do a lot more, will be asked to get more steals, to score more on layups and to get to the foul line more often.

“We’ll need points from Madison, but the biggest thing she brings is great leadership,” Allen said. “She’s our voice on the court. She really communicates well with her teammates.”

The rest of the returners — seniors Aleyanna Littlejohn and Akira Harrington and juniors Jessalyn Rollins, Danielle Redmon, Carlie Moore and Paige Chabala (who is out for a few weeks with an ankle injury) don’t have much statistical history.

Moore did turn in solid games early last season before she went down with an injury. She played in 10 games.

“She’s very strong defensively, and that’s going to be a good role for her,” Allen said.

Defense is also the strong suit for Littlejohn. Rollins will be expected to make some 3-pointers.

South is counting on two freshmen to make an immediate impact. So far, so good. Mackenzie Chabala has scored 22 points in the Raiders first two games, while Madilyn Cherry contributed 10 points in Monday’s win against East Davidson in a CCC opener.

That hard-fought 55-49 road victory was the first for Allen. There will be more this season, but the Raiders won’t be favored often. Rowan County looks very strong, with everyone having more quickness and experience than the Raiders. Some of them also have a lot more height. This is a small team.

“It’s a great group of girls and they’re willing to work hard,” Allen said. “I think we’re going to play with some scrappiness.”