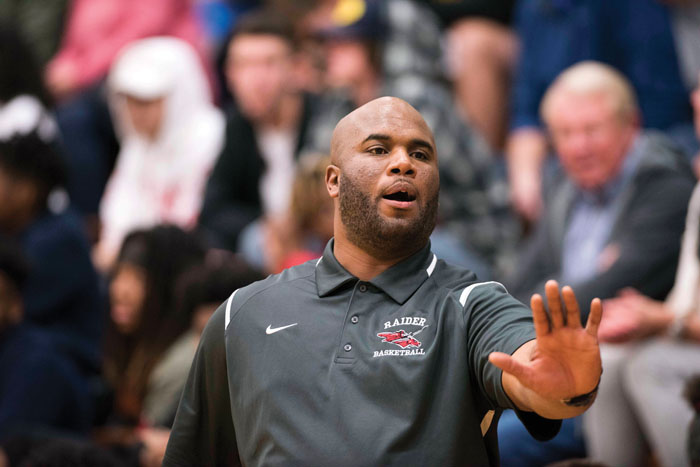 LANDIS — These are tough times for South Rowan’s boys basketball.

South is coming off a 4-21 season. The Raiders’ steadiest producers were seniors.

The four victories came in Central Carolina Conference contests. There was a stunner against Thomasville, a victory against an East Davidson team with similar talent and a sweep against Oak Grove, which was ranked as the state’s worst 2A team.

Oak Grove is better this time, so it isn’t going to get any easier to find victories. South (0-2) missed a chance to grab one early when it lost at East Davidson on Monday, 53-51.

On an average night in the 2018-19 season, South was outscored, 67-52, so it’s not like the Raiders were dropping a lot of nail-biters. They weren’t all that close. Now they have to try to narrow the gap.

Patient head coach Andre McCain, the former West Rowan standout, returns for his fifth season.  He started his coaching career with no chance in the 3A South Piedmont Conference and 47 straight losses, but he’s hung in there. Now he’s won 12. He’s hopeful the Raiders can score more points this season (that seems likely), while allowing fewer (that’s the big question mark).

Many of South’s players are familiar names and faces. Jarron Hines and Andrew Jones are gone, but the bulk of their supporting cast returns.

“We’ve got a lot of things going for us,” McCain said. “We’ve got experience, a lot of guys who have been in the program three or four years. We’re not big, but we do have pretty decent size and length.  We’ve got guys who can score. The key to improving is to get those big stops in a league where it isn’t easy to get stops. This is a tough league.”

The 6-foot Peacock isn’t going to be a big statistical guy, but he’s one of those guys coaches love. He shows up for everything and always says and does the right thing. He won’t be the best player in the county, but he won’t make mental mistakes and he’ll give as much effort as anyone.

“He’s a vocal leader,” McCain said. “He knows the system.”

Finger hurt an ankle in South’s last scrimmage, so he missed the opener and was limited in South’s second game, but he scored in double figures 14 times last season and topped 20 points three times, so he can provide consistent double-figure scoring. Finger looks like a player, 6-foot-1, lean and long. He plays taller than his height.

“He’ll be a go-to scorer,” McCain said. “He’s got long arms, he can create his own shot, and he can get to the basket.”

Junior Braden Graham, a 6-foot guard, looks like he’s ready to make a major  jump. He had a few double-figure outings for the varsity as a sophomore, and he’s started incredibly strong this season, with 31 points against East Rowan and 25 against East Davidson. He’s thin, but he can really shoot and he rebounds well.

Logan Carter, the soccer standout, has good skills and turned in a number of double-figure outings down the stretch last season. He’s got good size (6-2). He’s aggressive and doesn’t settle for jumpers. He’ll take it to the rim.

Braxton Stanley wasn’t a big factor last season, but he’s worked on his game and will be in the mix at guard. Barrett Thompson, who broke his collarbone during the football season, is just getting back to health. McCain hopes to have him 100 percent by late December. Thompson is a good ball-handler, and he’s fearless.

Austin Barnes, a football defensive lineman, provides size and physicality. McCain hopes to get some shooting from Nathan Nowak and Ryan Woodman.

The “wild card” on the roster is another football player — Mahleek Spruill.

“He’s got a knack for getting steals and deflections,” McCain said.

With Finger, Graham and Carter, South has a chance to score steadily — but the Raiders can’t give up 67 per game like they did last year. They hope to keep opponents in the 50s. If they can, they’ve got a shot.

“Accountability is the word for us this season,” McCain said. “We need to execute better and defend better, and I think we will. I like this team’s chemistry.”