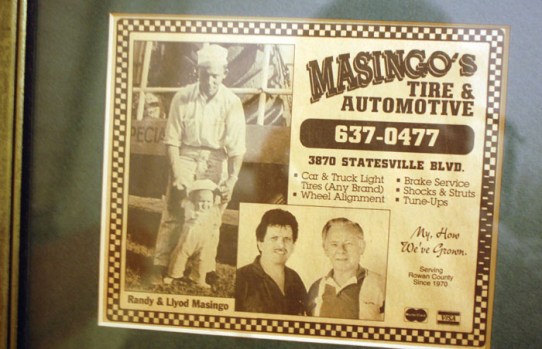 Photo by Mark Wineka/Salisbury Post Chris Masingo has framed a couple of the old newspaper advertisements from the old Masingo's Tire & Automotive shop his father, Randy. left in the inset, and grandfather Lloyd operated for many years. The picture within the ad at far left shows Randy as a baby with his dad, Lloyd. 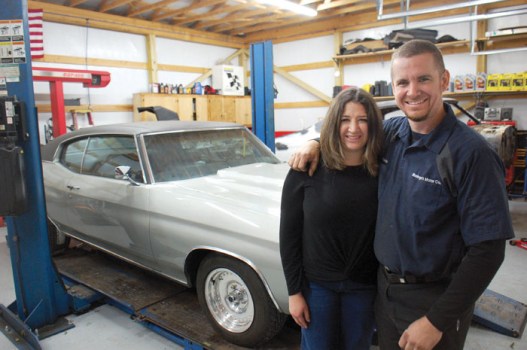 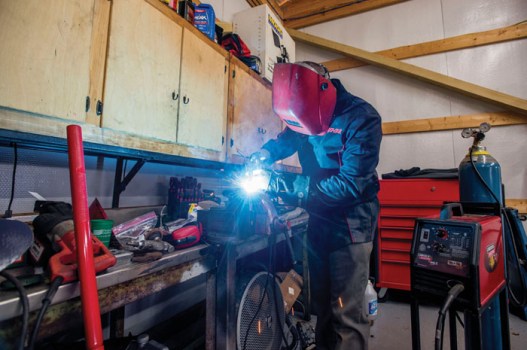 JON C. LAKEY/SALISBURY POST Chris Masingo, owner of Masingo's Motor Company, at his three bay shop at his home on Mooresville Road. Masingo is the third generation mechanic in the Salisbury area following in the footsteps of his father and grandfather. Masingo welds on a piece of steel in his shop. Salisbury,North Carolina,11/21/19. 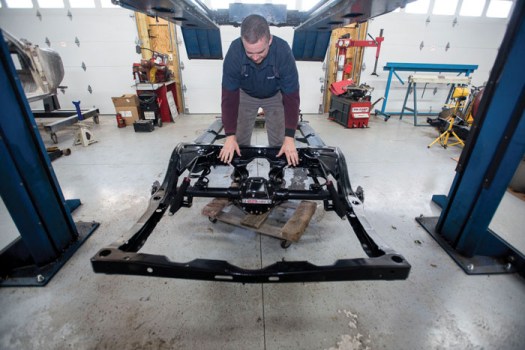 JON C. LAKEY/SALISBURY POST Chris Masingo, owner of Masingo's Motor Company, at his three bay shop at his home on Mooresville Road. Masingo is the third generation mechanic in the Salisbury area following in the footsteps of his father and grandfather. Masingo explains the setup for the rear suspension on a chassis of a 1970 Chevelle that he is restoring for a customer. Salisbury,North Carolina,11/21/19. 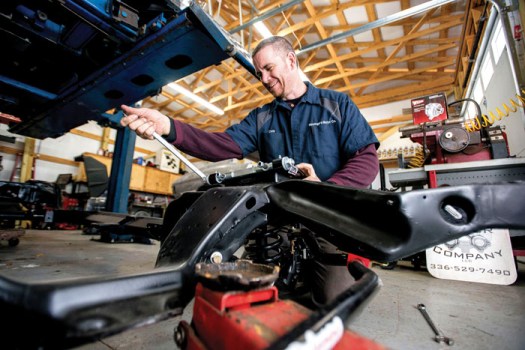 Chris Masingo, owner of Masingo's Motor Co., works in his three-bay shop at his home on Mooresville Road. Masingo is the third generation mechanic in the Salisbury area following in the footsteps of his father and grandfather. Jon C. Lakey/Salisbury Post

SALISBURY — When you say Chris Masingo is a car guy, you’re not fooling. It’s in his genes.

On his first date with Robin, who would become his wife, Chris drove up in his magnetic red 2000 C5 Corvette. She should have realized Chris was trying to impress her.

“Normally on a first date, I drove my raggedy truck,” he says. “She was a little different.”

The couple married in September 2018, setting up housekeeping in the Mooresville Road house Chris had bought in 2016. The property provided room in back for the three-bay, 1,200-square-foot building meant for Chris’ ultimate goal — his own automotive shop.

He started taking jobs on a part-time basis this past April, and has been operating his new business — Masingo’s Motor Co. — full-time since August.

“I’m excited and terrified at the same time,” Masingo says.

You could say this venture is a sentimental one, too — a quiet tribute to his late father and grandfather, who together gave Chris a college degree’s worth of knowledge about cars at their old shop off Statesville Boulevard.

Chris remembers how his dad, Randal “Randy” Masingo, taught him lessons around a car or truck.

Randy would show Chris how to do a task once.

He would supervise Chris the second time.

The third time, Chris was on his own.

His grandfather, Lloyd Masingo, seemed to know everything mechanical about a car.

“Poppy was a nuts and bolts guy,” Chris says, describing how Lloyd Masingo could tear something completely down and put it back together.

Lloyd Masingo died in 2015 at age 89. Chris called them “Pops” and “Poppy,” respectively, and even though she never met these men, Robin Masingo feels as though she has known them her whole life.

She recognizes they live on in the devotion behind Chris and his work.

“I saw his passion,” Robin says, adding Chris is about taking care of his customers, treating them fairly and wanting to serve whole families if possible.

“I warranty my work,” Chris says. “I’ll stand behind it to make it good for my customers.”

But he also gets into the heavier fare, such as restorations of vintage American cars and trucks, custom fabrication, engine overhauls and late-model engine and drivetrain swaps.

He stresses that he doesn’t paint, nor do collision repair.

On a recent day, Chris had all three bays of his garage occupied. In the middle, he was working on a customer’s nicely restored 1971 Chevelle Malibu. It had been stored away a couple of years and not driven, and Chris was bringing it back to running shape.

On another end of the shop sat the frame of a 1970 Chevelle SS that he was restoring for a customer. The frame had just been blasted that morning, and a new chassis for the Chevelle sat on the shop floor nearby, ready for the day it would be installed.

Elsewhere in the garage, Chris was working on his own project, a frame-off restoration of a 1978 Pontiac Firebird — an enterprise that will serve as a running advertisement for what he can do with cars.

It’s hard to believe now that Masingo spent four years at the University of North Carolina at Charlotte studying to be an architect.

Lloyd Masingo open his automotive shop on Statesville Boulevard in 1970. For the first 10 years, the garage also sold gas, and a young Randy Masingo joined his father in 1972 as a pump jockey.

While Lloyd served as the garage’s chief mechanic, Randy learned a lot about painting and body work from others in the business. He started out on smaller things such as motorcycle fuel tanks and fenders before tackling his first full-car restoration.

Chris recalls the beautiful job his father did on Randy’s brother’s 1967 Mustang.

Lloyd retired in 1992, and the business transitioned to Masingo’s Tire and Automotive, specializing in general service, tires, brakes and wheel alignment.

Meanwhile, Chris was hanging around the shop and attending Davie County High School, where he graduated in 1999. He interned for Salisbury architect Karen Alexander as a senior in high school before heading off to his architecture studies at UNC-Charlotte.

Chris laughs, calling it the curse of the Oldsmobile, but during the summer of 2003 he reworked a powerful new engine for a 1985 Cutlass. It turned him off architecture and helplessly into a gearhead.

Randy Masingo was disappointed at first.

“He was not happy,” Chris says, “but he was happy to have the help.”

Chris remembers the first time he pulled his Oldsmobile onto U.S. 70, revved it up and showed everyone in the shop what it could do.

“Don’t you ever do that again,” Randy yelled at his son when he got back. “And that was awesome.”

Chris worked for his dad until 2005 when he took on an $18-an-hour job with good benefits on the assembly line at Freightliner. Along with 1,200 other people, Chris was laid off in 2007 and never called back.

Chris returned to work at his dad’s shop. At night, he attended the NASCAR Technical Institute in Mooresville, graduating No. 2 in his class.

His dad’s death was the worst day in Chris’ life. Randy had collapsed in the hallway of his house, and it was Chris who called 911 for an ambulance at 10:50 a.m.

“I love you, Pops,” Chris told his dad as he was being moved for transport to the hospital. “I’ll see you in a little bit.”

But Randy Masingo had lost too much oxygen to his brain and died at 12:08 p.m.

“That was like being hit by a dump truck,” Chris says. “I felt blind-sided.”

Chris took some time to work through his father’s estate, before closing the shop in September 2012. He went to work for Griffin Brothers in Charlotte, specializing in tires and wheels.

He left two years later when he didn’t like the company’s change in its pay plan. Chris went to work for Mc ‘N’ Tires Automotive in Rockwell. He says Rob McIntyre treated him well, paying him commensurate for his production as shop foreman.

But he kept dreaming of having his own shop and keeping the family legacy going.

Encouraged by Robin and using proceeds from his inheritance, he worked four years for McIntyre until his new shop was ready to go.

Chris still has that 1985 Oldsmobile, and he still cherishes his red Corvette, which is parked in a garage next to a 1970 Chevelle his dad had proposed to restore.

Chris has Randal’s notes on exactly what he was planning to do with the Chevelle.

“I’m going to complete it the way he wanted it done, to his specifications,” Chris says.

It’s in his genes.