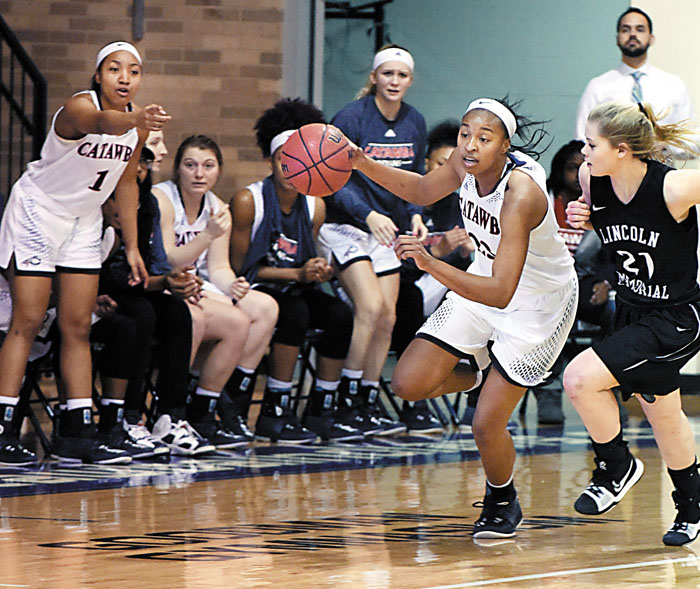 Wayne Hinshaw file photo/for the Salisbury Post ... Catawba’s Taisha DeShazo, left, shown during a game in 2018, was the Indians’ leading scorer with 22 points, Saturday afternoon in a 100-51 rout of Lees-McRae.

SALISBURY —  Catawba’s women’s basketball team was leading Lees-McRae by 42 points with 90 seconds left, but when reserve guard Jada Davie yanked down a rebound, freshman post player Sara McIntosh turned and sprinted down the floor so furiously you would have thought the Indians were down by two.

McIntosh extended her hand upward as she neared the paint. Davie rewarded her teammate’s effort with a perfect pass, and McIntosh made the catch and finish for a three-point play.

“McIntosh is that player who runs the floor as hard as she can every single time,” Catawba head coach Terrence Baxter said. “She’s tough. She’s going to mix it up with people inside. We have to hold McIntosh and Toni Tucker back in practice some because they might hurt their teammates, but we can turn them loose on game days.”

The Indians reached 100 points for the first time since Nov. 25, 2009, because of the effort of reserves such as McIntosh, Davie, Tucker, Keyotta Garris, Marissa Bruce, Anna Gardner and Kaitlin Stevenson. McIntosh made a free throw for the 100th point with 31 seconds left, as fans and her teammates on the bench went crazy.

Even the people on the end of the Indians’ bench can play. That’s how they scored 59 in the second half and 29 in the fourth quarter. Usually when a coach puts in the subs, the scoring screeches to a halt, but with Catawba it might accelerate.

“When we get a safe lead, we’re not going to press or trap anymore, but we’re still going to push the ball and play tough man-to-man half-court defense.” Baxter said. “That’s who we are, no matter who we have on the floor. We’re not going to stop playing.”

Janiya Downs. one of the Indians’ prize recruits, is still out with a quad injury, but all 16 of the healthy Indians played on Saturday. Fourteen scored. Ten scored six or more.

“We weren’t expecting 100 today,” Baxter said. “But the girls were ready to play.”

Junior Taisha DeShazo, who lit up the Bobcats for 22 points and six boards in 20 turnover-free minutes, was the only Catawba player to reach double figures. She was 4-for-6 on 3-pointers and 4-for-4 on free throws, including some technicals.

“That’s crazy that I was the only one in double figures,” DeShazo said. “But that shows how many different people we had contributing. I’ve never played on a team that scored 100 in a game, so this is a great feeling.”

DeShazo led Catawba in scoring last season and usually was the focal point of opposing defenses. She’s seeing more daylight with the return to health of post player Lauren Ford and the addition of freshmen guards Lyrik Thorne and Shaunae Sawyers, both of whom are confident ball-handlers and passers.

“Last year, we had to work so hard for every basket,” DeShazo said. “Now it’s easier. We’re deeper and we have more people who can score and handle the ball. There’s more space for me. The floor is a lot more open.”

Lees-McRae (3-5) came into the game 2-2 against South Atlantic Conference teams, but Catawba never trailed. DeShazo and Madi Hallman got Catawba started with 3-pointers, and the Indians led 26-15 after a quarter.

The Indians did not play smoothly in the second quarter, but Garris had a nice run, taking a charge, getting a steal for a bucket and getting fouled on a rebound. The Indians held a 41-29 halftime lead.

Then the Indians dominated the third quarter, 30-7, as the Bobcats wore down under relentless defensive pressure. Thorne drained back-to-back 3-pointers to push a 17-point lead to 23.

Catawba made 13 3-pointers (on 26 attempts), just one shy of the school record. The Indians missed too many free throws (10), fouled too much (31 times) and turned it over too much (22 times),  but Catawba had a 23-10 edge in offensive rebounds. Most important, Catawba forced the frantic pace it wanted and shot the ball better than the Bobcats. The Indians take many bad shots. They were 10-for-15 from the field in the fourth quarter.

Despite the pace, Lees-McRae was held way below what it had been averaging as far as points and shooting percentage.

“Now we can focus on our home game with Newberry on Tuesday,” Baxter said. “We’re 0-6 against them the last three years, but we’re deeper and tougher than we’ve been.”

That will be the SAC opener and a good test for the Indians, who are clearly better than they were last season.

NOTES: Lees-McRae is coached by Keith “Mister” Jennings, the former East Tennessee State All-American who played several years in the NBA despite being 5-foot-7. In college ball in 1991, Jennings shot 59 percent from 3-point range. He and Baxter are friends.