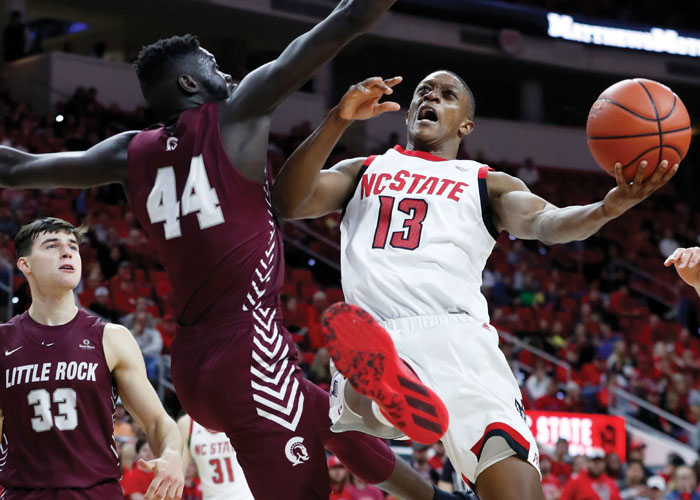 North Carolina State's C.J. Bryce (13) is fouled by Arkansas-Little Rock's Ruot Monyyong (44) as he shoots during the second half of an NCAA college basketball game at PNC Arena in Raleigh, N.C., Saturday, Nov. 23, 2019. (Ethan Hyman/The News & Observer via AP)

By NOLAN HAYES Associated Press
RALEIGH (AP) — C.J. Bryce scored 18 points to help North Carolina State beat Little Rock 74-58 on Saturday.
Markell Johnson added 12 points for the Wolfpack (5-1), who won their fifth consecutive game.
“I feel like this team is in a really good groove right now,” Bryce said. “We’re getting our guys back going and comfortable playing with each other.”
N.C. State took the lead with an early 12-2 run and pulled away late in the first half with a 12-0 spurt. The Wolfpack, who surged ahead by as many as 24 points in the first half, led 39-21 at halftime.
N.C. State finished with a season-high 11 steals and held Little Rock to 37% shooting, including 4 of 18 from 3-point range.
“Our defense was really good,” N.C. State coach Kevin Keatts said.
Ben Coupet Jr. scored 21 points to lead Little Rock (3-3). Ruot Monyyong added a career-high 20 points and 10 rebounds for the Trojans.
Monyyong and Coupet combined to shoot 17 of 27 from the floor. Their other teammates made 5 of 32 shots.
BIG PICTURE
Little Rock: The Trojans were coming off a 68-58 loss at No. 16 Memphis in which they trailed by two points late in the second half, but they couldn’t duplicate that performance. Turnovers again were a problem. Little Rock, which had 26 turnovers against Memphis, had 11 in the first half Saturday that led to 14 points for N.C. State. “It was rough for us in the first half,” Little Rock coach Darrell Walker said.
N.C. State: The Wolfpack were impressive on both ends of the floor. They moved the ball effectively on offense, scoring on 10 consecutive possessions while building their lead. They also showed attention to detail on defense, bottling up Little Rock point guard Markquis Nowell.
STAR WATCH
Nowell, who entered the game averaging 20.2 points per game, finished with a season-low eight points on 3-of-11 shooting. He went scoreless in the first half on 0-for-5 shooting.
FIVE IS ENOUGH
Walker used just five players in the second half. Nowell and Coupet played all 40 minutes of the game, and Monyyong, Jovan Stulic and reserve Isaiah Palermo joined them on the court for the second half’s entirety.
“I wanted to play the guys that I felt were going to compete, and they did,” Walker said. “We took care of the ball a lot better in the second half than we did in the first.”
PASSING FANCY
N.C. State forward Jericole Hellems entered the game with no assists in 135 minutes this season. He had a career-high six assists in 27 minutes against the Trojans.
His coach’s take?
“Don’t get used to that,” Keatts said. “He’s never going to pass. … I told the team that he had two assists, and everybody was happy. He actually had six, but that just tells you that he doesn’t pass the ball. But it was good for him.”
WILD ENDING
As N.C. State attempted to dribble out the final seconds, Devon Daniels and Nowell engaged in some heated banter that had potential to escalate. Official Tony Henderson stopped the game with 1.3 seconds remaining and declared it finished, prompting an announcement from the public address announcer that the game was over. As fans began to leave and the teams lined up to shake hands, the officials reconsidered and had the teams finish the game.
While waiting for the ball to be inbounded, Daniels and Palermo picked up technical fouls and were ejected. The teams finished the game with no further issues.
“The little guard, he was saying a few things,” Daniels said, referring to Nowell. “I’m not going to say too much about it. He was saying a few things, and I was just laughing at him. It happens, I guess.”
UP NEXT
Little Rock: After playing five of their first six games on the road, the Trojans host St. Francis Brooklyn on Tuesday night.
N.C. State: The Wolfpack leave the comforts of home for the first time this season when they play Memphis on Thursday in Brooklyn, New York.
___
For more AP college basketball coverage: https://apnews.com/Collegebasketball and http://twitter.com/AP_Top25