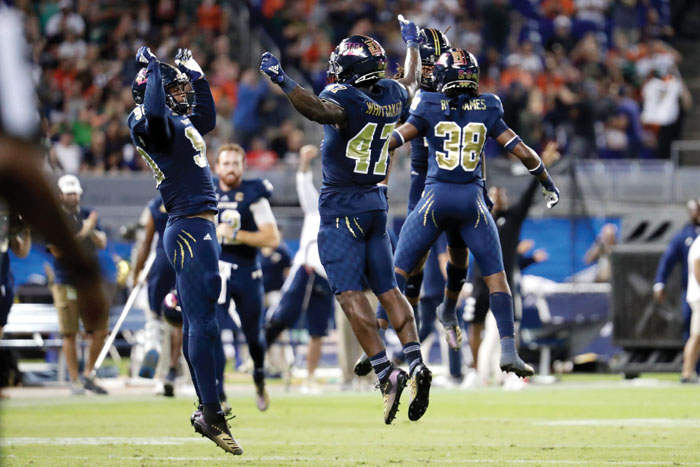 FIU defensive lineman Noah Curtis, left, and linebacker Chris Whittaker (47) celebrate after their team stopped Miami on fourth down during the first half of an NCAA college football game, Saturday, Nov. 23, 2019, in Miami. (AP Photo/Lynne Sladky)

By TIM REYNOLDS AP Sports Writer
MIAMI (AP) — The last time Miami played at the Orange Bowl was a disaster.
The Hurricanes’ return to the site might have been even worse.
Miami didn’t just lose a football game on Saturday night — it lost to crosstown rival FIU, a relatively fledgling program that has been completely overshadowed by the Hurricanes since its inception two decades ago and barely registers a blip of notice.
That is, until now.
James Morgan threw a pair of touchdown passes, and FIU — a team mostly composed of Florida kids, many of whom grew up wanting to play for the Hurricanes — pulled off easily the most significant win in its program’s history by stunning Miami 30-24 at Marlins Park, a stadium built on the soil where the five-time national champions were once the most unbeatable force in college football.
“That used to be our dream school,” said FIU kicker Jose Borregales, who connected on three field goals — two of them from 50 yards or more. “Everybody knew Miami. Beating them today, it’s like, yeah, we’re here.”
The Panthers were 20-point underdogs, were 0-3 all-time against Miami and hadn’t even led the Hurricanes in any of those previous meetings.
But just like Miami’s last game on those grounds, a 48-0 defeat to Virginia in 2007 in the team’s Orange Bowl finale, this one will be remembered as an inexcusably bad night for the Hurricanes. Quarterback Jarren Williams was intercepted three times, running back Deejay Dallas departed early in the second half with what appeared to be a grotesque elbow injury, and the Hurricanes — who once won 58 consecutive games at the site — never led.
“Utter disappointment,” Miami coach Manny Diaz said.
Miami was down 23-3 early in the fourth quarter, then got within 23-17 with 3:10 left on a 35-yard pass from Williams to Mark Pope. But FIU’s Anthony Jones — who ran for a game-high 112 yards — sealed the win with a 37-yard touchdown run with 2:17 remaining.
Williams connected with Dee Wiggins for a 3-yard scoring pass with 31 seconds left. But FIU recovered the ensuing onside kick, ran out the clock and began celebrating.
“We’ve got to do a lot better job getting our guys prepared for this kind of game,” Diaz said.
Shemar Thornton and Tony Gaiter IV caught touchdown passes for the Panthers (6-5), who are bowl eligible with the win. The Panthers started 1-3, got blown out in two of their three most recent games — by 33 points to Middle Tennessee State and by 30 to Florida Atlantic — and yet pulled this off.
“We did everything we can, when everybody says you can’t,” FIU coach Butch Davis said. “To be (three)-touchdown underdogs … if you believe that you can, then you can.”
Cam’ron Harris rushed for 83 yards and a fourth-quarter touchdown for Miami (6-5), which came into the weekend with hopes of possibly getting into the Orange Bowl. Those chances are doomed now.
The Panthers were brash — 14 penalties for 144 yards — and not intimidated. They also weren’t afraid to manipulate the rules a bit, with no fewer than five instances of players going down with what appeared to be injuries that just happened to come at times where slowing down Miami would be advantageous. The first two of those came in the second quarter with Miami going for it on fourth downs, and the Hurricanes came up empty on both including a fourth-and-goal from the 1.
Davis insisted the injuries were no ploy. This was not in doubt: Miami simply couldn’t stop hurting itself at big times, and paid the price. And criticism from the Hurricanes’ fan base has already started.
“The noise is deserved,” Diaz said. “We need to get this fixed.”
BIG PICTURE
Miami: Bye weeks were not kind to the Hurricanes this season. Miami fell to 0-3 out of bye weeks, after losses to North Carolina, Virginia Tech and now FIU. The Hurricanes were outscored 48-3 in the first quarters of those three games.
FIU: Borregales is the older brother of Miami commitment Andres Borregales — another kicker with big-time power. The FIU kicker was not recruited by the Hurricanes.
EARLY TROUBLE
This was the 10th time in the last six seasons that Miami trailed by double digits after the first quarter. The Hurricanes are 0-10 in those games. The last time they erased such a deficit after one quarter was in 2013, when they were down 17-7 to Georgia Tech after 15 minutes before prevailing.
MORGAN EFFECTIVE
Morgan didn’t have big numbers — 13 for 27, 125 yards — yet managed the game perfectly. “This entire year, I feel like we’ve believed in ourselves,” Morgan said. “Tonight, it finally came to fruition.”
UP NEXT
Miami: Closes the regular season next Saturday at Duke.
FIU: Closes the regular season next Saturday at Marshall.
___
More AP college football: https://apnews.com/Collegefootball and https://twitter.com/AP_Top25