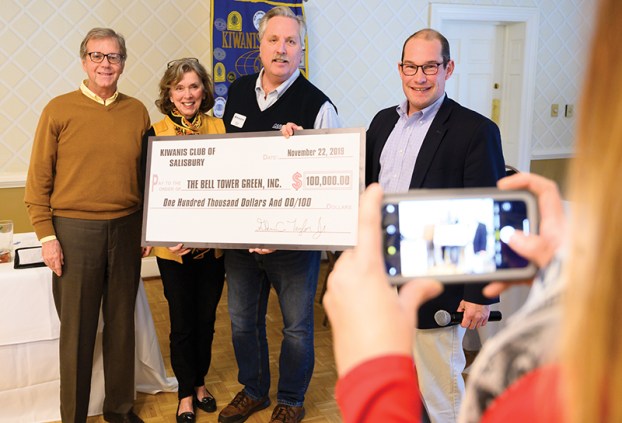 Josh Bergeron / Salisbury Post - From left, Dyke Messinger, Margaret Kluttz, Glenn Taylor and Jason Walser pose for a picture Friday after the Kiwanis Club of Salisbury presented a check to the Bell Tower Green Park project. Messinger and Kluttz are on the board of the Bell Tower Green Park. Wasler is executive director of the Blanche and Julian Robertson Foundation.

SALISBURY — Saying the Kiwanis Club of Salisbury wanted to have a big impact, President Glenn Taylor on Friday presented Bell Tower Green park representatives with a check for $100,000.

The money comes from the 2015 sale of the Kiwanis Camp property to the Yadkin Path Montessori School. Representatives of Bell Tower Green said the money will help pay to build a playground in the park.

The donation is in conjunction with the Kiwanis Club’s mission — to improve the world “one child and one community at a time,” the club said.

“Knowing that the kids are going to have a spot in this park in downtown Salisbury is just going to be phenomenal,” Taylor said. “I really want to thank our committee, Richard Eldridge and Janet Haynes, for being a part of it. But for our club to be able to donate $100,000 is fantastic. It’s a great thing to be a part of.”

Margaret Kluttz, who serves on the Bell Tower Green board, said the money will be a “big part of helping to make the playground a reality.” Kluttz said the park board still needs to raise $1.6 million to reach its goal.

The donation came in conjunction with the launch of the Kiwanis Club’s centennial celebration. The club plans to recognize 100 local people who exemplify its mission at its meetings and with a short profile and photo in the Salisbury Post. Nominees can be people who are living or dead.

Nomination forms are available online at bit.ly/SalisburyKiwanisClub. The first deadline for submissions is Dec. 15.

The Salisbury Kiwanis Club was organized with 65 members on Nov. 29, 1920. C. Irvin Jones was elected the first president. The first meeting was held at the Empire Hotel downtown. The club’s membership has included some ups and downs, with numbers declining to 39 members in 1936 and rising to a record high of 133 by 1970.

The last surviving charter member was James F. Hurley Jr., who died in 1986.

The club’s history includes establishing a “preventorium” summer camp on the grounds of what is now the Salisbury VA Medical Center after 2% of schoolchildren began suffering from glandular tuberculosis. An estimated 30 children spent the first summer there, with 25 fully recovering.

The “Health Camp” in the 1940s later moved to the current site of the Rowan County Agricultural Building, where it remained until 1960. That’s when the Kiwanis Camp property, sold in 2015, was purchased.

Before its sale, the camp’s focus changed from tuberculosis to helping with nutrition issues and speech impediments as well as serving children through the YMCA and Cooperative Extension Service.

Since 1957, the annual pancake festival has been the club’s biggest fundraiser. Money raised supports local organizations that align with the club’s mission.

For more information about the club’s centennial celebration, contact Richard Miller, chairman of the centennial committee, at rwmoptions@gmail.com or Salisbury Post Editor Josh Bergeron at josh.bergeron@salisburypost.com.

SALISBURY — There are 130 days until Census Day, and Rowan County stakeholders are working to ensure every resident is... read more