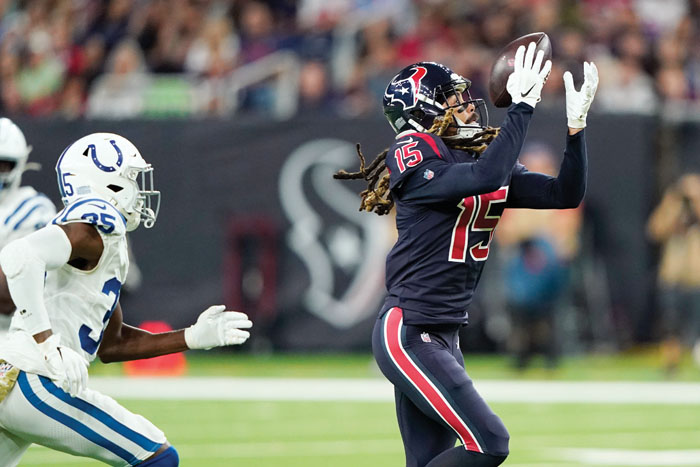 Houston Texans wide receiver Will Fuller (15) pulls in a catch in front of Indianapolis Colts cornerback Pierre Desir (35) during the first half of an NFL football game Thursday, Nov. 21, 2019, in Houston. (AP Photo/David J. Phillip)

By KRISTIE RIEKEN AP Sports Writer
HOUSTON (AP) — Deshaun Watson threw two touchdown passes to DeAndre Hopkins and finished with 298 yards to help the Houston Texans beat the Indianapolis Colts 20-17 on Thursday night to take the AFC South lead.
The Texans (7-4), who were embarrassed by Baltimore 41-7 on Sunday, trailed by four early in the fourth quarter when Hopkins got in front of Pierre Desir and stretched out to haul in a 30-yard reception to give the Texans a 20-17 lead. The Texans got things going on that drive with a 33-yard run by Carlos Hyde.
Houston’s defense stepped up after that, forcing a punt on the next drive before stopping the Colts (6-5) on fourth-and-7 with 3 minutes left. Jacoby Brissett threw for 129 yards, and came up a yard shy of a first down on Indy’s fourth-down attempt late in the fourth quarter.
Hopkins finished with had 94 yards receiving and his first TD reception came on a 35-yards grab in the second quarter. Will Fuller, who returned after sitting out three games with a hamstring injury, had seven catches for 140 yards for the Texans.
T.Y. Hilton had topped 100 receiving yards in four of his last six games against the Texans and entered averaging 133.3 receiving yards in seven career games at NRG Stadium. He wasn’t a factor, finishing with just 18 yards receiving in his return after missing three games with a calf injury.
There were about 6 minutes left in the third quarter when Jonathan Williams, who helped fill in for injured starter Marlon Mack, wriggled away from three defenders and dashed 13 yards for a touchdown to put the Colts up 17-10.
Fuller had a 51-yard reception on the first play of Houston’s next drive, but the Texans couldn’t move the ball after that and settled for a 36-yard field goal to cut the lead to four.
The Texans led 3-0 after a field goal early in the second quarter.
There were about 8 minutes left in the second when Kenny Moore tipped a pass from Watson and intercepted it. It was the first time Watson had thrown an interception at home since Oct. 14, 2018, against the Bills, a streak of 303 attempts which was the longest active run in the NFL.
The Colts cashed in on the mistake when Brissett scrambled 5 yards for a touchdown to make it 7-3.
There were 2 minutes left in the first half when Watson avoided the rush and found Hopkins wide open in the end zone for a 35-yard touchdown pass to put Houston back on top 10-7.
Indianapolis added a field goal at the end of the first half to leave it tied at 10l at halftime.
INJURIES
Houston ILB Dylan Cole injured his calf in the second half and didn’t return. … Texans DE Carlos Watkins left in the fourth quarter with a hamstring injury.
UP NEXT
Colts: Host Tennessee on Dec. 1.
Texans: Host New England on Dec. 1.
___
More AP NFL: https://apnews.com/NFL and https://twitter.com/AP_NFL