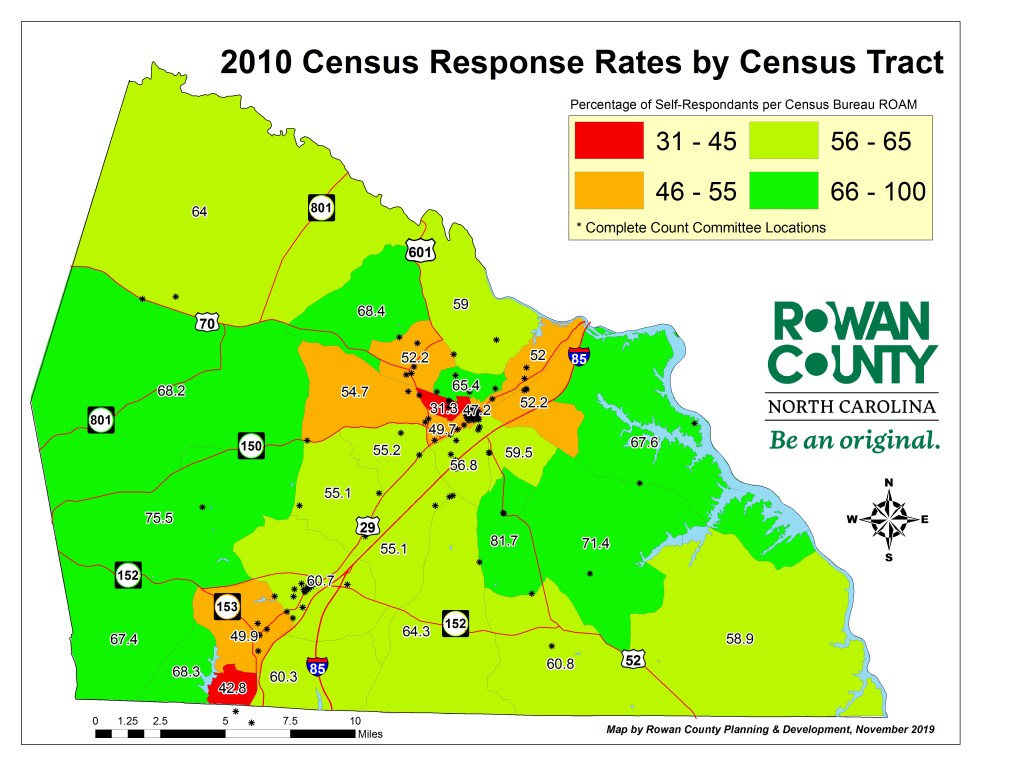 The map shows the increase of self-respondants in the 2010 Census and where the Complete Count Committee locations were to ensure everyone was counted.

SALISBURY — There are 130 days until Census Day, and Rowan County stakeholders are working to ensure every resident is counted.

County commissioners Chairman Greg Edds listed all the ways an accurate count will benefit the county at a meeting on the census Thursday. They include determining  federal, state and legislative voting districts; distribution of federal and state funds; planning investments; and designing facilities for people with disabilities, the elderly or children.

“I realized when the census was coming up, this was important, but I don’t think we really know how important it really is,” Edds said. “This is important for this community because we need to make sure to get what’s rightfully Rowan County’s, so we can grow this community and make it a better community for all.”

Peter Sabo, the North Carolina partnership specialist with the Atlantic Regional Census Center, said in the 2010 census, the state was 15,000 people short from getting another congressional seat.

Sabo reiterated the importance of having an accurate count in 2020.

“The money goes where the response is, not necessarily where the need is,” Sabo said.

County Planning and Development Director Ed Muire said the goal for the state is 82% participation for 2020. The participation rate may fall short in rural areas of the county because of a lack of internet service.

Rowan County stakeholders will form Complete Count Committees, which Sabo said contributed to the increased participation in the last census. The Census Bureau works with tribal, state and local governments and community organizations to form the committees across the country. They plan and implement locally based outreach campaigns to raise awareness of the census and drive participation.

Those committees will tap into the hard-to-count communities that usually have low participate rates.

Sabo said the biggest barrier for people not completing census forms is distrust of the government. He said once people know how the $675 billion annual federal funding is distributed and how it affects them locally through roadside education, health grants and more, there is higher participation.

The census currently is in a planning phase. An awareness campaign is planned in January and February. Next will be the motivation phase from March to May to encourage communities to participate in the census on April 1. The best response is through the internet, by telephone or on the mailed paper questionnaire.

• How many people are living or staying at your home on April 1?

• Whether the home is owned or rented.

• The gender, age and race of each person in the home.

• Whether anyone in the home is of Hispanic, Latino or Spanish origin.

• The relationship of each person in the home.

After April 1, the U.S. Census Bureau will begin following up with households that have not responded, starting at colleges and universities where students typically leave in early May. Census workers will go door to door to contact those who haven’t responded.

Sabo said the census form should be filled out based on where someone lives on April 1. College students should use the address where the college is and not their parents’ address, so that resources can be allocated for the college community.

The Census Bureau will ensure that people “get counted once, only once, and it’s in the right spot,” Sabo said.

Sabo said the Census Bureau’s reputation is based on trust. Census workers will never ask for Social Security numbers, bank or credit-card account numbers, money or donations, or anything on behalf of a political party.

Federal law protects census responses, and no law enforcement agency can access or use personal data. The data collected is used only for statistics.

The Census Bureau must deliver the count to the president on Dec. 31, 2020.