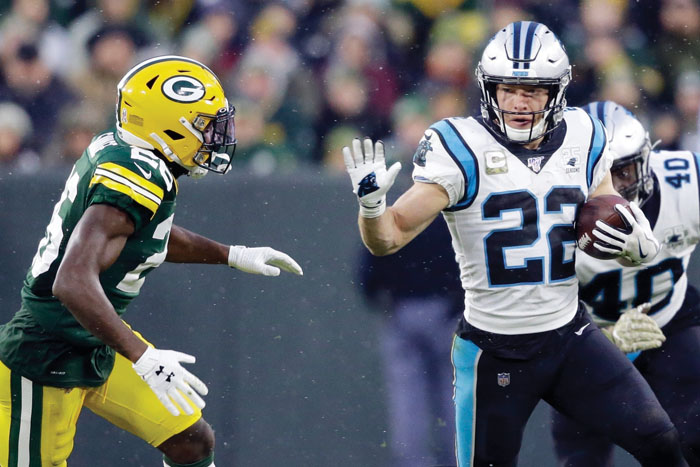 FILE - In this Nov. 10, 2019, file photo, Carolina Panthers' Christian McCaffrey (22) runs during the first half of an NFL football game against the Green Bay Packers in Green Bay, Wis. McCaffrey is on a record pace even as his team struggles, putting him in high on the list of AP MVP candidates. (AP Photo/Jeffrey Phelps, File)

By BARRY WILNER AP Pro Football Writer
During its Monday night telecast from Mexico City, ESPN showed a graphic of contenders for the AP’s NFL Most Valuable Player. Oops, folks, there were quite a few players missing from the graphic, which included only quarterbacks.
In another ESPN episode, a radio commentator mentioned that Russell Wilson will win the award because Lamar Jackson is new on the scene and can wait. So, uh, what happened last year with newcomer Patrick Mahomes?
The awards, including top coach, comeback player, best offensive and defensive players and rookies and assistant coach of the year, are voted on by a panel of 50 media members who extensively cover the NFL. No part-time observers. No players or coaches with a possible agenda.
Consider that the panel includes such Pro Football Hall of Famers as Tony Dungy, Bill Polian, Troy Aikman and James Lofton. Anyone think they don’t have a feel for the pulse of the NFL?
Previous MVPs Rich Gannon and Boomer Esiason are long-time panelists. So are some of the busiest and most renowned journalists covering the NFL: John Clayton, Chris Mortensen, Charean Williams and Rick Gosselin, for example. They see as many games and watch as much tape as coaches do.
Their charge is to select the very best for each award for that particular season. The winners are announced at NFL Honors the night before the Super Bowl.
In some years, many of the races are runaways, as with Mahomes for MVP last year. In others — this season for that award being one of them — it is a wide-open chase that takes into account only what’s happening on the field in 2019.
So yes, Baltimore’s Jackson is as much a leading contender in his first full season as a starter as Seattle’s Wilson is in his eighth. And yes, the superb performances thus far by Dak Prescott in Dallas, Aaron Rodgers in Green Bay and Jimmy Garoppolo in San Francisco warrant them being in the conversation among the QBs.
There are five more weeks to state their cases, too, so for anyone — media outlet, player, fan — to declare a small group as top candidates is beyond premature.
“In my experience, whenever I talk to the other voters I know, ‘who has waited’ never comes up,” says SiriusXM NFL Radio host Bruce Murray, a voter who through his program gets to speak regularly with people who understand the awards process and requirements. “It’s all about the single current season, who the best player has been, and who deserves it. And it drives me crazy when people just throw that statement around. It’s almost insulting and ignores the fact that we take this responsibility seriously. I know I would never play the ‘next man up’ card.”
A look at past winners of all the AP awards shows that a “next man up” mentality has never existed. Otherwise, head coaches early in their careers such as Sean McVay and Matt Nagy the past two years might have been bypassed. J.J. Watt, who when healthy probably has been the best all-around player in the league, took Defensive Player of the Year honors in 2012 — his second pro season. He won it two of the next three years, too.
It’s true that quarterbacks have dominated the MVP voting for decades, and Murray understands why. But to totally ignore players at other positions, particularly before Week 12 has been completed, is ludicrous.
“There is no question there is a bias toward quarterbacks, and in fairness they do touch the ball on every play,” he says. “But I’m bothered by the fact that some dismiss other players who should be considered. I think Dalvin Cook is a great example. Just look their success with him, and lack of without him in Minnesota.”
A great point. While the QB whisperers mention Kirk Cousins as a potential league MVP, many around the Vikings, including his teammates, cite Cook as the key to the Vikings’ success.
Cook; Christian McCaffrey, the Panthers running back having a stunning season on a mediocre team; Michael Thomas, who is headed for record production as a receiver in New Orleans. They all have caught the eye of Gannon, the 2002 MVP whose analyst work with CBS and elsewhere affords him the chance to do NFL almost 24/7.
“As a voter, I really struggle with it, it seems so often (people) sometimes they look at purely stats,” he says. “It is not about numbers only.
“I look at McCaffrey and the type of season he has had in Carolina, he has been incredible. They have had injuries on the offensive line, don’t have their starting quarterback (Cam Newton), and have a guy relatively brand new at it in (Kyle) Allen. McCaffrey is a big part of what they do, and look at his production and his size — I think, that guy is an MVP. Also look at Dalvin Cook and the impact he has had on Kirk Cousins and the Vikings.
“For the MVP to me, I am looking for the person who had the biggest impact on his team and on the league, like Patrick Mahomes or Drew Brees last year. Sometimes it is so close and this year is like that. You can’t rule out any of these guys, and there’s still five games to go.”
___
More AP NFL: https://apnews.com/NFL and https://twitter.com/AP_NFL

When NFL needed change, Paul Tagliabue was choice in…