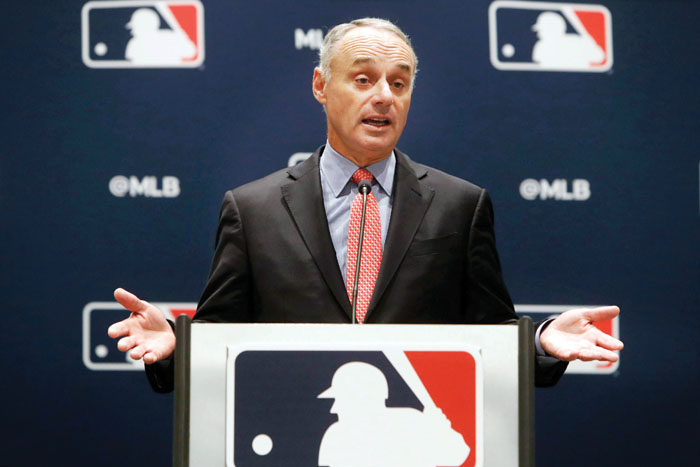 ARLINGTON, Texas (AP) — Major League Baseball has widened its investigation of alleged sign stealing by the Houston Astros and will probe activity by the team over the past three seasons.

After the conclusion of owners meetings Thursday, baseball Commissioner Rob Manfred said MLB will “investigate the Astros situation as thoroughly as humanly possible.” The probe includes the team’s firing of an assistant general manager during the World Series for clubhouse comments directed at female reporters, behavior the club at first accused Sports Illustrated of fabricating.

“That investigation is going to encompass not only what we know about ‘17, but also ‘18 and ‘19,” Manfred said. “To the extent we are talking to people all over the industry, former employees, competitors, whatever. To the extent that we find other leads, we’re going to follow these leads.”

Manfred has said for now the Astros are the only team being investigated for cheating allegations.

“Our clubs, all 30 of them, recognize that the integrity of the competition on the field is crucial to what we do every day,” he said. “I think that there’s wide support across the industry for the idea that when we have a problem in this area, there should be firm, serious disciplinary action that discourages people from engaging in this type of behavior.”

Oakland pitcher Mike Fiers told The Athletic in a story last week that while he was playing with the Astros during their 2017 World Series championship season the team stole signs during home games by using a camera positioned in center field. During this year’s playoffs, Houston players were suspected of whistling in the dugout to communicate pitch selection to batters.

Asked if he wished more had been done before Fiers spoke out publicly, Manfred said baseball has chased every lead it has received to the “the extent that we felt was investigatively possible.”

“Obviously, an individual breaking what is a pretty firm commitment to silence about what goes on in dugouts and in clubhouses is a big break in an investigation, provides an opportunity to push forward that we haven’t had previously,” Manfred said.

“It’s a challenge for our sport and all sports to regulate the use of that technology in a way that makes sure that we have integrity in our play,” he said.

When the Red Sox were fined, only weeks before the Astros won their first World Series title, Manfred said all 30 clubs were notified that future violations would be subject to more serious sanctions, including the possible loss of draft picks.

“I wrote what I wrote because I did not believe that the discipline that have been handed out in the past were in line with the significance of the issues that we deal dealing with,” he said. “I viewed them with a particular level of seriousness.”

As whether he felt that was sufficient and his message received, Manfred responded: “Well, we know at least one instance it probably wasn’t heeded.”

Astros owner Jim Crane declined comment on the allegations when he was seen in the hotel lobby Wednesday, and Manfred wouldn’t talk about any conversations they had this week.

In other issues addressed during the meetings at a luxury hotel adjacent to the new $1.2 billion Texas Rangers ballpark that will open next season:

John Sherman was approved as the new controlling owner of the Kansas City Royals, and his group plans to close its deal to purchase the last-place team from David Glass and his family next week. The proposed sale was announced Aug. 30 and was expected to be worth about $1 billion.

While MLB and the players’ association decided to start labor talks more than two years before their contract expires in December 2021, negotiations with union head Tony Clark and top lawyer Bruce Meyer have not progressed.

“Mr. Meyer suggested a series of changes that would turn the Basic Agreement back 50 years, I mean essentially give back to the union everything we’ve achieved over the last few decades,” Manfred said.

Owners supported Manfred in a proposal to require a three-batter minimum for pitchers next season, a rule MLB has the right to change for 2021 even without the union’s agreement.

Owners voted to have digital streaming rights within a team’s broadcast market revert to each team from Baseball Advanced Media starting with next season. That could lead to the Yankees’ YES Network being streamed on Amazon Prime and similar deals. Amazon bought an equity stake in YES this year.

Greg Johnson was approved as the new controlling owner of the San Francisco Giants. Giants president and CEO Larry Baer still will represent the club at the meetings, along with Johnson and Rob Dean, who had been handling leadership duties since March. Baer was suspended without pay from March 4 through July 1 after a video showed him in a physical altercation with his wife.