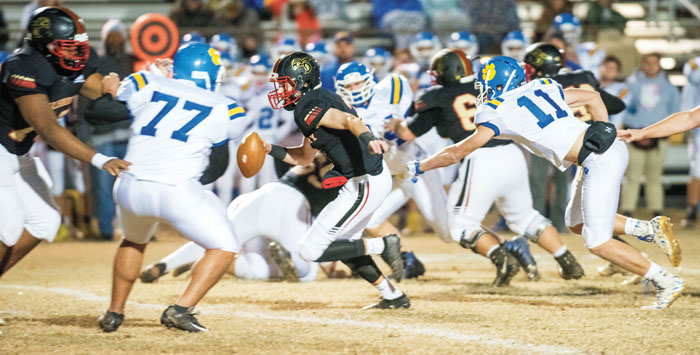 “Pizza — that’s excellent motivation,” senior center Chad van der Poel said. “The nice thing is we’re blocking for guys who can get us 300.”

When Salisbury opened this season with a paltry 88 rushing yards against North Rowan in a 9-7 victory, there appeared to be a better chance of the Hornets’ offensive line landing on the moon than paving the way for a 300-yard night.

But head coach Brian Hinson went to work. So did Fender. The Hornets’ offensive line has made strides. There are holes now for long-striding junior quarterback Vance Honeycutt, for tough, consistent junior Mike McLean and big, fast freshman JyMikaah Wells.

“We really struggled early,” Fender said. “We moved some guys around. We got everyone in their best positions.”

Salisbury is known for athletes, for flying around, for creating big plays, for producing running backs and linebackers. The offensive line has not traditionally been a strength for the program, but it’s an area that Hinson, an All-America offensive lineman in his playing days at Catawba, has worked to beef up. No great team has a shaky offensive line, and Hinson’s goal is for the Hornets (10-2) to be great.

Fender came from the mountains (Mountain Heritage High in Burnsville) to play for Catawba and excelled at Shuford Stadium during a period in which Hinson was Catawba’s offensive line coach. Fender stood out whether he was stationed at guard or center and started 44 games in his college career. He wasn’t an All-American, but he was All-South Atlantic Conference in 2014, his senior season. He knows what he’s doing.

“There are a lot of reasons for our offensive line improving,” Fender said. “But it all starts with Coach Hinson getting those guys to believe in the weight room. Except for Peele, they’re not huge guys, but they’ve all gotten a lot stronger. The other thing is most of them have been with us now for three years. That helps.”

Fender points at Evans as the player who has improved the most over the course of the season. That makes sense because he’s also the newest guy, after being homeschooled last year.

“He was a question mark when we started, but not now,” Fender said. “He’s come far. He’s been a very positive addition.”

Evans won over his teammates.

“The first couple of weeks he was behind and struggling with learning everything,” van der Poel said. “But once he got accustomed to everything, we could see what a hard-nosed player he was.”

After the struggle against North Rowan, the Hornets started grinding out 200-plus rushing yards in their next three games, but 300 still seemed a long way off.

Jenkins was starting as a guard early in the season. He suffered an injury that brought temporary adversity, but it turned out to be an opportunity for the Hornets to improve.

“I sprained my ankle against Thomasville (the Hornets’ third game and conference opener) and then I missed the game with West Davidson the next week,” Jenkins said. “The next game was Lexington, and we had a tackle out, so when I came back they moved me to left tackle.”

Salisbury produced another rushing game in the 200s against Lexington, then took a step back the next week, with the team’s worst offensive showing since opening night in a 10-0 win against Central Davidson.

When another dismal, turnover-plagued offensive game followed and led to the team’s first setback at Oak Grove, people were jumping off the Salisbury bandwagon at a frantic rate.

But the following week, Oct. 18 at Ledford, proved to be the most critical game of Salisbury’s regular season. The Hornets were reeling, and a very stout Ledford program, whose strength was on the defensive side of the ball, had owned them in recent seasons.

“After losing at Oak Grove, we knew how big the Ledford game was,” van der Pohl said. “It was time to make a statement against a good defense. We showed out. Our pass protection was on point. McLean had a run of 80-some yards and Wells had a long touchdown run also.”

Salisbury beat Ledford in stunning fashion, 30-6. That was a season-changer, maybe a program-changer.

“A lot of people said it was the first game in a long time where Salisbury had won a game it wasn’t expected to win,” Jenkins said.

Best of all, buoyed by McLean’s 177, Salisbury rushed for 300 yards for the first time this season.

The next week, at home against East Davidson, the Hornets piled up 334 rushing yards. The pizza was good.

Not that Salisbury’s offensive line ever gets a chance to relax. Fender, Jenkins and van der Poel all agreed the best defensive front Salisbury has faced all season are those guys who line up across from them every day in practice. Salisbury’s defense has been astounding and, in an era that produces crazy scores every week, allows a stingy 8.1 points per game.

“Our offensive line guys take a beating from those guys a lot of days,” Fender said. “It’s easy to get frustrated, but I remind them they’re lining up against some real monsters. They just have to keep working.”

Ask Salisbury’s linemen about their defensive teammates, and they shake their heads.

“It’s tough,” Jenkins said. “But we know strong competition makes us better. We have to really focus in practice.”

Last Friday in the first round of the 2AA playoffs, the rough practices paid off. Salisbury wore out a decent Mount Pleasant team, 45-7, and smashed the Tigers on both sides of the ball. The Hornets rushed 45 times for 312 yards, meaning another round of pizza, while allowing about 1 yard per carry on defense.

“The Ledford and Mount Pleasant games were the two best games our o-line has played, and Mount Pleasant was the most complete offensive game we’ve had,” Fender said. “We have three talented guys carrying the ball. We do realize a lot of times those guys can make our o-line look good.  But, every now and then, our 0-line makes our backs look good.”

The Hornets face an enormous undertaking tonight. They are in the 2AA East bracket as the No. 7 seed and face a massive road trip to Washington. They’ll roll 232 miles, past Raleigh, Wilson and Greenville, all the way to the coast. Once they get there, they’ll face a stout squad, the No. 2-seeded Washington Pam Pack (9-3).

“This will be a challenge for our o-line guys,” Fender said.  “Washington’s defense looks a lot like the guys we see in practice.”

College Basketball: Livingstone men are ready for a big…