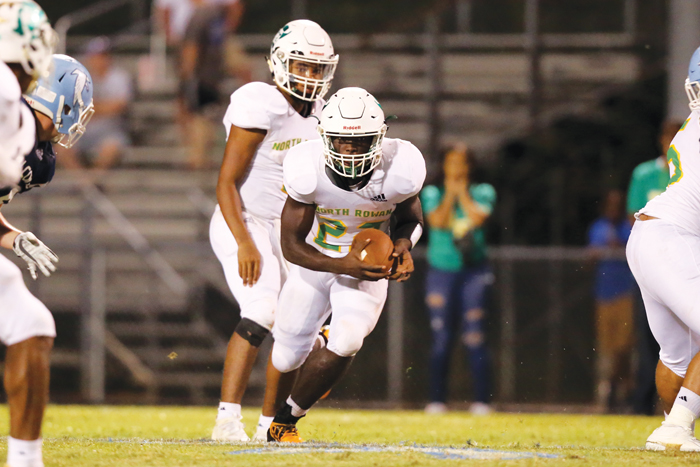 Thursday marked the 50th anniversary of Shelby’s 40-0 rout of Hudson in a WNCHSAA bi-conference championship game played at Lenoir-Rhyne and East Rowan’s 23-22 win at Concord in the game to decide the championship of the North and South Piedmont conferences.

It was the 12th triumph in a row for coach W.A. Cline’s East squad, but seriously out-sized and representing the North Piedmont, the conference that was mostly rural schools, the Mustangs were substantial underdogs on the road.  The NPC had dropped seven straight title games to the SPC before East’s breakthrough victory, and most had been one-sided. On a local level, it was comparable to the AFL’s New York Jets’ world-shocking upset of the NFL’s Baltimore Colts. The third Super Bowl had been played in Miami 10 months before East’s dramatic victory.

With West Rowan (at No. 1 seed Crest) and Salisbury (at No. 2 seed Washington) facing challenging playoff road games tonight, there’s some hope that they’ll be inspired by the exciting win by the Mustangs 50 years ago.

As far as North Rowan, the fourth-seeded Cavaliers, who had a bye last week, return to the field tonight at home. Their 1AA East game against fifth-seeded Princeton will be a collision of styles.

The North-Princeton matchup has amazing roots, for it was Salisbury native Harvey Brooks who started football at Princeton, a small school 12 miles northwest of Goldsboro, 48 years ago.  Brooks gleaned his football knowledge from legendary coach Bill Ludwig at Salisbury’s Boyden High in the 1940s. Princeton will trot out the same ancient single-wing offense that brought Ludwig state championships at Boyden in 1955 and 1957. There’s occasional deception with the single wing, but mostly it’s sledgehammer football. A Princeton team with very large linemen is going to try to run the ball right over the Cavaliers, who are going to have a serious speed advantage.

At Eagle Stadium in Spencer, it’s going to be like being caught in a time warp, watching 2019 football against 1949 football.

Some fans have never heard of Brooks, who died at the age of 89 two years ago, but he’s one of the legends of coaching in North Carolina. In 2010, he was inducted into the NCHSAA Hall of Fame.

Brooks, who was born in 1927, played fullback and blocking back for Ludwig’s Boyden Yellow Jackets. Brooks also was a tremendous punter. He averaged 44 yards.

Military service came next for Brooks. While he was in the U.S. Marines and stationed at Camp Lejeune, he discovered what he loved — instructing fellow Marines in football. But after he was discharged, he came back home to Rowan County and put his coaching dreams on hold. He went to work for the railroad in Spencer and started a family. He was a Spencer Jaycee and a member of Salisbury’s First Baptist Church.

It was in the mid-1950s when Joe Ferebee,  who had been Ludwig’s backfield coach at Boyden, convinced Brooks to enroll at Pfeiffer College to get his degree. If he got a degree, he could find a coaching and teaching position.

Brooks had a wife and two daughters, by then, so he continued to work for the railroad while he tried to stay awake in his Pfeiffer classes. The dean called Brooks in one day, and he thought he was getting kicked out of school. Instead, he and his wife were offered the job of house parents for a Pfeiffer dormitory. So Brooks was able to leave the railroad and still get a paycheck. He earned his degree in physical education. When he graduated from Pfeiffer in the spring of 1960, he was certified to instruct football, basketball, track, baseball, golf, tennis, wrestling and soccer.

He’d been hired to be physical director of the Leaksville YMCA, near Eden, but then he got a chance to teach and coach at Norwood High in Stanly County, closer to home. That’s where his football coaching career started. When Norwood and Aquadale were consolidated into South Stanly High in 1962, he became that school’s first football coach. Jimmy “Bubba” Lisk became an All-America legend as the tailback taking the snaps in Brooks’ single-wing offense.

In 1967, Brooks carried the single wing to John Graham High in Warrenton.

In the fall of 1971, Brooks arrived at Princeton High, eager to embrace the opportunity of starting his own football program from scratch.

Dave Hunt, who later would become a fixture on great coaching staffs at Davie and West Rowan, was there with Brooks, and witnessed the start of the program. Potential Princeton players were in the gym, meeting Brooks for the first time. Brooks gave an impassioned speech about coming out for the football team. The kids didn’t seem excited about it and one informed Brooks that they were basketball players, not football players. Brooks’ answer was that he’d also been hired to coach the basketball team, so it was in everyone’s best interest to play football. Then he picked up the nearest football, fired it the length of the court, watched it swish through the net, and walked out of the gym without another word.

The next day, a lot of Princeton kids who had never watched a football game, much less played in one, came out to play for Brooks. Princeton won some games that first year, and Brooks was just getting started. His single-wing offense was so old, it was new. No one could stop it. Princeton started to roll, putting up staggering rushing totals. In 1976 and 1979, Brooks took single-wing teams to the 1A state championship game. From 1977-80, a Princeton back named Mike Atkinson set state records for rushing and scoring that would stand for decades, until backs such as A.L. Brown’s Nick Maddox, Albemarle’s T.A. McLendon and West Rowan’s K.P. Parks came along.

Brooks stayed at Princeton through 1986, piling up victories.  That’s why today’s Princeton Bulldogs play their games on Harvey Brooks Field.

In recent seasons, Princeton has continued to smash for astronomical rushing totals with the single wing.

And now the Princeton Bulldogs come to Spencer on what might be an unforgettable night. The Massey Ratings score projection is North 28, Princeton 27.

There are so many teams from the five area conferences still alive that we’ll stick with just picking the locals this week. The schedule: Princeton at North Rowan in 1AA; West Rowan at Crest in 3A; Salisbury at Washington in 2AA; A.L. Brown at Watauga in 3AA, and Davie at East Forsyth in 4A.

I’ll make North Rowan a unanimous pick because I think the Cavaliers are going to score a ton of points. West has the linemen to compete with anyone, but I’ll go with Crest. The magnitude of Salisbury’s trip to the coast is scary, but I think the Hornets can still win. I’ll go with Watauga and East Forsyth.

With basketball season here, I’ll mention that Salisbury will tangle tonight with the high school that gave the world Dominique Wilkins, while West battles the school that produced David Thompson.

Princeton was unbeaten until it lost to rival Rosewood on the final night of the regular season.

Malcolm Wilson (29 touchdowns) is having another special season for the Cavaliers, but this one probably comes down to whether a North defense, led by linebacker Jordan Goodine and DB Zay Davis, can deal with Princeton’s unique offense.

Princeton is coached by Travis Gaster, who played for his father, Jack, during some tremendous seasons at Albemarle.

North Rowan hasn’t been tested in a long time. That could be a factor. North’s bye week came late. Then it had a pretty easy game (47-0) against South Davidson to close the regular season. Then it had another bye in the first round of the playoffs. On the positive side, the Cavaliers are healed and rested. Princeton demolished its first-round playoff opponent, plowing East Carteret, 62-7.

Crest is the definition of a perennial power and won 3AA state titles in 2014 and 2015, but the Boiling Springs-based Chargers have lost in the second round the last three seasons, including a shellacking by West Rowan in Mount Ulla in 2016. West lost to Crest in playoff games in 2002 and 2014.

Crest’s only losses this season were to fellow Cleveland County powers Burns and Shelby back in September.

Jalen Houston, who has rushed for more than 1,400 yards, is the primary offensive weapon for the Falcons.

Crest is a 12-point favorite, according to the Massey Ratings, but this isn’t an impossible game for West, by any means. West has lost only once since Sept. 20. That was to undefeated  Statesville in overtime.

Why is Washington the Pam Pack? Apparently that comes from the Pamlico Packing Company ( a seafood enterprise), a benefactor of the team long ago.

Washington is a triple-option team, something the Hornets have seen very little of this year, but Salisbury’s defense is athletic enough that it should be able to adjust from flying around to playing assignment football.

Washington QB Antwone Godley only throws four or five times per game, but he’s a 1,000-yard rusher, along with teammates Jaden Hambric and Terry Moore.

Washington’s losses have been to D.H. Conley (9-3), West Craven (9-3) and unbeaten Tarboro.  Tarboro, which is in the 1AA East bracket, routed Washington, 47-0, which says something about how scary Tarboro is. (If North Rowan wins tonight, Tarboro is the next stop).

Offensively, the Hornets are solid on the ground, and quarterback Vance Honeycutt has evolved into a true dual-threat guy.

Despite the daunting trip and the seeding disparity, Salisbury is a Massey Ratings five-point favorite. If Salisbury pulls this one out and North Davidson wins tonight at Herford County, the Hornets would get a home game next week.

A.L. Brown’s zany 56-50 road win at T.C. Roberson last week behind five Jakhiry Bennett TDs is still being talked about. Now the Wonders head to Boone to take on a Watauga team that wiped out T.C. Roberson, 50-21, on opening night.

A lot of points are expected to be scored. Watauga has topped 60 frequently.

Despite the seeds and Watauga’s 7-0 home record, the Wonders, who are 12-point underdogs, have a reasonable chance.

It’s encouraging for the Wonders that Watauga’s loss was 63-35 to Reagan. Reagan is good, but Davie beat Reagan. A.L. Brown beat Davie. Comparing scores doesn’t necessarily mean a lot because teams match up differently, but the Wonders don’t appear to be in over their heads. They should be able to score 40, or even 50.  If they can get a few stops, who knows?

The problem Watauga presents for every team is quarterback Anderson Castle, a serious athlete who probably will play slot receiver or safety for North Carolina in the Shrine Bowl. Castle has  mind-blowing stats. He’s rushed 191 times for 1,801 yards and 29 touchdowns, and he’s added 12 TD passes.

It’s a rematch for Davie which lost to its Central Piedmont Conference rival three weeks ago, 49-35.

Davie is a 19-point underdog.

Like the first meeting, Davie will be making the trip to Kernersville.

In that first meeting, East Forsyth rolled for 455 yards on the ground, so Davie has to do a better job in that area to spring the upset.

Offensively, Davie doesn’t have much to work on. Davie can move it against anyone. Nate Hampton, Tate Carney and Jack Reynolds are putting up staggering numbers. Hampton has surpassed 3,000 passing yards.