High school football: Houston likes having the ball in his hands 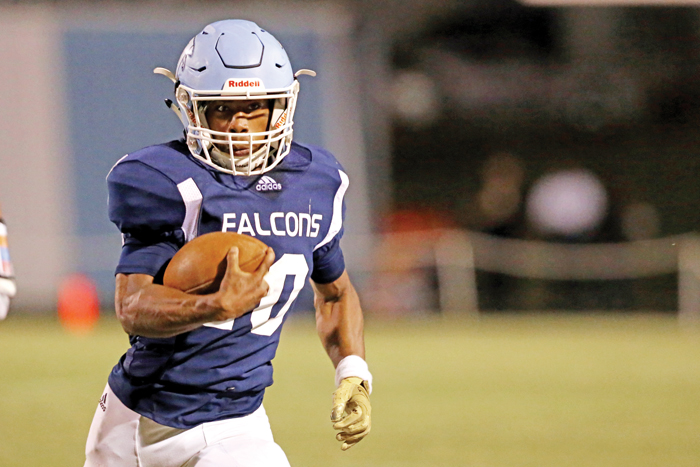 So he sacrificed some individual glory when he was moved to running back during West’s fourth game. He’s more than OK with it. He’ll trade records for wins anytime.

“I love being a running back, just really love it,” Houston said. “This is who I was when I was growing up. I think everyone wants to be that man with the ball in his hands when the game is decided. You want to try to help your team win. I get a lot more chances to do that as a running back.”

West began this season with the offensive plan of punishing opponents with a power running game built around the bullish downhill charges of 215-pound Michael Gonsalves. In West’s first four games, Gonsalves amassed 91 carries for 371 yards and five touchdowns.

But Gonsalves suffered a season-ending knee injury in that fourth game. Cayleb Brawley also had been running the ball effectively for West as a changeup back to Gonsalves, but coach Joe Nixon didn’t want the 150-pound sophomore to have to take on the entire rushing load. It’s a very heavy load. West likes to run the ball 50 times per game. So the Falcons made a move with Houston. In 15 carries against Davie, a good 4A team, he picked up 108 yards after Gonsalves went down. That was the start of big things.

“Mike got hurt, and we had to find ways to keep moving the football,” Nixon said. “Jalen is a very special guy and we knew we needed to get the ball in his hands more, so we switched him to running back. What we’ve found is it’s a whole lot to easier to hand it to him than to throw it to him.”

Houston isn’t large, just 160 pounds, but he runs with surprising power, fierce determination and crazy acceleration. For defenders, it’s like trying to tackle a human cannonball that is constantly spinning and churning.

Statesville is undefeated for a reason. The Greyhounds have a stiff defense. But on the final night of the regular season, Houston carried it 29 times for 166 yards in West’s overtime loss to the Hounds in Mount Ulla.

“Houston is fast, he’s quick, he’s elusive, and he’s tough,” Statesville coach Randall Gusler said. “He’s got different gears. You think you’ve got him hemmed in, but then he’s out of there. He’s a handful.”

Houston takes much more of a physical pounding as a running back.

But that comes with the territory.

“I’ve taken a pretty good licking, and I can feel it every Saturday when I get up,” Houston said. “But I’m hoping that the guys who tackled me are feeling me some, too.”

Houston, whose older brother, Juwan, also shined for West football and track and field, brings electrifying wheels to his new job. He’s already a six-time individual champion in Rowan County track meets. He’s won two crowns in the 100 meters, one in the 300 hurdles, and he’s taken three straight in his main event, the 110 hurdles. He’s also been on relay winners.

“Our guys love blocking for him,” Nixon said. “Jalen doesn’t need a hole, he just needs a little crease. And he’s got that chance to go all the way every time he touches it.”

That was never more evident than in West’s first-round playoff game last Friday in Morganton against Freedom High.

The 8 vs.9 game was considered a toss-up, but Freedom took the opening kickoff and scored, recovered an onside kick and scored again. West was down 12-0 before it had the ball.

“They scored at the start, but we were excited about getting the ball and tying it up, and then we didn’t get the kickoff and they got another touchdown,” Houston said. “But my mindset was I wasn’t going to let it end like this, not my senior year. The first time I touched the ball, I was thinking nothing short of the end zone. I read it right, and our guys blocked it perfectly.”

Houston went 73 yards to score. The Falcons were back in the game. West (8-4) would take control from there, scoring five unanswered touchdowns. The Falcons won, 42-32.

It was a standard night for Houston —  22 carries, 195 yards, three touchdowns. His season high was 234 yards against East Rowan, a night on which both Houston and Brawley topped  200 yards behind West’s powerful offensive line.

“Jalen has learned a lot this season about being a running back,” Nixon said. “He’s learned patience, to let guys make their blocks. Then he can explode.”

For the season, Houston has carried 180 times for 1,447 yards and 14 TDs. His rushing stats are almost identical with those of North Rowan senior Malcolm Wilson, the reigning Rowan County Player of the Year.

Sophomore quarterback Noah Loeblein has hit Houston four times for touchdowns through the air. So there’s still the threat of him catching the ball out of the backfield and flying for six quick points.

Houston entered this season tied for seventh all-time in Rowan County in receiving yards and tied for 12th in receptions.

He now owns some of the more diverse and unique career stats in county history with 1,745 career rushing yards and 116 catches for 2,561 receiving yards.

Even though he’s caught only 16 passes as a senior, he’s now second on West’s all-time list in receiving yards, trailing only Kortez Weeks (2,806). He’s fourth in county history. The other two ahead of him are East Rowan’s Seth Wyrick and Johnny Yarbrough, who was catching touchdown passes from C.M. Yates 50 years ago.

Houston has scored 50 touchdowns in his fabulous career. A lot them have been on huge plays, momentum-changers that meant victories.

“I know we’re big underdogs,” Houston said. “But we’ve got nothing to lose. We’re excited about the chance to play the No. 1 seed.”