From good Samaritan to fire training instructor at RCCC 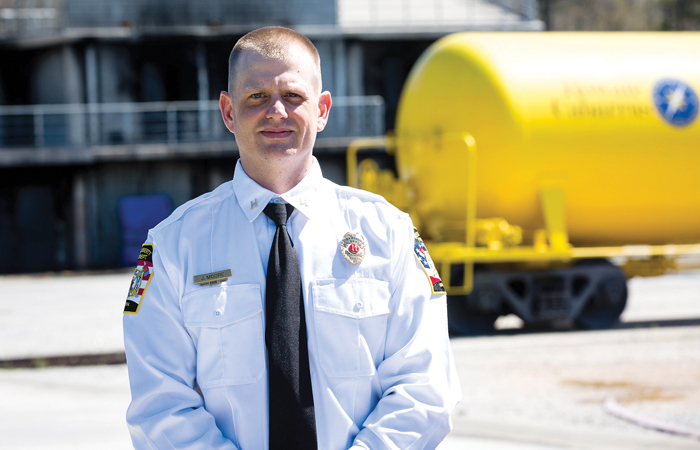 Submitted photo After helping at the scene of an accident, Jess Moore found his calling as a firefighter and instructor.

SALISBURY — Jesse Moore’s unexpected turn as a good Samaritan led him to discover a new purpose in life — first as a volunteer firefighter, and later as a fire instructor at Rowan-Cabarrus Community College.

It was four years ago that Moore heard a car horn blowing as he drove through his neighborhood and discovered an overturned Ford Explorer and the injured driver who had been ejected from it. He called 911 and stayed with her until help came.

He called her pastor and traveled to Winston-Salem to visit her in the hospital. And all the while, he kept thinking how fulfilling it was to be able to lend a hand and about the many emergency personnel who had shown up to help at the scene.

“I found myself thinking about the fire department and wondered if there was something I could do to help them. I worked from home, and I figured it was hard for them to find help during the day,” said Moore, who operates Fox Custom Motorcycle Paint Shop. “I made a call to ask about it, and three days later I was filling out an application to be a volunteer firefighter.”

He enrolled in the fire training program at Rowan-Cabarrus to earn his initial certification and continued on to become a fire officer and an adjunct fire and rescue instructor at the college.

“I didn’t think it could get much cooler than being a firefighter, but I kept going, and now I am truly the luckiest guy on earth,” said Moore, who serves with the Liberty Fire Department.

The program is nationally recognized for its commitment to the Fire & Emergency Services Higher Education model of standardized professional development education criteria.

“I was impressed that the instructors were so forthcoming with all of the knowledge that they had, but I also learned it’s an injustice not to be,” Moore said. “It’s unlike any career I’ve ever seen. You don’t hold anything back. You pass every bit of knowledge you have to every single person, because you want to give the community great service and keep people safe.”

Moore loves to brag on the firefighter training program at Rowan-Cabarrus, from the directors and instructors to the first-rate fire training facilities at the college’s North Campus in Salisbury.

Thousands of firefighters have completed initial certification and continuing education through the program, and the college broke ground in February on a five-story fire training tower to allow firefighters to experience escaping from confined spaces or entrapment.

Moore had always wanted to go to college but lacked the financial means. Once he had built his own successful business, he stuck with it. Now, he says he has the best of both worlds, thanks to free certification opportunities and other financial assistance available through Rowan-Cabarrus.

“Jesse truly is a person who always wants to keep learning,” said Lee Ennis, program chairman of the fire protection program. “He understands that a firefighter’s education never ends. Knowledge must continue to expand as tactics, building construction and other aspects of the industry change. He also knows how to gain the respect of those he works with and teaches, and he has become an asset to us.”

Until that fateful day four years ago, Moore had never stepped foot in a fire department, called 911, or thought about fighting fires. Today, he considers firefighting a calling he was born to answer.

“The brotherhood and strength of the firefighting community speaks to me. It builds something inside of you that you don’t find in anything else, unless it’s a related type of service,” Moore said. “It’s about shared courage, passion and trust. There is no greater statement of faith than a man laying down his life for another. We don’t look at color or political affiliation when we respond to a call. My faith tells me, ‘Love thy neighbor,’ and that’s what we do.”

Cabarrus Shrine Club gearing up for another Breakfast With…