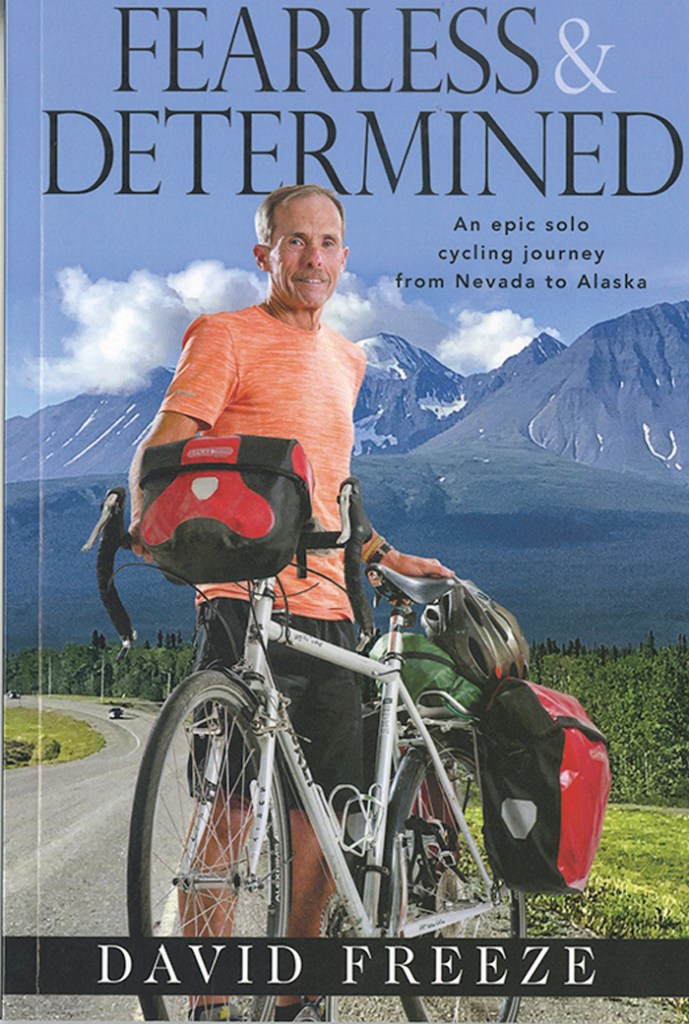 David Freeze is nothing if not determined, and persistent.

Since his first long-distance bicycle trip in 2013, he has chased his passion for seeing the 50 states from the seat of one bike or another.

His most recent trek, from Nevada to Alaska, was quite the adventure.

He shared some of it with Salisbury Post readers this summer, detailing exhausting rides, poor conditions, an encounter with a bear, lack of supplies and one new experience after another.

As he has done since the beginning, Freeze kept copious notes, not just for his columns in the newspaper, but more, and soon after he was home and rested (maybe sooner), he compiled a book based on this massive trek through true wilderness.

Our interest is, of course, to support one of our frequent contributors, but also to let people who didn’t follow the trek know that his book, “Fearless & Determined: A Epic Solo Cycling Journey from Nevada to Alaska,” is one full of details and inspiration.

David’s faith in God is strong, and his oft-repeated prayer, “Lord, ride with me today,” kept him going on days when the trip seemed more like punishment. His faith is inspiring, as well as his determination to set out on a task and complete it. He also gives encouragement to people who want to try something new or different and might hesitate. The time is now, don’t wait.

Freeze is known as a runner, having logged 86,000 miles, but he is also now known for these ambitious trips. He’s determined to travel all 50 states by bike. How many have even attempted to drive through all 50 states? He follows historical routes, such as the Underground Railroad and Route 66. He made his way across the country, Oregon to South Carolina. He cycled from Maine to Key West, Florida.

He’s not easily discouraged, despite having a serious problem with blood clots after his first journey. On the Alaska trip, he often had no way to communicate, as previously promised cell phone and iPad connections failed to work. And he slept rough many nights.

A vegetarian, Freeze resorted to junk food just to give him energy and sustenance, though his biscuit breakfasts are his favorite.

Weather, poor road conditions, surprise route changes, big trucks — Freeze has seen them all. During one trip, he was hit by a car and his bike was totaled, but he continued as soon as he could get a replacement bike.

In all the trips, he has relied on some planning and some good luck. The people he has met along the way have helped him, and emphasized his faith in his fellow humans. People are almost always helpful.

The trip to Alaska was not without its rough spots. His first night was spent in the back of a pickup truck because the campground he selected was closed. The next night he slept among huge piles of gravel, since he finished the day in a tiny ghost town.

Winds from every direction threatened to blow him over, and the hills turned into long, hard climbs.

“Fearless & Determined” reads like an adventure story, which is what it is. It’s also something of a thriller as you wonder if he’ll make it to the next destination, or if the bears will see him as a snack, or if the thunderstorms will blow him off the road.

By sheer will, he overcomes the obstacles.

He was halfway to Anchorage when he went from a pasture full of daisies to one of the worst roads on the trip: “I pedaled onto a road that would become almost unbearable. Finished in a tar-and-gravel style of repaving, the road was not just rough; it also was quite dusty … The dust was building, especially since a great number of the vehicles were trucks with multiple axles … I began to taste the gravel dust in my mouth and closed my eyes as often as I could. I was miserable.” But he keeps pedaling, covered in dust, and finally lands on a decent road. And he makes his goal for the day — 92 miles.

When Freeze knew he had a tough road ahead, he asked for help: “As I started the climb, I sent an email to a friend who had a circle of available prayer warriors. I asked if we could all have prayer together and ask for the travel to get easier soon.

“…What happened next astounded me. We had prayed to help me get out of this hot, dry, very hilly experience and that I would make better time as the day headed toward evening. Within 20 minutes, I started a miraculous downhill that stretched out for 20 miles. Spectacular scenery soon filled in all around me.”

“Fearless & Deterined” includes many black-and-whie photos Freeze took of the people he met along the way and some of the scenery he saw.  For others who aspire to a long trek, he adds a chapter on the gear he used, where he got it and if it worked.

Freeze will be at Rowan Public Library’s East branch in Rockwell on Tuesday at 6 p.m. to talk about his journey and share photos. The event is free and open to the public.

Meet the cast of ‘The Stinky Cheese Man and…