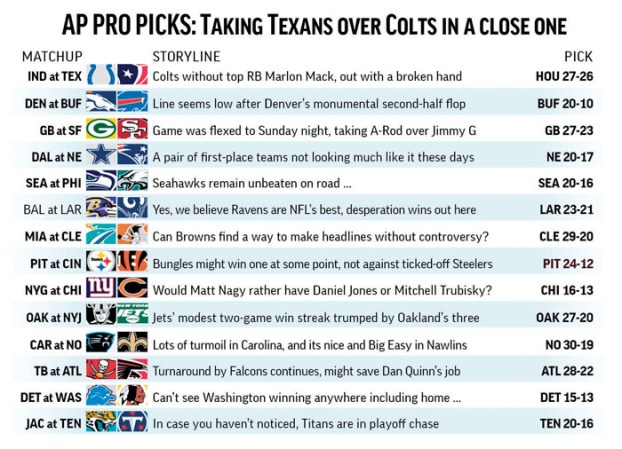 By BARRY WILNER AP Pro Football Writer
Earlier in the schedule, the AFC South looked like one of the NFL’s deepest divisions. That might still be true, though none of the four members has exactly distinguished itself.
Certainly, the Texans didn’t when they got mauled last week in Baltimore. As for the Colts, whom they host on Thursday night, few teams are more inconsistent than Indy.
Both are 6-4 and because they have not been able to put distance between themselves and Tennessee, there’s not certainty that Colts-Texans will be a defining game in the division.
Still, with the Colts owning a victory over Houston, they would take a mammoth step toward another postseason berth if they can sweep the Texans.
They’ll be trying it without top running back Marlon Mack, out with a broken hand. Backup Jordan Wilkins says “no worries.”
“We’ll be ready,” he says. “It’s a big game because it’s a division opponent, but we’ve got to be ready for the whole 60 minutes.”
Houston barely played any minutes against the Ravens and probably is thankful to get back on the field so soon.
“It is a must-win Thursday,” star receiver DeAndre Hopkins says. “Everyone knows that. We have to move forward. What we want is still ahead of us. So, that means focusing on the Colts now.
“Houston, tied for No. 11 in the AP Pro32 with Indianapolis, is a 4-point choice over the Colts.
TEXANS, 27-26
KNOCKOUT POOL: Like most of America, a slump has hit with such picks. The Panthers turned out to be an awful choice. Hopefully PITTSBURGH is a more enlightened one.
No. 26 Denver (plus 4) at No. 10 Buffalo
This line seems kind of low as Broncos come off monumental second-half flop.
BEST BET: BILLS, 20-10
No. 5 Green Bay (plus 3 1-2) at No. 3 San Francisco
NFL loved this matchup so much it was flexed to Sunday night. Taking A-Rod over Jimmy G.
UPSET SPECIAL: PACKERS, 27-23
No. 9 Dallas (plus 6) at No. 2 New England
A pair of first-place teams not looking much like it these days.
PATRIOTS, 20-17
No. 4 Seattle (plus 2) at No. 15 Philadelphia
It sure would be nice to see what a healthy Eagles team looks like. Seahawks remain unbeaten on road.
SEAHAWKS, 20-16
No. 1 Baltimore (plus 3) at No. 13 Los Angeles Rams
Yes, we believe Ravens are NFL’s best. But desperation wins out here.
RAMS, 23-21
No. 29 Miami (plus 11) at No. 20 Cleveland
Can the Browns find a way to make headlines without controversy? Probably not.
BROWNS, 29-20
No. 17 Pittsburgh (minus 6 1-2) at No. 32 Cincinnati
Bungles might win one at some point, just not against ticked-off Steelers
STEELERS, 24-12
No. 30 New York Giants (plus 7) at No. 22 Chicago
Wonder if Matt Nagy would rather have Daniel Jones than Mitchell Trubisky.
BEARS, 16-13
No. 14 Oakland (minus 3) at No. 28 New York Jets
The Jets’ modest two-game winning streak is trumped by Oakland’s three-gamer. Make that four …
RAIDERS, 27-20
No. 16 Carolina (plus 8) at No. 6 New Orleans
Lots of turmoil in Carolina, and it’s nice and Big Easy in Nawlins.
SAINTS, 30-19
No. 27 Tampa Bay (plus 4) at No. 24 Atlanta
Nice turnaround by Falcons continues, perhaps saves Dan Quinn’s coaching job.
FALCONS, 28-22
No. 25 Detroit (minus 3 1-2) at No. 31 Washington
Can’t see Detroit favored over anyone as road team. But can’t see Washington winning anywhere, either.
LIONS, 15-13
No. 21 Jacksonville (plus 3) at No. 18 Tennessee
In case you haven’t noticed, Titans are in playoff chase.
TITANS, 20-16
___
2019 RECORD:
Last Week: 7-7 against spread, 10-4 straight up.
Season Totals: 85-75-1 against spread, 99-60-1 straight up.
Best Bet: 9-2 against spread, 9-2 straight up.
Upset special: 6-5 against spread, 6-5 straight up.
___
More AP NFL: https://apnews.com/NFL and https://twitter.com/AP_NFL