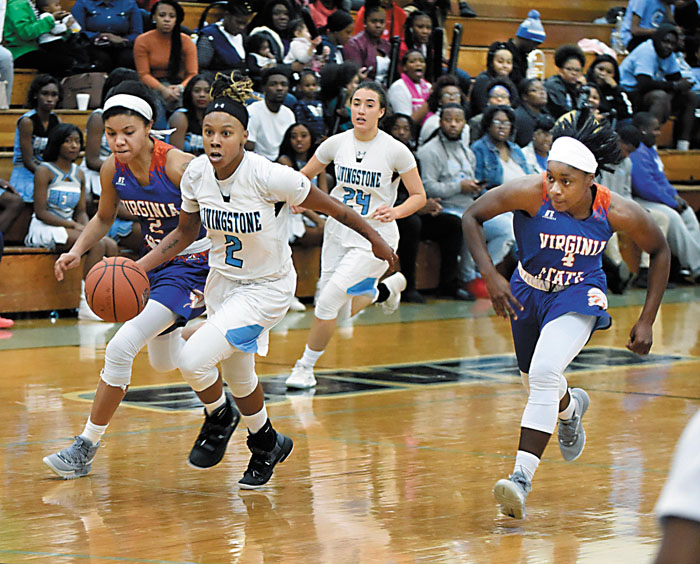 SALISBURY — New Livingstone women’s basketball coach Chiante Wester talks with a quiet confidence. This position is her first as a head coach, but Wester feels that her 13 seasons as an assistant at Virginia State has prepared her for the task at hand.

Wester was key in assisting James Hill and Virginia State to five regular-season first-place finishes in the Southern Division, a 2015 CIAA championship, and four NCAA Tournament appearances. While Wester was on the VSU staff, the teams won over 200 games.

“I feel that I’m still the same,” said Wester, who has seen her first Livingstone team begin 1-1. “As an assistant under Coach Hill, that experience prepared me well. I feel great about things. I’m happy where I’m at and looking forward to having a great first season here.”

Besides experience, something else that helps a new coach: Good players.

Wester inherits some key components from former coach Tiffany Silver’s tenure, including All-CIAA performer Daisa Harris, a 5-7 senior guard. Last year as a junior transfer, Harris averaged 21.3 points (617 points), and led the team in assists (139) and steals (76). She also average 36 minutes per game and, at times, was unstoppable for opposing defenses.

Harris is off and running again, scoring 43 points in the Blue Bears’ first two games this season, a win over West Virginia State (106-95) and a loss to Notre Dame College of Ohio (88-77).

“Daisa is improving on her decision making,” said Wester. “We watched her film from last year, and her shot selection and decision making was, sometimes, not the best. Now, she’s working to get a better shot if she makes one more pass.”

Two other senior guards, Darra Walker and Adel Allen, were big scorers for the Blue Bears last year and are also off to good starts.

Walker, from Chambersburg, Pa., averaged 13.1 last season and shot 33 percent from behind the arc. Allen, from Washington, D.C., averaged 10 points and was second to Harris in assists.

Both Walker and Allen scored 21 each in the win over West Virginia State last week, and Walker followed with 21 more against Notre Dame. Allen had 18 points in the second game, but Wester said she was playing with a sore ankle.

Still another senior guard, Asia Green, will join the team in December, after exams. She averaged 9.9 points per game last season and plays tenacious defense. Green is lightning-quick and was second to Harris in steals with 56.

“Asia will be a key add next month,” added Wester. “It’ll definitely be a plus with the system we run. We can play defense like we want with Asia on the floor.”

Wester brought in Georgia Campbell, a 6-2 senior transfer from Morehead State, for starters. Then the new coach landed 6-4 post Jada Richardson, a freshman from Virginia Beach.

Another freshman had a little longer trip to Salisbury. Varvara Papakonstantinou, a 5-9 wing, is from Athens, Greece.

Obviously, nicknames have taken over for Papakonstantinou. “We call her ‘Papa’ or ‘VP,'” said Wester. “She’s a freshman, but coming from Greece, she has some good experience. Once she gets some games under her belt, she’ll be a big plus for us. She defends well.”

Richardson subs for Campbell, who struggled some in the first two games.

“Georgia fouled out of the first two games,” explained Wester. “She did well while she was in there (13 points, 9 rebounds against Notre Dame), but she’s getting adjusted to Division II. She had been used to the more aggressive style of play in Division I and fouls are called differently. But she’ll get it.”

Two other newcomers are Daijah Turner, a junior transfer from Tallahassee, Fla., and Cassandra Bennett, a 6-5 freshman from Wadesboro.

As far as the first two games go, Wester was, for the most part, pleased with her team’s efforts. “It was good,” she said. “I think we can score the ball. I want our team to push the ball up the floor and score in transition. But we need to focus more on our defense. We fouled too much in the game we lost.

“The biggest thing is keeping them healthy and keeping them focused and engaged, but I think we’ll do fine,” concluded Wester. The discipline is there. We just have to focus on the fundamentals.”

NOTES: Wester is also a former student-athlete in the CIAA, having played basketball at Shaw for two seasons, before graduating in 2003.

The Blue Bears return to action tonight, their first CIAA game, at Virginia Union, the defending conference champions. Livingstone will have to contend with VUU junior guard Shareka McNeill, the CIAA’s Player of the Year last year. She also tied a CIAA Tournament record in February, scoring 59 points against Livingstone in a 91-57 quarterfinal victory.