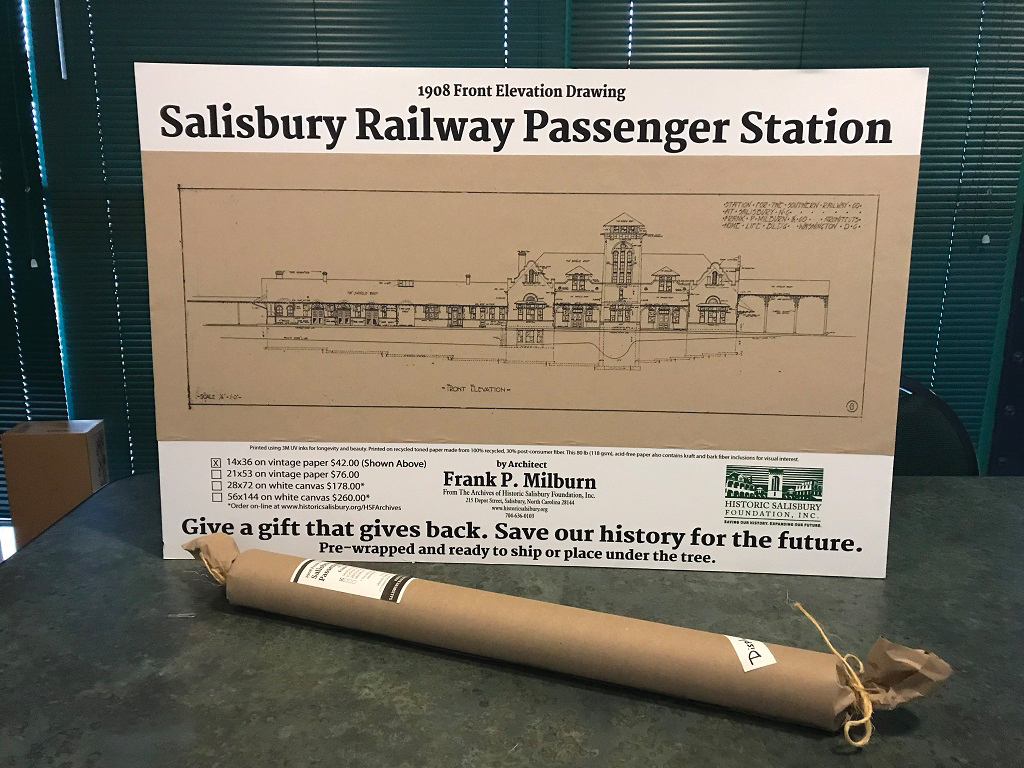 SALISBURY — During last month’s OctoberTour, visitors to Michael and Diane Young’s home on East Innes Street inquired about a piece of art: a blueprint drawing of the Salisbury Depot.

The Youngs went to the Historic Salisbury Foundation and said they thought the original blueprint of the train station was in the foundation’s archives.

With some tweaks, the foundation has printed the original 1908 front elevation drawing of the Salisbury Railway Passenger Station on poster-size paper and in high quality. The blueprint was done by architect Frank P Milburn.

Starting today, the prints will be for sale in two sizes — 14 by 36 inches for $42 or 21 by 53 inches for $76 — at the Hive, Waterworks and the foundation office. Prints are also available online to be shipped and can be printed in a custom size. Foundation members will get a 20% discount.

The print fundraiser is a first for the foundation. Stewart said the proceeds will go to project costs, including restoration of the McCanless House on South Main Street, and operating expenses, including maintenance of the Depot.

The blueprint will only be on sale during the holidays.

“You can target a lot of different enthusiasts, whether you are an architecture enthusiast, a history buff or you like trains,” Stewart said. “I think we targeted a lot of different people. It’s unique. It’s limited time. This is not going to be available forever. Once Christmas comes, we’re not selling this print anymore.”

The Depot was a model station for the Southeast because of its architecture, Stewart said.

“There really isn’t anything that I noticed that looks all that different,” Stewart said. “The extent of which HSF went to make sure it was accurately restored is definitely shown through this print.”