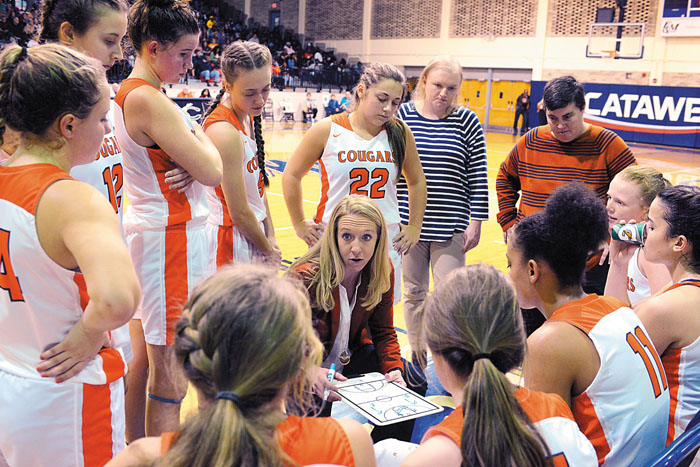 Playoffs: Lost 4th round to Freedom

CHINA GROVE — Any way you measure it, Carson had one of the best teams in 3A last season.

Carson arguably had one of the state’s best before Carleigh Perry went down in January with her second torn ACL in two seasons.

Perry’s health will be a key to this season. She’s made her second remarkable recovery from surgery, smiled a lot, stayed in one piece and was a driving force in Carson’s fantastic tennis season.

She’s not overly tall at 5-foot-9, but if she can stay healthy, guard-heavy Carson, which will be very small, has an inside presence, can compete on the boards and has a chance to defend its NPC and Christmas tournament championships.

“Carleigh is a junior, but she hasn’t had a full season yet,” Carson coach Brooke Stouder said. “You have to love her game. She brings so much grit and so much aggressiveness and so much toughness. She plays so hard.”

If she can avoid any more physical trauma, Perry should be one of the county’s top players, a double-double waiting to happen.

The first thing people think about with Carson is 3-pointers, and it’s true that the Cougars do have an impressive array of shooters.

But the key to who they are is defense. They allowed a meager 38 points per game last season and outscored opponents by 24 on an average night.

Defense is where they’ll really miss McKenzie Gadson, who is starting as a freshman at Anderson. She was long and swift, and the first obstacle in the Cougars’ press. Carson probably can replace the team-highs of 14.3 points per game and 6.3 rebounds that Gadson provided, but her defense was harder to measure.

“McKenzie’s defense got us a lot of easy baskets, not just for her, but for teammates,” Stouder said. “So it’s a huge loss. One of the big keys to our season, along with battling for rebounds, is going to be finding a way to continue to get those easy baskets.”

Offensively, Carson can shoot the ball about as well as any of the county’s boys teams. Colbie Perry, Carleigh’s first cousin, made 85 3-pointers as a sophomore. That’s about three per game. She made 34 percent on long ones, which produces more points than shooting 50 percent from 2-point range. Carson’s other snipers — Maci Cooper (55 3-pointers), Ellie Wilhelm (44) and Taylor Conrad (26) — didn’t take as many, but shot even higher percentages than Perry did. Conrad doesn’t shoot all that often, but she was an awesome 46 percent on 3-pointers.

Cooper made way more than her share of key shots.

Collectively, that’s a foursome that can give Carson 40 or so points every night.

None of those four are one-trick ponies. Perry has long arms and gets steals and deflections. Cooper, is tiny, but she’s a tenacious defender. Wilhelm is a solid ball-handler and a surprising rebounder. So is Conrad, who has to be the world’s feistiest homecoming queen. With Carson playing so many guards, Wilhelm and Conrad,  both 5-6, have to rebound against people who are taller and can bounce higher.

“They’re good at boxing out defensively,” Stouder said. “We’ve also got to get some points off offensive rebounds.”

The Isley sisters, and there are three of them on the varsity now, are going to be really important.

Lani, the oldest of the sisters, is a junior. She’s not a shooter, but she’s an excellent ball-handler, passer, decision-maker and defender and helps Carson do what it does as well as it does. She handles the ball against pressure. She gets the ball to the shooter with the hot hand. She led Carson last season in assists and steals.

“We’re at our best when Lani is pushing the ball and we’re running, placing at a fast tempo,” Stouder said.

Hannah Isley, who came up to the varsity to stay after Carleigh Perry was injured, made an impact. She can score. In Carson’s season-ending loss to Freedom, when most of the Cougars were struggling, she had 16 points. She also had a big off-season and might be the team’s most improved player. The plan is for her to have an expanded role as a sophomore.

Hannah’s twin sister, Riley, is also going to be on the varsity this season. She’s a fine athlete. She’ll help.

Victoria Post, a senior, is another girl who can shoot. How big a role she’ll have is hard to say, but she had a couple of double-figure games last season and probably would be a starter at a lot of schools.

Rounding out the 10-girl varsity roster is senior Krystal Sanns, who was a jayvee player, and then a manager, and now has earned a spot on the varsity team.

“We’re going to be small — and I mean really, really small,” Stouder said. “But that’s kind of who we’ve been for a while. We’re comfortable with it. We don’t have size, but these girls have known each other a long time, they’ve played in a lot of big games together, and they like each other. We can shoot it. I think we’ll get after it on defense, and hopefully, we’ll get some rebounds.”

Stouder, who had a famously rocky start to her head-coaching career (4-67 in Carson’s early days), stuck with it. She should get her 200th career win around Christmas. At that point, she would be No. 2 all-time for Rowan girls, behind only Salisbury-Rowan Hall of Famer Jesse Watson, who did amazing things at East Rowan.

Carson might be a little behind where it usually is early on because of the school-record seasons enjoyed by the cross country and tennis teams. Carson has  a ton of female multi-sport athletes who were involved in those sports before joining the basketball team. Cooper, a tennis standout, suffered a high ankle sprain an an early basketball practice and missed two weeks.

Carson has some good players on the jayvee team. They could be called up if anyone goes down.

Lu Gamewell again will coach the jayvees. Stouder will be assisted again by Dee Miller and Chloe Monroe, while recent Carson player Destiny Jackson has joined the staff.