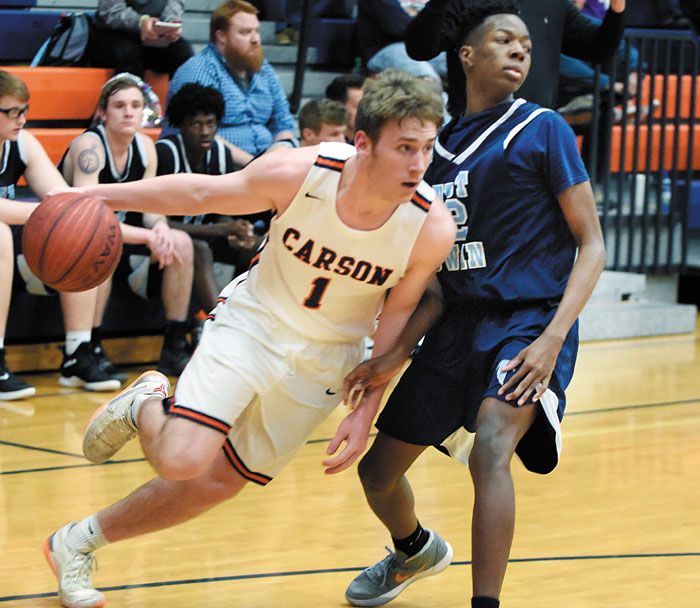 CHINA GROVE —  Veteran coach Brian Perry, the only head coach Carson’s boys have ever had, steered a 2019-20 club that was supposed to be a disaster of epic proportions to 13 wins and third place in the North Piedmont Conference. People were talking 0-25 in the preseason.

All things considered, it may have been Perry’s best coaching effort. Carson had graduated four standout seniors, and his only returning starter began the season on the sidelines after ACL surgery. No one had any idea what Carson had  when last season got under way.

“We were just running around out there for a while,” Perry said. “But guys got used to playing with one another. We settled down.”

The Cougars were a strange mix of guys from several schools. But as the season unfolded, as Cole Perry, the coach’s nephew made his successful comeback from the ACL surgery, it was clear Carson wasn’t bad. The Cougars came very close to making the playoffs. They were 69th in the final MaxPreps rankings for 3A. Enka, 67th, did get in, so Carson was right there.

As disappointing as missing out on the playoffs was, Carson laid the groundwork for a potentially better season.

“Well, we’re definitely more experienced now than we were at the start of last year,” Perry said. “We know who we are. We know we’ve got some good players.”

Carson unveiled three players last year who were among the county’s top 15. All three figure to be significantly better this season, with another year of physical maturity and experience.

Start with 6-foot-4 senior Eric “EJ” Clark, who was the county’s most eye-popping surprise a year ago. He missed his freshman season with a hip injury, so he played jayvee as a sophomore. But he topped 20 points seven times last season when he got his first chance on varsity, including 31 when Carson enjoyed a major win against South Iredell.

For a guy to come out of nowhere and make second team all-county is just about unheard of, but Clark did it. He averaged 14.3 points per game.

“He kind of exploded on the scene last year,” Perry said. “He can shoot, he can drive, and he can dunk the heck out of it. He’s pretty complete offensively. He had a great summer, and he’s working hard on his defense and rebounding.”

Mauldin, a 6-2 junior, also has things to work on, but he’s already a dangerous fellow with the ball in his hands. He had four games with 20 or more points last season and averaged 12.7. He shoots with impressive range, and he’s grown some since.

“He can light it up when he gets going,” Perry said. “He can score and pass. Like all our guys, he’s putting in a lot of work on defense, and it’s showing.”

Smith, a 6-foot point guard, also has grown some. He probably won’t score as much as Mauldin and Clark, but he’ll get them the ball in spots where they can score. He should finish often enough  himself to average double digits. He averaged 7.5 points last season.

“He almost had a triple-double in our last game of the season,” Perry said. “He was really coming on at the end. He’s pass-first and has a true point guard mentality, but he can score when he needs to and he’s a very strong rebounder for a guard. He’ll start a lot of breaks for us with his ability to pull down a defensive board. When he’s got it, everyone else can just go.”

As far as inside play, Perry is counting on 6-2 Jake Harris and the similarly-sized Chris Allen, who was only available for the first semester last season. The plan is for them to rotate and play similar minutes. They won’t have to score a ton with the perimeter firepower Carson possesses, but the Perry desperately needs them to rebound, get some stick-backs and defend the post without getting in foul trouble.

“I can’t tell you how happy I was when Harris walked in the gym after football,” Perry said. “He’s gotten so much stronger and bigger. He’s been playing above the rim some. And Chris is an energy guy, a vocal guy. He can catch and finish.”

Denis Zuniga, a 5-7 senior guard who has paid dues as a reserve getting limited minutes, will get his first shot at making a major impact. He’ll get a chance to join Smith in the backcourt.

“He won’t score a lot, but he’ll scrap, he’ll be enthusiastic, and he’ll do the little things, like taking charges all over the floor,” Perry said.

Beyond those six, there’s zero varsity experience. A few guys Perry expected to come out, opted not to.

“Everyone talks about how many kids Carson has now, but we had six guys total in our junior and senior classes come out this year for basketball,” Perry said. “Most years I don’t have to cut anybody. I’d trade numbers with most people.”

Carson’s depth is unproven, but at this point last year, no one knew for sure whether or not Clark, Smith and Mauldin could handle varsity.

So Perry is optimistic.

“We’ve got five freshmen and sophomores who are going to complete our varsity roster,” Perry said. “We’ll try to give them jayvee time because I know they’re not 100 percent ready, but at the same time I believe they all can be good players for us. It’s a group that can shoot, and there are some hard-nosed kids in that bunch.”

Maybe one of them is the next E.J. Clark.