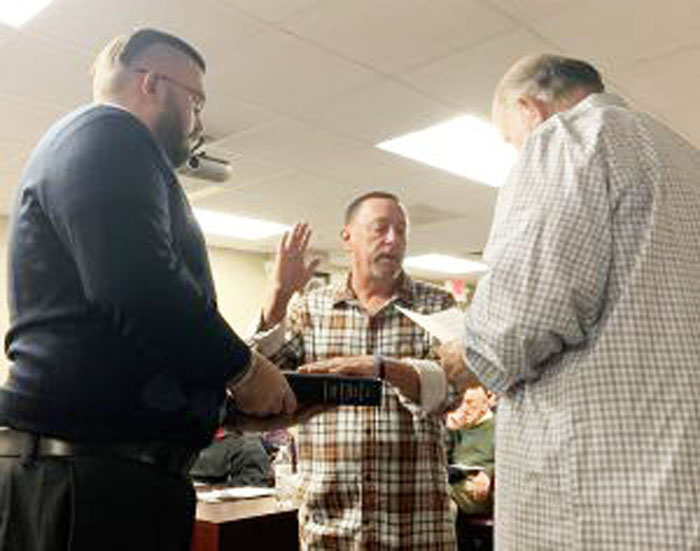 LANDIS — While he didn’t come up with enough votes in this year’s Landis alderman election, Darrell Overcash is now on the board after being appointed to fill the seat left vacant by Bobby Brown’s death.

Brown, who died Sunday, had a term set to expire in 2021. Overcash will serve the remainder of that term. In this year’s alderman race, Overcash finished third among five candidates, including write-in Shirley Martin.

The board voted 3-1 to appoint Overcash, with Alderman Seth Moore voting “no.”

Overcash thanked the board for the appointment and the public for its participation at meetings. Overcash said he looks forward to working with incoming Mayor Meredith Smith as well as board members Tony Corriher, Ashley Stewart and Katie Sells.

“We’ve had a bad year. It’s time to put it behind us,” Overcash said. “I’m new. We’ve got three new ones coming on — Meredith, Katie, Ashley. … I hope we can all work together, get along and move this town forward.”

The newly elected board members will be sworn in at the Dec. 9 meeting.

In his four years, Moore said, he tried to take Overcash’s advice when residents were talking about him and shake it off.

Brown was not forgotten as Overcash sat in his former seat.

Town Manager Roger Hosey announced that Town Hall would be closed at 11 a.m. Friday so the staff could attend Brown’s funeral.

“Bobby’s seat may be filled, but his shoes never will be,” Hosey said.

Mahaley also thanked residents of Landis for allowing him to serve as mayor.

Mayor Pro Tem Tommy Garver said he looks forward to stepping down from the Board of Aldermen to spend more time at his Myrtle Beach home.

Moore thanked his fellow aldermen for serving with him and said he loves the town.

“I’m going to miss it but at the same time, I’m glad that it’s over,” Moore said. “It’s been a long four years, especially the last year. It’s been a heck of a year.”

Corriher addressed a rumor that he and Brown plan to resign at the December meeting and said neither of them had any intentions of doing that.

When adjourning the meeting, Mahaley joked, “I make a motion to resign,” and immediately burst out laughing. He then made a proper motion to adjourn.

• The board approved a voluntary annexation of Haskell’s Hardware, at 2908 Kirk Ave. The business plans to use the parcel for a parking lot.