LANDIS — A North Carolina flag was draped on Alderman Bobby Brown’s seat at the Landis Board of Aldermen meeting Monday night, and on the desk was a bouquet of flowers.

Brown, who was 65, died Sunday night.

And the board held a short meeting and recessed until 7 p.m. Wednesday to honor him.

Mayor Mike Mahaley said Brown was his neighbor for his whole life. Mahaley called Brown a gentle and honest man who loved Landis. 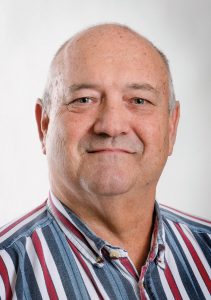 “Bobby was a kind man, a good alderman and I can honestly tell you he loved this town,” Mahaley said.

Mahaley said he watched Brown grow up with his two siblings. Brown was almost like family to Mahaley, and they had a special connection.

Alderman Tony Corriher remembered his days serving with the Landis Fire Department with Brown. Corriher was the fastest driver, and Brown was the second-fastest. Corriher said he and Brown would often have breakfast together, and he had seen his health was declining.

“Bobby was a good friend,” Corriher said. “He was a better man than me. He never talked about nobody. He never named nobody bad. I never heard him say a curse word. He was a good man, and I’m going to miss him real bad.”

Assistant Town Manager Brandon Linn said Brown and he often joked about the alderman adopting him as his son. Linn described him as a “pillar in the community” and someone who had a passion for the town that did not go unnoticed.

“His legacy will live on,” Linn said. “Unfortunately, it just happened too soon.”

Town Manager Roger Hosey said Brown was more than just a board member but a friend to many in town.

“Bobby was one of the most authentic and unpretentious, genuinely nice people I have ever met in my life,” Hosey said. “He will be sorely missed, not only on this board but in this town.”

Alderman Seth Moore said, though he only served with Brown for two years and didn’t know him well, Brown treated everyone with kindness even if he agreed with him or not. He said Brown was a great public servant through and through.

Brown was a retired sergeant with the North Carolina Department of Corrections. He was also a former deputy with the Rowan County Sheriff’s Office. He was in his fourth term as a Landis alderman, serving in the late 1980s, early 1990s and now. His term expires in 2021.

Brown’s goal was to become Landis mayor, but he led an unsuccessful campaign this year. His father was previously mayor.

Mayor Pro Tem Tommy Garver said he credits Brown with pushing to start a road paving project that has resulted in eight streets being repaved in the past two years.

The board had Pastor David Franks, of First Reformed Church in Landis, recite “The Lord is My Shepherd” as the aldermen, town staff members and other residents joined in. Franks led a prayer on the passing of Brown.

“Bobby lived and worked in this town for many years as Mike has shared. He truly loved it and his service and the way he turned his passion into years of service on this board and in the community,” Franks said. “He spent many hours serving the community and her citizens, and for that we’re grateful.”

Mahaley led a moment of silence to remember Brown.

Brown is survived by a son, a sister and a grandchild.