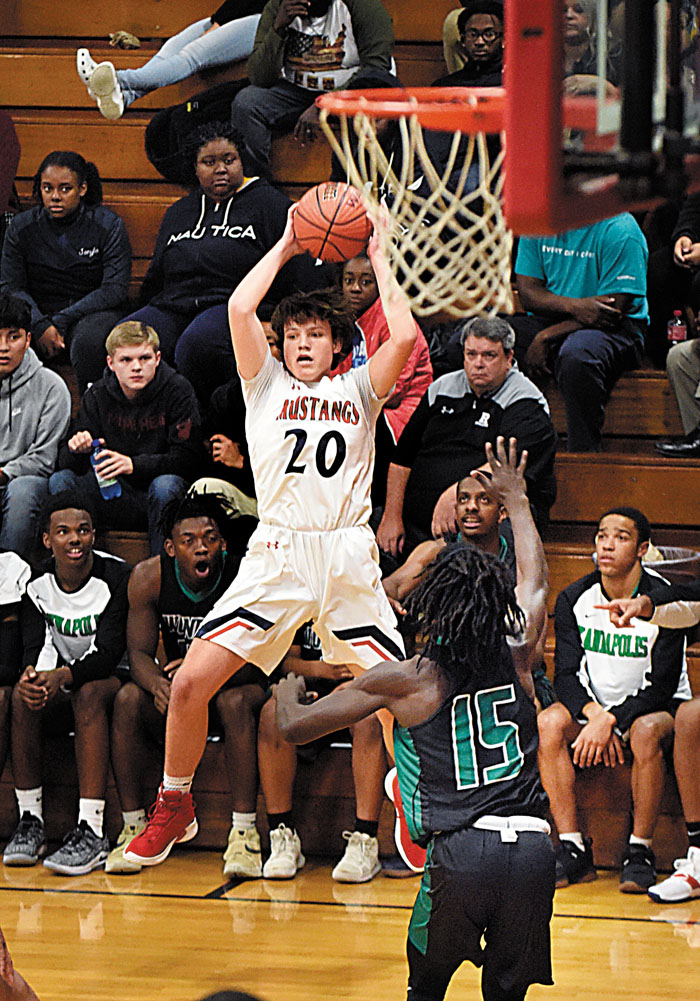 His assistant, Justin Vanderford, played in that same golden era for coach Greg McKenzie, and is the leading scorer in East history.

East’s enrollment in 2005, prior to the opening of Carson, was 1,441 students. East is down 500 students from its peak, with 939 students the latest ADM figure provided by the NCHSAA.

The last time East was a serious competitor for a conference championship was in 2008.

East won 10 games last season, and by recent standards, that was a pretty strong showing. It was the most victories since the 2011-12 team went 13-12.

East has a 3A team on the non-conference schedule this season (Cox Mill) that has more than twice as many students. Fellow NPC member South Iredell has 700 more students.

East, obviously, will be downsizing to the 2A classification in the near future. Until then (2021-22), the Mustangs will continue to spar in what has become a somewhat uneven fight.

“We do feel like we have a good chance to compete in the North Piedmont Conference,” Misenheimer said. “Before that, when we were in the South Piedmont with those Cabarrus schools, we were being put through a grinder. Every night, you were trying to cope with someone like Wendell Moore, Leaky Black or Lavar Batts.”

Misenheimer is optimistic about this season, although the Mustangs are going to look a lot different. They’ll be much smaller without Brandon Jefferson, Elton Hooper and Gabe Hinceman. Hooper and Hinceman were the top two scorers. Hooper was the leading rebounder.

“We don’t have anyone this year who can get 15 rebounds like Elton did,” Misenheimer said. “We’re going to have to battle on the boards as team, with a lot of guys getting four, five or six rebounds. Rebounding is going to be key.”

East’s strength figures to be on the perimeter, where it has four guards with considerable varsity experience — Gavin Sprinkle, David Jordan, Landon Shuping and Sammy Pinckney.

“We’ll have the best-shooting team we’ve had since I’ve been coaching,” Misenheimer said. “In recent years, we’ve been pretty good defensively, but we haven’t always been able to score.”

The Mustangs haven’t averaged more than 55 points per game since 2009. They still managed to win a lot of close games early last season and were 8-6 at one point, but they suffered through a five-game losing streak late in the season.

Shuping is a true point guard. He’s worked hard to improve his shooting and defense in the off-season. Misenheimer is looking for him to average six assists.

The 6-2 Jordan and 6-foot Sprinkle have shown flashes of being special and have scored in bunches.

Sprinkle had a 26-point game against South Iredell and put in 27 against Statesville. He averaged 8.6 per game. He shot a terrific 44.4 percent on 3-pointers last season, so the job for his teammates is to help him get open.

Jordan (7.5 ppg.) has been on the varsity since he was a freshman. He scored in double figures eight times last season.

“He’s a great athlete, quick, with an outstanding vertical jump,” Misenheimer said. “He’s someone who can get 16 to 18 points quietly, without taking a lot of shots. He can score in a lot of ways.”

Pinckney, the Mustangs’ star running back on the gridiron, brings some quickness and grit.

“He’ll be undersized, but he can play inside,” Misenheimer said. “He’s really strong and really tough, and he’ll be a defensive stopper. He can do the things Christian Bennett did in that role last year.”

“He can shoot and he’s a really savvy player for someone his age,” Misenheimer said. “He understands the game.”

East has added excellent athletes to the mix in juniors Vincent Jones and  Tahj Jones. They’ve proven themselves on the football field.

Cameron Padgett and Jake Hunter are better known for throwing and hitting baseballs, but they’re going to be important players. They are 6-foot-4 forwards who can shoot, making them tough match-ups for opposing big men.

Hunter, a junior who is an East Carolina baseball commit, decided to come out and has been the biggest surprise. Padgett, a sophomore, was a contributor as a varsity freshman last season.

Connor Wilson, a returner who played limited minutes, and Thomas Miller, a new face, will round out the 11-man squad.

If East can grab its share of rebounds, it should be OK. The Mustangs will make a lot of 3-pointers. Misenheimer says they’re coachable, hard-working and get along well.

A lot of times, that’s half the battle.

As far as the NPC, Statesville, always athletic, is probably the team to beat. Misenheimer hopes his team will be in that cluster of teams pushing the Greyhounds.

East gets started tonight with a non-conference game at Central Davidson, a 2A school that has about 50 more students than East.