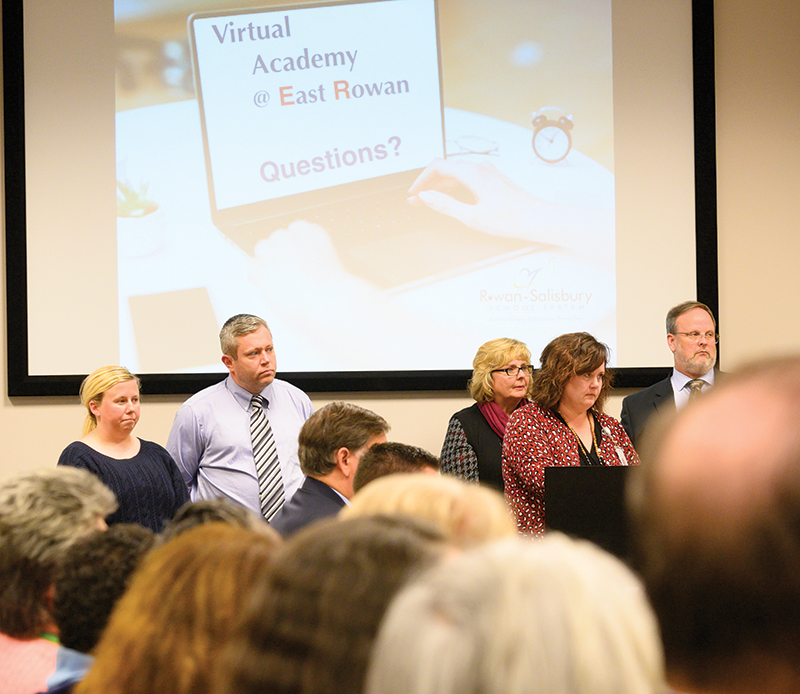 Josh Bergeron / Salisbury Post - Rowan-Salisbury Schools staff present a proposal for the Virtual Academy at East Rowan to the school board in November. The proposal would offer three options for taking classes, including an online-only diploma.

SALISBURY — To give students flexibility en route to graduation, East Rowan High School hopes to start a virtual academy next year that would offer online-only diplomas.

As part of Rowan-Salisbury Schools’ renewal status, schools in the district have created plans to take advantage of curriculum, budget, personnel and calendar flexibility. And East Rowan High is planning to implement its virtual academy for the 2020-21 school year.

Principal Tonya German told the school board Monday night that the school hopes the virtual academy will entice home-schoolers to take some classes with Rowan-Salisbury Schools, that existing students taking online classes elsewhere would opt to do it with their public school system. and that the option would keep the school system up-to-date with 21st-century learning habits.

The virtual academy would run in conjunction with the school’s existing business and information technology academy.

But as part of the Virtual Academy at East Rowan, as it’s formally named, students could receive an online diploma, a blended diploma and/or take online classes as desired.

As proposed Monday, the online diploma would require no mandatory “seat time.” Students also would not have access to clubs or athletics. In her presentation, German said members of the school’s faculty believe more than 50 classes can be taught online — from basics such as English and American history to health and business law.

“It would be teacher-facilitated and -directed,” German said. “It would not be delivered through a canned program. … It would be the same, if not higher, quality of classes as they’re receiving elsewhere online.”

The blended diploma would also be for students who want to earn an online diploma, but students would be required to spend at least five hours at East Rowan per week. There would be mandatory class meetings and field experiences, too. Students in the blended diploma program would have full access to clubs and athletics.

German said there would be at least one class outing per quarter and class meetings at least once per month in the blended program.

Meanwhile, an option called “RSS Choice” would be for traditional students who take some online classes.

If approved, the Virtual Academy at East Rowan would launch in August 2020.

But German and East Rowan staff faced a range of questions from members of the school board Tuesday, including the districtwide implications of the plan.

Board member Travis Allen asked how many classes a home-schooler would need to take for RSS to count the person as a public school student. German said a student would need to spend 50% of his or her day with Rowan-Salisbury Schools.

“We have a large home-school population. So, maybe this helps get some of our students back,” Allen said.

The estimated number of home-school enrollees in Rowan County has increased to 2,671 from 1,550 10 years ago as Rowan-Salisbury Schools enrollment has slowly declined.

Allen also asked about how students at other high schools in Rowan County might try to use the virtual academy to switch schools and join East Rowan’s sports teams.

Those questions were met by statements from board member Jean Kennedy, who said Monday’s discussion was about districtwide matters when German’s proposal is applicable to East Rowan High School.

“We can just move them into a seated section,” Mitchell said.

If students are more than a week behind in online courses, they would automatically be brought in for a meeting, said East Rowan literacy coach Jodie Lohmeyer.

Allen said he would be willing to approve the proposal if the school’s staff returns with more details about how students in the virtual academy could participate in athletics and how staff would handle student transfers from high schools elsewhere in the district. And the board voted to ask East Rowan staff to return with those details in December.

Rowan-Salisbury school board pauses Overton closure as it hears…