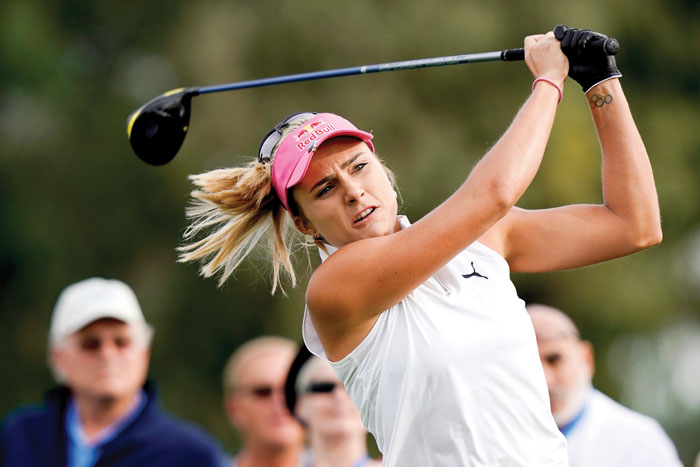 FILE - In this Thursday, April 4, 2019 file photo, Lexi Thompson hits her tee shot on the second hole during the first round of the LPGA Tour ANA Inspiration golf tournament at Mission Hills Country Club in Rancho Mirage, Calif. Thompson has gone five years since her only major title. (AP Photo/Chris Carlson, File)

By DOUG FERGUSON AP Golf Writer
NAPLES, Fla. (AP) — One of the rookies on the LPGA Tour next year was asked which player she admired when she started getting serious about golf.
She mentioned Lexi Thompson.
“It kind of makes me feel old. I’m 24,” Thompson said when told this, her smile a mixture of disbelief and pride. “For somebody to say I was a role model, that’s awesome.”
This wasn’t her best year on the LPGA Tour, with only one victory. That came one week after Thompson began the final round of the U.S. Women’s Open one shot out of the lead, started with three bogeys in four holes and never caught up.
But that victory at the ShopRite Classic was memorable because Thompson hit pitching wedge from 192 yards on the par-5 closing hole to 20 feet and made eagle. Power is appealing.
And it was meaningful, because it extended her remarkable run of at least one victory in each of the last seven years, the longest active streak on the LPGA Tour.
This also made her feel old.
“It’s pretty crazy to think that I’ve been out for so long and I’m only 24 years old,” Thompson said. “It’s been a great road, journey for me.”
The question is whether she feels 24 or someone closing in on a decade of golf at the elite level.
Thompson, with 11 LPGA victories, returns to CME Globe Tour Championship as the defending champion, blowing away the field by four shots. Her brother was on the bag and she had family who drove over from the other side of Florida. Those were happy times.
But it has not been without plenty of bumps along the way.
She took an extended break from golf last year to try to become more emotionally whole. She took to social media earlier this year to announce that she was getting off social media, bothered by an endless stream of negativity from people hiding behind handles.
And there is the relentless temptation to meet expectations that inevitably follow a player who was powerful and polished before she could drive a car.
“This year, I learned the most about how I need to be emotionally,” Thompson said. “On and off the golf course, I’m trying to be happier, be myself, not putting up a front, just trying to enjoy life more. I think that’s helped me out more on the course, especially recently.”
Her best golf was in the summer, when she won and was runner-up three times during a rare five-week stretch. But when you’ve been that good for that long, it’s easy to follow a narrative of negativity.
Should she be winning more?
Has it really been five years since she won her only major at Rancho Mirage and took a joyous leap into the pond?
Remember, she was 12 when she qualified for the U.S. Women’s Open in 2007. She was 15 when she finished runner-up at the Evian Championship. She was 19 when she won her first major at the Kraft Nabisco.
There was always the urge to feel like she’s playing for others.
“I’ve gotten to that point at some parts of my career, just a lot of expectations and feeling like I have to perform for others,” she said. “But now I know I’m putting in the hard work. I’m going out and trying to win. But it’s not going to happen every time. I’m not a robot. I’m human. This is my life, and I’ve put in a lot of work, and that’s what people need to realize.”
The challenge in golf is not one’s age or experience, but rather how young everyone else is getting.
Thompson’s best chance to reach No. 1 in the world was at the Tour Championship two years ago, when she stood over a 2-foot par putt on the 18th hole that would’ve won the tournament and made her player of the year and rise to the top of the world ranking. She missed, and Ariya Jutanugarn won the tournament.
Thompson, who has played only twice since going 0-2-2 in the Solheim Cup in September, is now at No. 9. She no longer is even the highest-ranked American. That distinction goes to 21-year-old Nelly Korda, who has won three times in the last 13 months.
Thompson spent her recent break working on changes to her swing, an evolving process that she figures will last as long as she plays for a living. She looks at this as a good year — a victory, three runner-up finishes, No. 6 on the money list, among the leaders in driving distance and greens in regulation.
Her lesson going forward is to be happy with what she has done and to not be as obsessed with what she hasn’t.
“The more pressure you put on yourself and listen to the outside on expectations and what you should be achieving, it’s just going to tear you down,” she said. “Then if you focus on that, you can’t perform to your highest.”
She knows this from experience, even at 24.