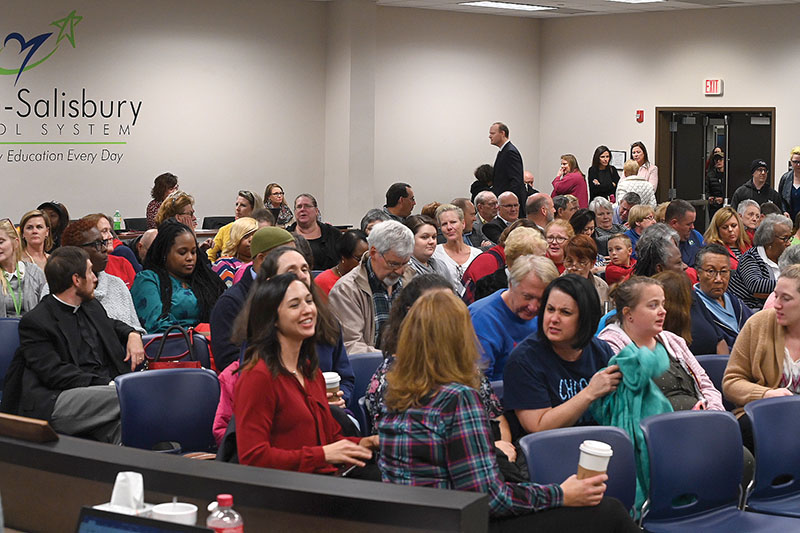 Recalling the motto for downtown’s Bell Tower Green Park during Monday’s Rowan-Salisbury Board of Education meeting, Heggins suggested the creation of a new phrase — “let’s build a school,” and a K-8 school at that.

She was one of more than two dozen speakers and a few hundred people who attended Monday’s meeting to encourage the board to revisit construction of a K-8 school instead of demolishing Overton Elementary as part of a plan to renovate Knox Middle.

The renovation plan, at a cost of $26 million, would relocate Knox students to Overton Elementary temporarily, disperse Overton students to nearby schools and permanently close the elementary school once renovations are complete. The plan would require the addition of five mobile classrooms because of Overton’s smaller size.

It would also be a decision that goes against the desires of a broad cross-section of people, including pastors, parents, grandparents and Salisbury’s mayor, who said that sometimes public officials need to “lead with their heart.”

“Before we get caught up in the brick and mortar, let’s not forget about the flesh and the bone and the spirit,” Heggins said to loud applause.

The school board was scheduled Monday to discuss a plan to close Overton Elementary School, which would have shifted its students to Dole, Hurley, Isenberg, Koontz or North Rowan elementary schools based on where they live. But that discussion was shelved at the start of the meeting.

Board Chairman Josh Wagner said the system had not received a $10 million state grant to help pay for construction of a South Rowan Elementary School, which would shift the entire financial burden to the school board and, in turn, county government. Wagner said RSS needs to have more detailed discussions about its capital needs across the district and how it wants to pay for them.

Near the end of Monday’s meeting and after the crowd left, board member Kevin Jones asked, “What’s next?” about the Knox-Overton discussion. Wagner said the matter could be considered as soon as the board’s December meeting but that more information needs to be collected.

After the meeting, Wagner clarified “more information” could involve more detailed financial information for South Rowan Elementary School. Wagner said he hopes talk about whether to close Overton would continue in December, but he told the Post to “wait and see what’s on the agenda.”

While closure was pulled from Monday’s agenda, Wagner still encouraged attendees interested to speak about Knox renovations and/or Overton’s closure. Speakers raised concerns about racial and economic inequity, decades of failing to invest in Knox while building schools elsewhere and not considering what’s best for students.

The first to speak Monday night, Rev. Robert Black, rector of St. Luke’s Episcopal Church, said closing Overton exacerbates questions about the quality of schools, is more like regression than “renewal” and would be an example of systemic racism.

“The county motto is ‘be an original,’ but there’s nothing original about closing majority-minority schools,” Black said.

Hugo Carrera, a parent, said the board needs to make sure public opinion is accounted for.

Pam Bloom, a former educator, recalled a motto from the merger of Salisbury city and Rowan County schools when saying that kids at Knox and Overton “are worth it.” Building a K-8 school, estimated to cost more than $50 million, shouldn’t be viewed as a fiscal burden, she said.

“We’re not talking about what’s in your hearts,” Smith said. “We’re talking about the decades-long history of systemic racism that goes all the way back in history. … What we know is that the impact of this history can never be wished away. It has to be consciously and intentionally dismantled by policy, process and procedures at the board, district and county level. ”

Mary Frances Edens, a former principal of Overton, said the Knox-Overton property is “an ideal location” for a school because it’s on a dead-end road, adjacent to the Salisbury Greenway and Catawba Nature Preserve, and in a safe neighborhood. She specifically recommended the school system build the K-8 school on the football field between Knox and Overton.

Chris Sharpe, speaking on behalf of the Salisbury-Rowan NAACP, said the organization is concerned about the proposed Overton closure. Sharpe questioned how students, particularly those with special needs, would adapt to moving to a new school.

And Corey Hill, a parent, said the plea to not demolish Overton isn’t simply about tearing down a school.

“We’re asking you not to tear down our community,” Hill said.

Ask Us: Are vendors at festivals inspected for food…