KANNAPOLIS — Deputy Police Chief Terry Clanton is retiring after working for the Kannapolis Police Department for 36 years. He will continue his career in law enforcement as director of law enforcement training at Guilford Technical Community College.

A native of Cabarrus and Rowan counties, Clanton says he always wanted to be a police officer.

“As a child, we would watch television shows and movies like ‘Adam 12, and I wanted to be just like those police officers. I wanted the excitement of the job and to make a difference in my community,” he said. 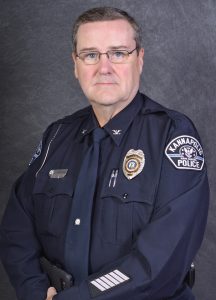 His parents wanted him to be a teacher but after a year in college, he convinced them that law enforcement was the right choice for him. They were supportive after that.

“My parents and my wife, Eva, of 33 years, are the reason I have been able to have the freedom of a career in policing.”

Clanton was hired in 1984 at age 21. He was given a hand-me-down .38 revolver with wooden screws, a hand-me-down uniform and a used Mercury Zephyr. At that time, the Kannapolis Police Department was part of the Cabarrus County Sheriff’s Office because the city was not incorporated yet.

Since that time, policies and procedures were put in place and equipment and technology acquired to help officers do their jobs better.

Over the years, Clanton has worked in patrol, investigations, staff services and support services as he was promoted up the ranks. He says his favorite time was in the investigations unit.

“I was serving in a supervisory role, but I was also involved in everything happening with our cases and helping the people who were involved in the incidents,” he said.

“The cases that stick with me the most vary, between those where we have been able to really help someone, while others have been the senseless violence that has negatively impacted our residents,” he said.

“I am most proud of the fact that we have great citizens. The people of Kannapolis are good people. Sure, we have some criminals. Every city does. But the overall mindset of our citizens is that we do not want crime here and we are not going to tolerate it. People here help us solve crimes. We see that every day in every neighborhood.”

“I am also proud of our department. We are a team and a family. When I first started, there were 48 people in the department. Now we have over 100. We are more diverse with our officers coming from different backgrounds and cultures – just like our growing population. We are well trained with the best equipment a department can have. …

“Although the department and the city have grown, the mindset of the department is the same. We are here to help people. Our motivation is to make a difference in our community,” Clanton said.

Police Chief Woody Chavis, who has worked with Clanton during his entire career, said Clanton is dedicated, loyal and a true professional.

“His contributions to this agency and the profession were huge and unmatched.
Chavis said. “He was an integral part of all of the accomplishments that our agency has achieved over the last 36 years. Terry was a true friend and will always be remembered for his commitment to the citizens of our city.”