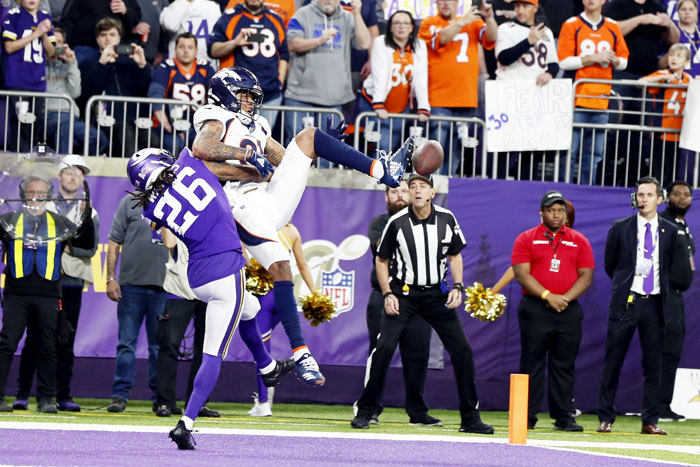 Minnesota Vikings cornerback Trae Waynes (26) breaks up a pass intended for Denver Broncos wide receiver Tim Patrick (81) in the end zone during the second half of an NFL football game, Sunday, Nov. 17, 2019, in Minneapolis. The Vikings won 27-23. (AP Photo/Bruce Kluckhohn)

By the Associated Press
MINNEAPOLIS — The Minnesota Vikings erased a 20-0 halftime deficit with touchdowns on each of their four drives in the second half, fending off the Denver Broncos by forcing three straight incomplete passes in the end zone over the final 10 seconds to preserve a 27-23 victory on Sunday.
This was the first time in five years — a span of 100 games including the playoffs — that an NFL team won after trailing by 20 or more points after two quarters.
Kirk Cousins went 29 for 35 for 319 yards and three scores for the Vikings (8-3), overcoming a system-wide failure in the first half that included a lost fumble of his during a sack that led to one of three field goals by Brandon McManus for the Broncos (3-7).
Cousins hit Stefon Diggs for a 54-yard touchdown pass that brought the crowd noise to a deafening level and cut the lead to 23-20. McManus went wide right from 41 yards on his fourth attempt, and Cousins found Kyle Rudolph wide open for a 32-yard score on the next possession with 6:10 left. Both of those throws by Cousins came off bootleg rollouts to his left, the type of passing play he has long thrived on.
Brandon Allen, the fill-in quarterback after the injury to Joe Flacco and the impending debut of rookie Drew Lock, admirably drove the Broncos to the cusp of a comeback of their own with a drive that included three fourth-down conversions.
With first-and-goal from the 4, but only 10 seconds and no timeouts remaining, Allen had three chances at the winner. Trae Waynes knocked down the first one, Jayron Kearse had a hand on the second one and the last try for Noah Fant sailed past the rookie tight end after he and Kearse tussled for position.

RAVENS 41, TEXANS 7
BALTIMORE — Lamar Jackson threw four touchdown passes, ran for 86 yards and helped Baltimore roll to its sixth straight victory, over Houston.
The game was billed as a matchup between first-place AFC teams and two of the best double-threat quarterbacks in the NFL.
Jackson and the Baltimore defense made it a one-sided affair, and the Ravens (8-2) are riding their longest winning streak since a seven-game run in 2000, their first Super Bowl season.
After throwing three touchdown passes to put Baltimore up 21-0 in the third quarter, Jackson followed with his most impressive play of the day: a 39-yard run in which he broke six tackles, weaving through the Houston secondary as if playing keep-away with the football.
Deshaun Watson, on the other hand, spent the entire afternoon running from a defense that utilized a variety of blitzes and coverages. Baltimore rang up seven sacks — six against Watson — forced two turnovers and limited the nimble-footed quarterback to 12 yards rushing on three carries.
Watson went 18 for 29 for 169 yards with a lost fumble and an interception for the Texans (6-4). Houston fell behind 34-0 before Carlos Hyde ran for a 41-yard touchdown with 7:10 remaining.

PATRIOTS 17, EAGLES 10
PHILADELPHIA — Julian Edelman threw a go-ahead 15-yard touchdown pass to Phillip Dorsett and New England rallied for a victory over Philadelphia.
Tom Brady threw for 216 yards, leading New England (9-1) back from a 10-0 deficit, but it was Edelman, the Patriots’ wide receiver, who found a target in the end zone. The Pats defense sacked Carson Wentz five times and forced one turnover.
Wentz couldn’t get much going without his two best receivers and top running back sidelined by injuries. Nelson Agholor couldn’t make a twisting catch on Wentz’s fourth-down heave into the end zone from the Patriots 26 with just under a minute left.
The Eagles (5-5) got the ball back and advanced to their 42 but Wentz’s desperation pass fell incomplete.
This was nothing like the thrilling matchup between the two teams in Super Bowl 52. Nick Foles led the Eagles to a 41-33 victory over the Patriots to capture the franchise’s first NFL title since 1960. The teams set or tied 29 Super Bowl records, including most yards in any game (1,151) in league history.

49ERS 36, CARDINALS 26
SANTA CLARA, Calif. — Jimmy Garoppolo threw a 25-yard touchdown pass to Jeff Wilson Jr. with 31 seconds left for his fourth TD pass of the game and San Francisco rallied for a victory over Arizona.
Garoppolo connected with Wilson over the middle for the go-ahead score one play after the Niners (9-1) narrowly converted on a third-and-3 pass that went to replay review.
Instead of being ruled short and having to decide whether to kick a tying field goal or go for it on fourth down, San Francisco had a new set of downs and took advantage on Wilson’s first career touchdown catch.
David Johnson fumbled on the next play for the Cardinals (3-7-1), who squandered a 16-0 lead and lost their fourth straight game. San Francisco added a fumble recovery for a touchdown by D.J. Reed on the final play after a botched lateral by Arizona.
This marked the biggest deficit erased by the 49ers in a win since rallying from 20 points down to beat Philadelphia on Oct. 2, 2011. San Francisco also overcame a 17-point deficit in the NFC title game at Atlanta following the 2012 season.
Garoppolo threw for 425 yards and four touchdowns, but also threw two interceptions deep in Arizona territory that nearly doomed the 49ers. The first set up a field goal that put Arizona up 19-17 and the second came with San Francisco trailing by three late in the fourth quarter.

SAINTS 34, BUCCANEERS 17
TAMPA, Fla. — Drew Brees threw for 228 yards and three touchdowns to lead New Orleans over Tampa Bay.
The NFC South leaders (8-2) rebounded from a 26-9 loss to struggling Atlanta, with NFL receptions leader Michael Thomas becoming the first player in league history with 90-plus catches in the first 10 games of a season and Brees tossing TD passes of 16 yards to Thomas, 3 yards to Jared Cook and 6 yards to Ted Ginn Jr. after being held out of the end zone by the Falcons.
Safety Marcus Williams put an exclamation point on a strong defensive performance, returning the third of New Orleans’ four interceptions 55 yards for a touchdown that put the Saints up 34-17 with just over five minutes remaining.
Thomas had eight receptions for 114 yards, boosting his season totals to 94 catches for 1,141 yards. Alvin Kamara rushed for 73 yards on 13 attempts and had 10 receptions for 47 yards against a Tampa Bay defense ranked No. 1 against the run but last against the pass.
A battered Jameis Winston completed 30 of 51 passes for313 yards and two TDs for the Bucs (3-7), who have lost five of six following a 2-2 start.

COWBOYS 35, LIONS 27
DETROIT — Dak Prescott threw for 444 yards and three touchdowns, lifting Dallas over Detroit.
The Cowboys (6-4) have won three of four games, leaning on the league’s top offense.
Dallas has had balance with the ball, but Prescott was passing with such ease that it wasn’t necessary to try to move the ball much on the ground in the Motor City.
The Lions (3-6-1) were without Matthew Stafford for a second straight game and have lost six of seven.
Stafford’s backup, Jeff Driskel, played well enough to give his team a shot to compete. He threw a 25-yard yard TD pass to Marvin Jones with 5:49 left to pull Detroit within eight points.
The Lions forced Dallas to punt on the ensuing drive, but they punted it back while facing a fourth-and-26 from midfield.

COLTS 33, JAGUARS 13
INDIANAPOLIS — Jacoby Brissett threw one touchdown pass, ran for another score and used an impressive ground game to get Indianapolis back on track with a victory over Jacksonville.
The Colts (6-4) ended a two-game losing streak and pulled back into a tie with Houston for the AFC South lead.
Jacksonville (4-6) has lost four of six, this one coming despite the return of starting quarterback Nick Foles. He had missed the previous eight games with a broken left collarbone.
And the Colts made it look easy with their tag-team ground game.
Marlon Mack carried 14 times for 109 yards and a touchdown before leaving in the third quarter with a hand injury. His replacement, Jonathan Williams, had 13 carries for 106 yards, the first 100-yard game of his career, and celebrated two long, fourth-quarter runs by giving himself up inbounds to keep the clock running. Nyheim Hines scored on a 7-yard run and Brissett scored on a 5-yard run.
It was the first time Indy had two 100-yard rushers in the same game since Oct. 6, 1985, and only the third time in franchise history — all against the Jags’ usually stingy defense.

BILLS 37, DOLPHINS 20
MIAMI GARDENS, Fla. — Josh Allen tied a career high with three touchdown passes and ran for another score to help the Buffalo complete a season sweep of Miami.
Allen’s TD tosses covered 40 and 9 yards to John Brown, and 23 yards to Dawson Knox. Allen also scored on an 8-yard run, and he had a 36-yard run to set up a field goal.
Miami couldn’t keep up against Buffalo’s smothering defense. The Bills totaled a season-high seven sacks and allowed only 23 yards rushing.
The victory gave the Bills (7-3) their best 10-game record since 1999, but they won for only the second time in the past four games.
Miami (2-8) lost to Buffalo for the fourth time in the past five meetings.
Allen went 21 for 33 for 256 yards without a sack or turnover, and his passer rating of 117.7 was a career high. He extended his streak of passes without an interception to 163.
Brown finished with nine receptions for 137 yards, both season highs. The Bills netted a season-best 424 yards, and their point total was also a season high.

JETS 34, REDSKINS 17
LANDOVER, Md. — Sam Darnold more than made up for an ill-timed interception by throwing for 293 yards and a career-high four touchdowns, and New York routed rookie quarterback Dwayne Haskins and Washington for its second consecutive victory.
Darnold was 19 of 30 passing and tossed touchdowns to Daniel Brown, Robby Anderson, Ryan Griffin and former Redskins receiver Jamison Crowder. Despite getting picked off deep in his own territory by Jon Bostic, the 2018 third overall pick bounced back and now has 11 TDs and 10 INTs this season.
The Jets (3-7) sacked Haskins six times, including three by safety Jamal Adams, and linebacker Neville Hewitt intercepted him in his return to the lineup. Le’Veon Bell ran for a 1-yard TD, Griffin had a career-high 109 yards receiving and New York eclipsed 400 yards of offense for the first time in 20 games.
Washington (1-9) set a franchise record by going 16 consecutive quarters without a touchdown before Derrius Guice scored on a 45-yard screen pass early in the fourth. Haskins was 19 of 35 passing for 214 yards and threw TD passes to Guice and tight end Jeremy Sprinkle in his first game since being named starter for the rest of the season.

RAIDERS 17, BENGALS 10
OAKLAND, Calif. — Derek Carr passed for 292 yards and a touchdown, Josh Jacobs had his fourth 100-yard game in the past six weeks, and Oakland beat winless Cincinnati.
Maxx Crosby had a team rookie-record four sacks as the Raiders harassed Bengals rookie quarterback Ryan Finley and shut down Cincinnati’s offense after Joe Mixon had given it a lift in the first half.
Oakland (6-4) won its third straight to move into a first-place tie with Kansas City in the AFC West. The Chiefs play the Chargers on Monday night in Mexico City.
Cincinnati is headed in the opposite direction. The Bengals are the NFL’s lone team without a victory, and their 0-10 record matches the 1993 team for the worst start in franchise history.
Even when things appeared to be going well for Zac Taylor’s team, something went wrong.
With Cincinnati trailing 17-10 in the fourth quarter, Bengals wide receiver Auden Tate made a 20-yard catch on a third-and-19 play but suffered a neck injury when he was hit from behind by Curtis Riley. Tate stayed down for several minutes and was eventually placed on a cart and taken to the locker room.
___
More AP NFL: https://apnews.com/NFL and https://twitter.com/AP_NFL