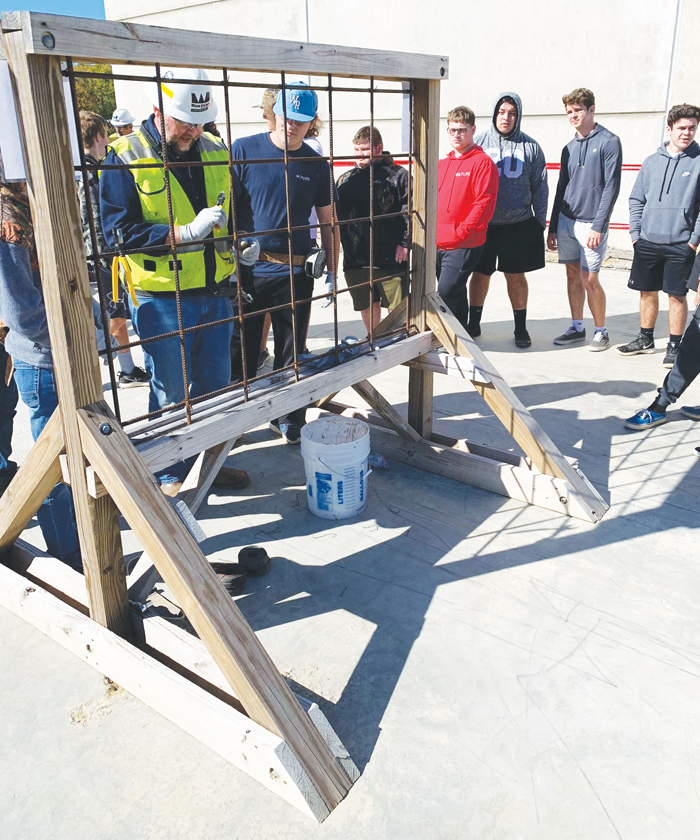 SALISBURY – In an effort to expose them to potential careers, dozens of students from five high schools in Rowan County got hands-on experience at Wayne Brothers Cos., a construction company headquartered in Davidson.

The students — enrolled in Rowan-Salisbury Schools’ Career and Technical Education program — heard from the company’s CEO, ran some machines and learned about the apprenticeship program.

It’s the second time for such a visit to Wayne Brothers.

“We’re working to develop a partnership with Wayne Brothers,” said Sherilee Deal, middle school career development coordinator for the school system. “Through that partnership, we want to provide an experience to evaluate specific types of training and see to incorporating it into the curriculum.”

Goodale said students were broken up into groups and visited construction sites to see the ins and outs of the work.

The 75 students were able to run a couple of machines, use remote control levelers, learn about rebar wiring, and visit the training facility for the apprenticeship program, said Goodale.

“Through apprenticeship programs, students are able to earn high school credit, are paid per hour and trained at the Wayne Brothers facility,” she said.

Goodale said Rowan-Salisbury Schools aims to hold another “Experience Day” in the spring.

Students who wish to pursue careers in construction as an electrician, welder, carpenter or mechanic can learn more about the skill set needed.

“We’re just trying to expose students to those different types of careers,” she said.

The program started when Wayne Brothers reached out to the schools. The goal is to identify kids early on in high school who are interested in construction careers and the apprenticeship program, Goodale said.

The school system has not set the final details of the apprenticeship program with Wayne Brothers but is looking at a plan in which students would spend three to four hours each morning or afternoon in the program. The students would have to have their own transportation and have a serious work ethic, educators said.

The program would be tailored to the true interests of students, Smith said.

According to Wayne Brothers, students in the program would take regular CTE classes such as drafting, construction and engineering to polish their skills and then apply to be part of the apprenticeship program.

Apprentices often earn 15 credit hours that can be applied to a college degree.

“We hope to be able to have students able to apply in April. We hope to maximize the opportunity and have maybe 20 to 30 students in the fall and the same in the spring of each year,” Smith said. “We’re creating this program for next year to get kids interested, to show students what we have to offer them moving forward.”

Smith said she wants students to “be prepared as soon as they leave the four walls of their high school to start in the workforce.”

Wayne Brothers, which was started by brothers Keith and Eric Wayne, has provided concrete construction as well as civil and infrastructure solutions throughout the Southeast since 1985.

The company says its philosophy is that “quality begins from the foundation up.”

Students in the apprenticeship program are often provided a mentor and a person to go to directly, Deal said.