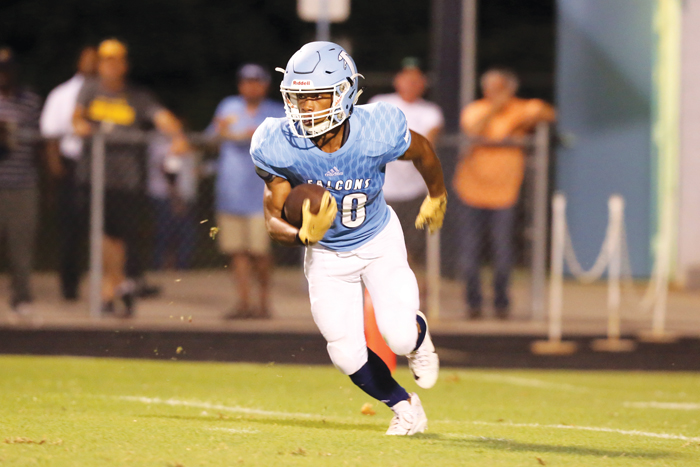 West Rowan running back Jalen Houston (10), shown during an earlier game this season. On Friday night, Houston led a rushing attack that sparked the Falcons past Morganton Freedom, 42-32, in the first round of the state 3A playoffs. James Sipes file photo/for the Salisbury Post

MORGANTON — West Rowan fell behind early, but recovered to roll past Freedom, 42-32, here Friday night in the state 3A high school football playoffs.

The Falcons’ vaunted rushing attack, led by senior running back Jalen Houston, was the difference, gaining 262 yards and keeping the ball from the Patriots’ high-flying offense as much as they could.

“Just a really good win for our kids,” said West coach Joe Nixon. “I’m really proud of them. We dug ourselves a hole early. Obviously, it was not how we wanted to start the game, but our kids showed a lot of character tonight and proved that they still want to play football this season.”

The visiting Falcons were behind, 12-0, before their offense took the field.

Led by senior quarterback Jayden Birchfield, a 6-3, 205-pounder who has committed to the Naval Academy, the Patriots scored on their first possession. Birchfield did the honors himself, with a 6-yard run.

But Freedom has kicking issues and it played a big part in the contest. The Patriots kicked no extra points and tried five onside kickoffs. Freedom also had a snap over the punter’s head and several poor punts, leading to good field position for the Falcons.

After’s Birchfield’s TD gave Freedom a 6-0 lead, the Patriots surprised West with their first onside kick. It worked and Freedom was moving again.

Birchfield connected with 6-1 receiver Desmond Caldwell on a 25-yard scoring pass and suddenly, the Patriots led, 12-0.

“On film they didn’t show any onside kicks,” said Nixon. “They had shown sky kicks. But after the first two onside, we knew that was all they were going to do, so we started lining up with our ‘hands team’ and then we were OK.”

West recovered the second onside kick and finally got the offense on the field. Not long after, Houston bolted 73 yards for a touchdown at the 1:25 mark of the first quarter.

The Falcons do have a kicker — Federico Cruz. The senior’s extra point, the first of six straight on the night, cut the West deficit to 12-7.

The second period belonged to the Falcons.

Sophomore QB Noah Loeblein led a time-consuming drive and took the football into the end zone himself, on a 1-yard sneak. After Cruz’ kick, West led, 14-12, with 4:02 left before halftime.

The West defense then followed with a solid series and a poor Freedom punt led to good field position for the Falcons, just before intermission.

Loeblein capped a 44-yard drive with an 11-yard strike to receiver Ty’Kese Warren for another TD. Cruz added another PAT and West led, 21-12, with just 14 seconds remaining in the half.

“We knew Freedom had a real high-powered offense,” said Nixon. “They scored a ton of points on everybody they played and to hold them to 12 points in the first half, that was the difference in the game. After those first two series, our defense really buckled down and played good football.”

In the second half, after both teams turned the football over on downs on their first possessions, West’s offensive line took command and led a rushing attack that added on to the lead.

Houston scored two times on the ground in a span of just over two minutes in the third period. First, the speedster had a 15-yard TD burst, and then, after linebacker Baiden Suddarth recovered a Freedom fumble, Houston added a 5-yard scoring run.

“On offense, we kept plugging away with the running game and were able to hit ’em with a couple of passes to really seal the deal for us,” added Nixon. “No surprise, but they came out and loaded the box on us. We haven’t been throwing the ball, not because we can’t or don’t have guys to throw it to, we’ve just had a lot of success running the football. So, it was good to see our guys in the passing game make some plays tonight, too.”

In the final period, Freedom fought back with 20 points, starting with a 3-yard plunge from running back Makhi Spates. A two-point conversion pass failed.

The Patriots then made things very interesting by recovering an onside kick, with just over 11 minutes left in the game. It was Freedom’s second onside kick recovery in four tries.

An 18-yard run set up the Patriots’ next score. Birchfield then hit Caldwell again, this one a 20-yard scoring pass. A two-point conversion pass was successful and the Falcons’ lead was down to 35-26.

However, the Falcons were able to recover the ensuing kickoff and they quickly moved down the field for what turned out to be the back-breaker for Freedom.

Loeblein finished the drive by connecting with Warren again, this time, a 33-yard touchdown pass. Cruz, the all-county kicker in 2018 and a good bet to repeat this season, then nailed his sixth straight PAT. With 5:45 remaining, West led, 42-26.

The Patriots had one more score left in them and it took less than two minutes to do it. Running back Chase Young went over the from 1-yard line with 3:59 left. Freedom had cut the score to 42-32, but once again, could not convert the two-point conversion.

Freedom would get the ball back once more, but Birchfield’s last pass was intercepted by West’s Chaz McCombs as the clock hit triple zeroes.

The Falcons’ defense didn’t stop Freedom every time, but made enough stops, as Suddarth had his usual multi-tackle game, thanks, in part, to West’s solid defensive line.

“Baiden plays like Baiden plays — wide open,” said Nixon. “He did a good job of getting us in the right calls and right checks. He’s a tackler, sideline to sideline.”

But again, it was the offensive line (Edwin Berrios, Jonny Hassard, Levi Jenkins, Josh Noble, Drake Martin) and backs Houston and Cayleb Brawley, who churned up the clock and the Patriots’ season.

“Jalen ran the ball very well and very hard,” Nixon said. “The big run, the long one for a touchdown was good, but those four- and five-yard, short gains are big, too. He runs tough and gets yards after the initial contact. We’re very proud of our backs and the entire offensive line tonight.

“In the playoffs, it’s all about just scoring one more point than the other team,” concluded the Falcons’ head coach. “We’re movin’ on.”

NOTES: Freedom actually outgained West, 466 yards to 341. … Birchfield completed 18 of 43 passes for 267 yards. … West scored in every quarter against Freedom and held the Patriots scoreless in the second and third periods — a key to the victory. … Deja vu — In 2016, West defeated Freedom in the first round, 33-13, and then knocked off Crest the next week, 35-7. The Falcons fell in the third round to Hibriten, 49-20.

WSAT Memories 1280 contributed to this story.