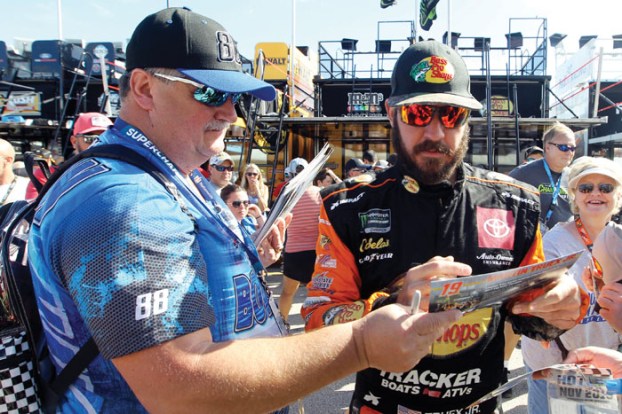 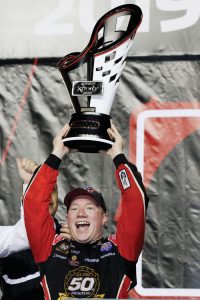 But there was one final question from the back of the room: UFC fighter Colby Covington had crashed the event and wanted a tip on winning a title bout. Busch gave the fighter colorful advice for a championship smackdown, basically telling Covington not to care about your opponent, put personal feelings aside and go kick their rear end.

It couldn’t be more fitting for NASCAR’s heavyweight fight, a four-driver showdown Sunday at Homestead-Miami Speedway that pits Busch against two of his Joe Gibbs Racing teammates. Busch, Denny Hamlin, and Martin Truex Jr. will race their Toyotas against Kevin Harvick, a Ford driver from Stewart-Haas Racing. The Las Vegas odds makers have basically posted the winner-take-all race as a dead heat with no clear favorite.

It is next to impossible to determine which of the four has the best car because rain disrupted the weekend schedule and NASCAR canceled Saturday qualifying to give the drivers a lone 50-minute practice session. The Gibbs cars rolled out 1-2-3 on the timing sheet, with Truex apparently the best on long runs and Hamlin holding steady on shorter sprints.

Less clear was Harvick, ninth on the timing sheet but showing zero concerns.

This championship field is nearly identical to last year, with Busch, Harvick and Truex, all former champions, returning to the finale again. Hamlin has not been in the championship race since 2014, is coming off a winless 2018 season but has all the momentum headed into Sunday following last week’s statement victory at Phoenix.

He’s the only driver in the final four without a title, yet seemed most at ease following Saturday’s practice. Harvick was locked in on his race car and kept his answers short. Busch wore dark sunglasses on the long march from the garage to the stage inside the media center and wondered what could possibly be left to discuss. Truex was even-keeled, eager to get into the JGR debrief and put together his plan for Sunday.

“You got to keep doing what got you here, right?” Truex said. “It’s a big race, but the best chance for one of us to win is to do the same thing we do every week as a team, as group.”

Hamlin was the loosest of the four with the busiest weekend schedule. He turns 39 on Monday and has always used this championship weekend as a birthday party, and his celebrity entourage was scheduled to begin arriving in South Beach late Saturday. Among his friends expected to be in attendance Sunday is Michael Jordan and Hamlin doesn’t want to stray from his usual routine.

“Trying to have fun, enjoy everything that surrounds us,” he said.

He joked about qualifying being canceled because it gave him the first pit stall — a position team owner Gibbs had him forfeit last year to Busch because Busch was racing for the title and Hamlin was not.

“It’s that good karma for giving up that pit box last year,” Hamlin smiled. “It all comes back around.”

Although there is no clear betting favorite, Hamlin seems to setting himself up for a celebratory weekend. He had the blessing of rookie crew chief Chris Gabehart, who has been credited for keeping Hamlin on a short leash all year and leading him to a Daytona 500 win and five other victories.

“I’ve told him to go enjoy himself,” Gabehart said. “To compete at this level, the very, very top, against the best is something that you shouldn’t take for granted and enjoy the moment. You’ve got to stop and take a little bit of extra time and just really enjoy what it is that we’re doing here. I fully anticipate Denny will do that tonight and have fun. He’s responsible about it. This isn’t the Denny of 10 years ago.

“He knows what he can and can’t do maybe a whole lot better than he used to. It’s business as usual for us.”

The finalists had little on-track preparation time with just the 50 minutes to get a feel for NASCAR’s rules package on Homestead for the first time. The lower horsepower, higher downforce package has had mixed results at various tracks, but Homestead has traditionally produced some of the best races of the season. The champion has had to win the race every year since this format was introduced in 2014, and nearly every one of those races was decided after late cautions.

Homestead is moving on the 2020 schedule to March, ending its streak of 18 years as the season finale, and there will be one final championship bash in victory lane.

Reddick and Custer traded the lead three times in a single lap with Reddick finally surging his Richard Childress Racing entry to the front for good with 18 laps remaining. Reddick is the first to win consecutive Xfinity championships since Ricky Stenhouse Jr. in 2011 and 2012 and ninth driver with multiple titles.

It’s the only championship for manufacturer Chevrolet, which was shut out in Friday night’s Truck Series finale when Matt Crafton won the title in a Ford. Chevrolet is not represented in the Cup championship race Sunday.

Reddick’s title comes in his final ride as full-time driver of the No. 2 for RCR. He’s being promoted to the Cup Series next season to drive the No. 8 Chevy.

Custer finished second and runner-up to Reddick in the championship race for the second consecutive year. Stewart-Haas Racing announced Friday that Custer is being promoted to the Cup Series next year. Same for Christopher Bell, who finished fifth in the race and third in the championship picture, who was probably the title favorite but his Toyota dropped off in the final stage of his final ride before he moves to Cup.

Justin Allgaier, who won at Phoenix last weekend to make the final four, finished 14th and last in the championship race.

Reddick won the title last year driving for JR Motorsports, but he had already made the decision to move to Childress for this season. He had to win at Homestead to claim both titles.

Childress has likened the 23-year-old to Hall of Famer Cale Yarborough and believes the driver will feature heavily in the future of the organization, and Reddick is the first driver in the Xfinity Series to win consecutive titles for different teams.

“It’s all about Richard, man,” said Reddick. “He’s the one who believed I could be a champion even before I won the first one.”

Reddick ended the season with six victories, shy of Bell’s eight wins and seven from Custer. Reddick and Custer had a pit road confrontation during these playoffs and raced each other hard before Reddick used a crossover move to take the win for good.

“It sucks to come home second two years in a row. We will take it. We were a lot closer this year,” Custer said. “I am looking forward to next year and seeing what we’ve got.”

Bell has now lost two titles he was favored to win.

The title was the first for Reddick crew chief Randall Burnett.

“Best team I’ve ever been a part of, amazing group of guys, and amazing driver, too,” said Burnett.

Chase Briscoe won rookie of the year and said after the race Stewart-Haas Racing has not yet found enough funding to bring him back in 2020. Briscoe said he’s hopeful the organization can put something together because he has no other ride planned.