Davie County runs for 4A playoff win over West Meck, 46-14 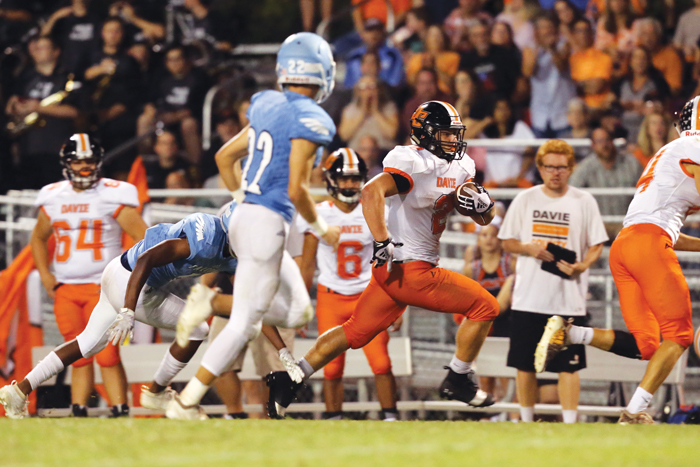 Davie County's Tate Carney (2), shown during an earlier game against West Rowan, helped lead the War Eagles past West Meck, 46-14, in the 4A state playoffs on Friday night. James Sipes file photo/ for the Salisbury Post

MOCKSVILLE — In the first round of the 4A state playoffs Friday night at War Eagle Stadium, Davie County’s passing game did not click like it has so often in 2019.

Davie’s ground game picked up the slack as the War Eagles pulled away in the second half and pounded West Mecklenburg, 46-14.

The War Eagles held just a 10-6 halftime lead, but they ultimately outclassed the Hawks, who finished 6-5 — their fourth straight winning season. The War Eagles (7-5) earned their first playoff win in three years and clinched just their second winning season in seven years.

Davie running back Tate Carney ran four times for 59 yards and QB Nate Hampton scored on a 13-yard keeper as Davie took a 7-0 lead on its first possession of the game. One possession later, Willy Moure hit a 26-yard field goal to put Davie in front, 10-0.

The rest of the half was not pretty for the War Eagles, who had trouble containing West’s one-dimensional attack. That one weapon was the fierce J’Mari Taylor, who accounted for 241 of West’s 245 first-half yards by gaining 136 yards on the ground, 32 with three completions and 73 as a receiver.

Davie, though, regained control quickly in the third quarter. Hampton connected with Zymere Hudson for 58 yards and Jack Reynolds made a sliding 20-yard catch in the end zone as Davie pushed its lead to 17-6.

After Gage Recktenwald got Davie’s second interception of the night — Justus Tatum had the first — Carney pounded out 13 yards on three running plays to make it 24-6.

Back-to-back sacks by Paul Pollard and Zach Smith forced West to punt from its end zone. The snap was low and Davie blocked it. A Hawks’ player kicked it out of the end zone to result in a safety, which sparked 22 Davie points in a span of 6:24.

Za’Haree Maddox went up for a beautiful 29-yard TD catch. After Jadon Davis, a JV call-up, got a sack, DeVonte Lyerly dashed 47 yards to the end zone. On Davie’s next play from scrimmage, Josh Robinson broke a tackle and rumbled 53 yards to cap the scoring.

Hampton’s passing numbers were not drop-dead gorgeous (11 of 27 with an interception), but he did average 18 yards per completion to post 198 yards through the air.

The shortcomings in the air were offset by Carney’s 130 rushing yards, Hampton’s 85, Lyerly’s 83 and Robinson’s 53. Davie averaged 8.7 yards per carry to pile up 24 first downs.

For 10th-seeded West, Taylor (161 rushing yards, 90 receiving yards) did the heavy lifting as West finished with 386 yards of offense.

NOTES: No. 7 Davie will get a rematch with conference rival East Forsyth next week in Kernersville. East won the first matchup, 49-35. … This was only the second Davie game that wasn’t undecided in the fourth quarter. … Davie struggled on third down (4-for-12) and committed 12 penalties for 105 yards. … West was also plagued by penalties (14-116).