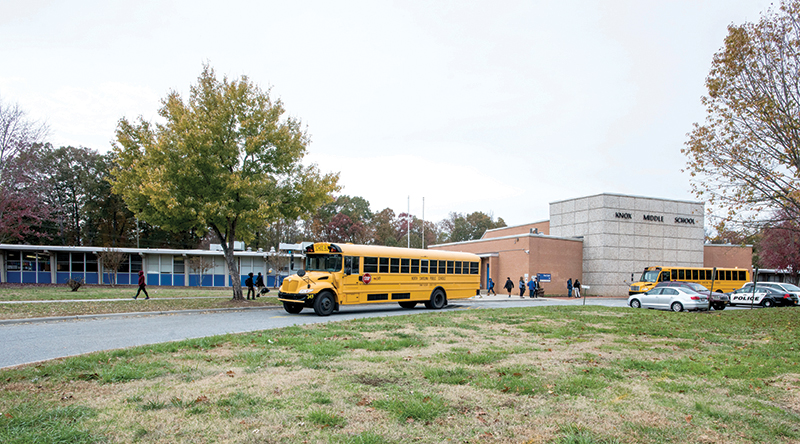 SALISBURY — Parents, family and Salisbury residents associated with Overton Elementary School have a single request for the Rowan-Salisbury Board of Education: build a K-8 facility instead of shuttering one of the city’s two elementary schools.

Along with Isenberg, Overton is one of two elementary schools in the Salisbury city limits. It’s also the target of the latest school closure proposal.

That proposal has drawn opposition from a wide range of people, including local businessmen and Mayor Al Heggins.

“The possibility of displacing children, interrupting their comfortable learning environments and creating potentially difficult logistical issues for parents/guardians regarding transportation to the various schools where children will be sent temporarily or permanently does not bode well for the community and especially for the children,” Heggins wrote in an email to the Post. “The top priority should be what is best for the children in the bosom of our community and their familial structures. If there is a way to build a new K-8 complex on the land between Overton and Knox while allowing children to remain in their current respective schools, let’s do it.”

But the school board chose a different plan in September when it voted 4-3 to move forward with a $26 million renovation of Knox Middle School. That renovation would build a new, two-story classroom building and replace all but the shell of remaining structures.

While the school board has not yet taken a vote to close Overton, the tentative plan has drawn strong opposition.

In an opinion column to be published in Sunday’s Salisbury Post (“Go for the win-win at Knox, Overton), Anthony Smith wrote, “The plan to disperse children, many of whom already come from food deserts and under-resourced vulnerable communities due to long-standing social inequities, seems to give more momentum to forces that add to an already pervasive instability in the lives of several children.”

Smith has two granddaughters who attend the school.

In an email to Rowan County commissioners, who allocate funding to the school system, philanthropist Fred Stanback wrote that he understands the combined K-8 school may be too expensive but posed a question: “How can Rowan County expect business owners to come here when there is a decades-old deficit in school support?”

Similarly, Victor Wallace, of Wallace Realty, said the school board has managed to find money to build schools “in every quadrant of the county, except Rowan County’s economic core, Salisbury.”

A plan presented in December estimated a new K-8 facility near Salisbury High School would cost $56 million, including the purchase of property. Another option presented in February, to build a school in the field between Knox and Overton, came with a $52.8 million estimate. Both options wouldn’t require the temporary displacement of students during construction.

School board Chairman Josh Wagner told the Post that the K-8 school isn’t a bad idea but that the board is trying to effectively spend its allocated money.

“We’re just trying to find a way to spread that out as best as possible,” Wagner said.

Consuming part of that total is a planned elementary school in southern Rowan County. In August, the board applied for a state grant that could provide as much as $10 million to help build an elementary school on China Grove Road, which could consolidate students from Enochville, China Grove and Landis into one site. The school board would have to provide a one-to-one match of state funding.

“I never opposed the K-8. My question was how it was going to be funded with limited resources,” Byrd-Clark said. “My hope is that the school board will go back and look at what it will cost to build, what that looks like and find the way to move forward that’s about the needs of our kids. Everybody needs to be open-minded and just know that we’re trying to do the best for public education.”

As the school board moves forward, Byrd-Clark said, it needs community buy-in, too.

Wagner said building a K-8 school is made more appealing by consolidating students from more than Overton. But Wagner said he’s also worried the combined facility could have too many students.

Elizabeth Trick, an architect and member of the parent-teacher association at Overton and Knox, said she’s been pleased with public response to the plan so far. Trick said school board members have received dozens of emails, something Wagner confirmed, advocating for the K-8 school.

“I think the one thing that’s been interesting is that it’s not just parents,” she said. “It’s educators and concerned parents and grandparents. I’m quite pleased that things have struck a chord with a lot of people who don’t have children.”

Trick said she applauds school board members for having the “determination and willingness to serve on the school board” and that the community is asking to suspend decisions about closing Overton until there’s time to decide what’s most beneficial.

Residents upset about Overton’s proposed closure are expected to show up en masse at a school board meeting at 5 p.m. Monday in the Wallace Educational Forum, 500 N. Main St. The board is set to discuss a plan to close Overton. Wagner said he also expects to hear from people during the public-comment period at the meeting.