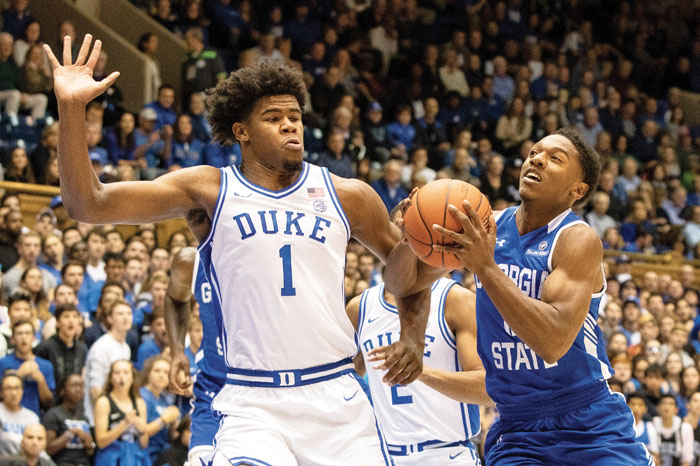 By JOEDY McCREARY AP Sports Writer
DURHAM (AP) — No. 2 Duke hadn’t shot this poorly all season. The Blue Devils made up for it with one of their most impressive rebounding performances in four decades under Hall of Fame coach Mike Krzyzewski.
Tre Jones scored a career-high 31 points and Duke pulled away to beat pesky Georgia State 74-63 on Friday night.
Freshman Vernon Carey Jr. added season highs of 20 points and 14 rebounds and Jack White finished with 10 rebounds.
Duke (4-0) overcame its season-worst 34.2% shooting by outrebounding the Panthers 58-32, and the school says its 30 offensive rebounds were the most in Krzyzewski’s 40 seasons.
“I feel like if I rebound, the points will just come,” Carey said.
And yet, three nights after top-ranked Kentucky was upset at home by Evansville, the Blue Devils — 28 1/2-point favorites — were on upset alert against an unintimidated mid-major for longer than expected before they scratched out a sloppy victory, their 150th in a row at Cameron Indoor Stadium against nonconference opponents.
“Probably at halftime, I feel like maybe we were just like, ‘What if that happens to us?’” Carey said. “Coaches told us to bring it, and if you brought it, you’d be fine, and that’s what we did in the second half.”
This one was tied at 40 with less than 17 minutes to play, before Jones took over. He scored 10 points during a 13-0 run that pushed the lead into double figures.
He put them ahead to stay with a 3-pointer and followed that with three layups through traffic. On the last one, he blew past Chris Clerkley while drawing contact from the Georgia State guard, then hit a free throw to put Duke up 51-40. After Wendell Moore capped the run with a stickback, the Panthers never got closer than nine the rest of the way.
Corey Allen scored 20 points and Kane Williams finished with 16 for Georgia State (1-2).
BIG PICTURE
Georgia State: For much of the night, the Panthers put a serious scare into the Blue Devils with their zone defense and appeared capable of claiming just their fifth win against a Top 25 opponent and first since that unforgettable upset of Baylor in the 2015 NCAA Tournament. Georgia State has claimed three NCAA bids in five years and if the Panthers play like this all season, they should claim a fourth.
“I was pretty confident that we would come out and compete, and our message to our team was, there was going to come a time in the game — either late in the first half or at some point in the second half — where we were going to have to deal with some real adversity in this building,” coach Rob Lanier said. “Adversity came and we didn’t handle it quite as well as I’d hoped.”
Duke: These Blue Devils are nowhere near a finished product, leaving them with plenty of room to grow and improve. Duke had 10 turnovers and shot 37 percent in the first half while this one was tense. And while Jones finished 4 of 8 from 3-point range, the rest of the team was a combined 3 of 20.
POLL IMPLICATIONS
That loss by Kentucky leaves Duke as the obvious heir apparent to claim the top spot in Monday’s poll. The Blue Devils didn’t look much like a top-five team during their sloppy first half but they certainly figured things out in the second 20 minutes.
STAR WATCH
Jones’ previous scoring high was 22, set against Virginia Tech last March in the NCAA Tournament regional semifinals. He also finished with 10 field goals after hitting eight of them twice last season, most recently against the Hokies. “It felt good just to get back to myself and playing like myself again,” Jones said.
UP NEXT
Georgia State: Visits Georgetown on Sunday night.
Duke: Plays California on Nov. 21 in New York in the 2K Empire Classic semifinals.