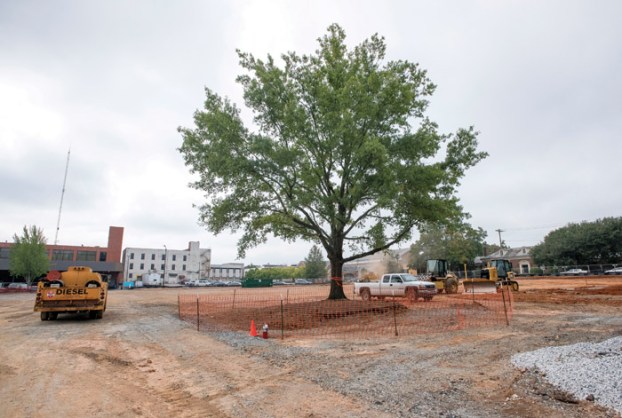 After a lengthy discussion, the commission voted 4-3 in favor of the new design that calls for a taller stage than the one previously proposed and has a different shape.

Josie Bulla, a designer at 505Design, said park officials realized the previously approved design would not work after meeting with acoustic and sound engineers and city officials. The stage needs to be less barrel-shaped and more of an open structure, with a flatter roof, to have proper sound amplification. The stage also would have to be taller to accommodate temporary equipment installed by performers, such as lighting, on the ceiling of the stage.

Former Salisbury Mayor Margaret Kluttz, who is working on the park project, voiced support for the new design and said the stage has flexibility, with programming to expand.

Allison Merriman, another designer of the park at LandDesign, said the stage could be used as a shade spot or for nonperformance events, including wedding receptions or family reunions.

Chairman Andrew Walker said the commission is “so, so supportive” of Bell Tower Green but it is important for the commission to “get it right.” Walker offered to table the discussion for the applicant to bring back more information about how the increased height of the stage would affect surrounding structures.

After deliberation about the size comparison of the stage to the Bell Tower and other park features, Bulla opened her laptop and allowed the commission members to get a virtual walk through the park.

Commission member Acey Worthy said the stage will be an amenity to the park and that it requires more height to function. Member Elizabeth Trick said she agreed and that the commission had previously approved the layout of the stage.

Another supporter, William James, said he preferred the newer design, calling it a covered bridge. James said the stage needs to be useful. He said the new design disappears into the park and is less intrusive visually.

Board member Larry Richardson said he had no problem with the new design and that the additional height would ensure people will be able to see the acts on the stage.

Member Steve Cobb said the commission initially approved the stage because it was similar to the Presbyterian church that once stood at the site. Cobb said the stage would “dominate” the Bell Tower and look like a tall shed.

Also at the future park site, the commission approved the demolition of the glass enclosure on the north side of the Wrenn House.

After the glass comes down, plywood will be put up until someone buys the building to reopen it as a restaurant, according to applicant George Kluttz.

Some commission members raised concerns about the temporary fix with the plywood. Walker added a condition that, with approval, the applicants give additional care to prevent deterioration of the structure.

Cobb said he will be happy to see the glass gone.

The commission gave the OK for the lighting but had difficulty with the awning replacement, citing design guidelines that awnings should be placed over individual windows or doors. Dillard said she felt the current awnings are choppy and distracted from the buildings’ windows.

After discussion, Dillard agreed to have two continuous awnings, one of which will say “Team Automotive Group,”

• Jon Post’s after-the-fact application was tabled. Post told the commission that he didn’t realize his rental property at 627 W. Liberty St. was in the historic district. Post replaced wooden windows with vinyl ones. Walker said the window guidelines are the clearest they have, which don’t allow vinyl material.

Walker said the windows have to come out.

The commission decided to table the application to give Post the opportunity to replace the windows following the design guidelines and come back before the commission for approval.

The commission, though, approved a shed in the backyard after members concluded it was a temporary structure that belonged to the tenants.

• After recusing himself, Worthy got approval to add a roof on the back of a building and remove a double door and replace it with windows at 321 E. Bank St.

Restaurant at Hood seminary to serve free brunch for veterans

SALISBURY — A Salisbury catering company that serves lunch and Sunday brunch on the campus of Hood Theological Seminary will... read more