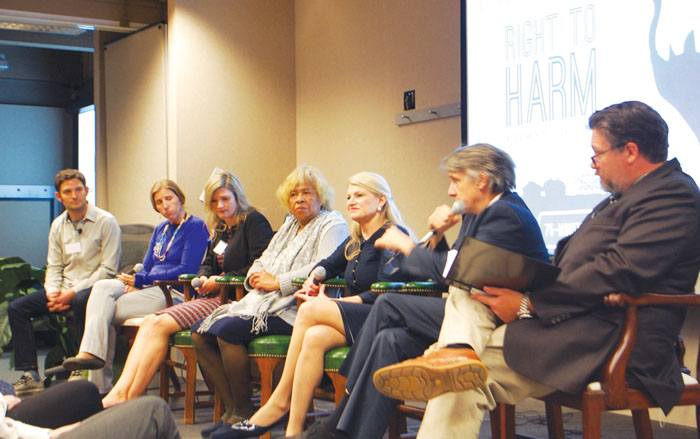 Attorney John Hughes, second from right, responds to a question during Tuesday night's panel discussion at Catawba College following a screening of 'Right to Harm,' a film looking at the public health impact of factory farming. Others on the panel include, from left, film director Matt Wechsler; Mercedes Quesada-Embid, associate professor of environemental policy and advocacy at Catawba; Jessica Culpepper, director of the Food Project at Public Justice in Washington; Elsie Herring, a community activist who lives beside a hog farm in Duplin County; Mona Lisa Wallace, whose Salisbury firm has successfully brought landmark lawsuits against the industry; and at far right, Luke Dollar, head of the department of environment and sustainability at Catawba. Mark Wineka/Salisbury Post

SALISBURY — Elsie Herring lives in Duplin County on land her grandfather bought in the 1890s and on which her late mother lived for 99 years.

She remembers family cookouts and having friends over for those gatherings. She describes how good the water tasted and the country air was to breathe.

But that changed in 1986 when a large-scale hog farm located less than a half-mile away. You can’t have a cookout now, Herring said, because of what the big factory farm has brought with it — bugs, air and water pollution, sickness and trucks.

Her family home sits next to a field onto which liquified hog manure is sprayed.

It all forced Herring to become a community activist, but she says no one listens and no one cares. She says she and others are up against an industry with all the power, one protected by state legislators and one that refuses to spend money to clean up its pollution.

“When you become a prisoner in your own home,” Herring said, “there seems to be no hope. All we want is our God-given freedoms.”

Herring is one of some 500 plaintiffs who in recent years have brought nuisance lawsuits against Murphy-Brown, a subsidiary of Smithfield Foods. She visited Salisbury on Tuesday and participated in a panel discussion at the Catawba College Center for the Environment.

The panel session came after those attending watched a 35-minute version of a longer film, “Right to Harm,” billed as an expose on the public health impact of factory farming in the United States, told largely through the eyes of residents of five rural communities.

Herring is one of the faces in the film, which also goes to locales in Maryland, Iowa, Pennsylvania and Indiana.

Duplin County, sometimes referred to as the hog capital of the world, has 2.2 million hogs and, as Salisbury attorney Mona Lisa Wallace points out, only 60,000 people.

Those awards have been trimmed significantly because of a damages cap instituted when state lawmakers moved to protect hog farms against lawsuits. Meanwhile, Smithfield Foods also has appealed the decisions to 4th Circuit Court.

Wallace and a fellow attorney from her firm, John Hughes, joined Herring on Tuesday night’s panel.

Other panel members were Matt Wechsler, editor, cinematographer and director of “Right to Harm”; Jessica Culpepper, director of the Food Project at Public Justice in Washington; and Mercedes Quesada-Embid, associate professor of environmental policy and advocacy for Catawba College’s department of environment and sustainability.

There were no representatives on the panel from factory farms. And representatives for Murphy-Brown/Smithfield Foods have called the nuisance lawsuits money grabs, baseless and without merit.

Luke Dollar, head of Catawba’s department of environment and sustainability, served as moderator.

At the center of the discussion Tuesday evening and in the film itself were concentrated animal feeding operations, or CAFOs.

“Right to Harm” says 90% to 95% of all animals raised for consumption in the United States are housed in confinement buildings. The EPA estimated in 2017 that the country has 20,000 CAFOs.

The film’s title trades on the expression of “right to farm” laws in most states that protect factory farming.

But residents and activists fighting the CAFOs point to their decrease in property values, the inadequacies of government regulations, air and water pollution, environmental racism and public health concerns — everything from rashes and asthma to COPD and compromised immune systems.

The CAFOs often are built and operate in low-income and minority communities, according to the film and panelists. Other points “Right to Harm” makes include the following:

• Right-to-farm laws allow the CAFOs to pollute above and beyond the legal limits set for nonfarming industries. CAFOs are usually exempt from abiding by most standards of the Clean Air and Clean Water acts.

• Fans in the confinement buildings blow volatile organic compounds into the air.

• Farmers can feed the world without the confinement of animals through sustainable practices.

During the panel session, Herring said the industry has farmers believing plaintiffs in the nuisance suits want to put them out of business. That’s not the case, she said. They just want them to clean up their practices.

“It’s all about money, and they have no incentive to change,” Herring said.

Wallace and Hughes pointed out they made it a point not to sue farmers; rather, the legal action was taken against Murphy-Brown, claiming it has put thousands of hogs onto various farms without taking steps to control the nuisances caused by those confined animals.

Farmers contract with Murphy-Brown/Smithfield. Farmers own their land but not the hogs. Murphy-Brown pays them per hog.

Smithfield Foods is Murphy-Brown’s corporate owner in the United States. In 2013, it was bought by a Chinese firm for $4.7 billion.

Wallace said she has been involved in the factory farm issue since 2013.

A dinner before the film’s screening drew many environmental advocates from across the state, including riverkeepers and environmental law and defense fund representatives.

Tom Butler, who was presented as a hog farmer who has taken the steps to do things right over the past 15 years, also attended.

Hosts for the dinner were Fred and Alice Stanback and Mona and Lee Wallace.

Wechsler, the “Right to Harm” director, said Tuesday’s screening of the film was the third in the state. He said it was denied inclusion in Raleigh, Durham and Wilmington film festivals.