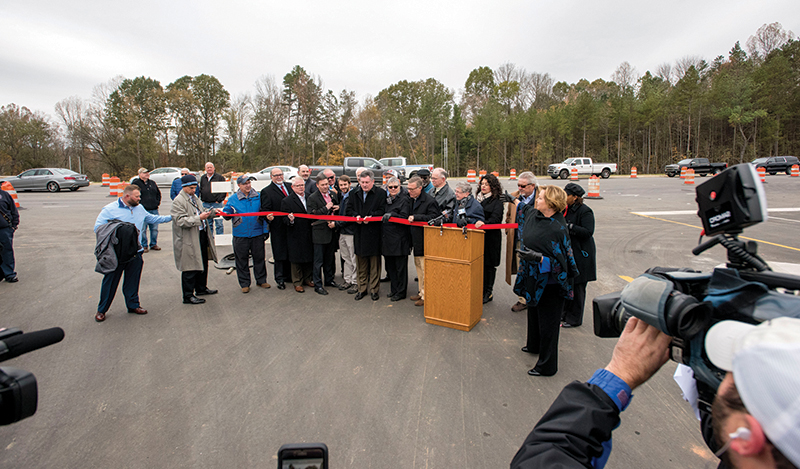 JON C. LAKEY/SALISBURY POST A small group of officials gathered along I-85 on Thursday morning to mark the occasion of the completion of a highway project that many people have waited for decades to see. A new interchange for Old Beatty Ford Road in southern Rowan County will allow for motorist to exit into stretch of undeveloped that will reportedly be developed quickly into many commercial business. Landis,North Carolina,11/14/19.

LANDIS — When Fred Steen was running for town board in 1993, people asked what he planned to do about an interchange that state officials had promised the town when building Interstate 85.

After 26 long years, Steen stood Thursday on an exit ramp of that interchange — Old Beatty Ford Road — and recalled the 1993 campaign, saying he promised voters he would work on ensuring it was built. But Steen admitted he was never sure if his advocacy for the interchange would be sucessful.

“We’ve had a lot of help from Rowan and Cabarrus County, both sides of the county line, to get where we are today,” Steen said. “It’s taken a lot of effort. There has been a lot of times I never thought this would happen. We sat in Salisbury City Hall one day and a lady from the federal government said, ‘This is not going to happen.'”

Exit 65 became a reality Thursday, with a ribbon-cutting in the morning and traffic driving across it by afternoon. The moral of Old Beatty Ford Road’s story, said N.C. Department of Transportation Division 9 Engineer Pat Ivey, is that good things come to people who wait.

A bit of hard work and some luck were needed, too.

Years of advocacy and a change in a state formula for funding transportation projects helped propel the Old Beatty Ford Road exit to the top of the state’s priority list in conjunction with the widening of I-85.

The exit is the site of a future mixed-use development named Kannapolis Crossing that’s projected to bring hundreds of millions in private investment, 700,000 square feet of commercial space and hundreds of housing units. More immediately, it will allow first responders to quickly respond to incidents on I-85.

Mike Zimmerman, chief of the Bostian Heights and China Grove fire departments, said firefighters have already used the interchange once to respond to an accident on I-85. And future response times, he said, will be trimmed by a few minutes, as there was previously a several-mile stretch without an interchange.

But economic possibilities were the focus at Thursday’s ribbon-cutting.

Businessman Jake Alexander, who previously served on the N.C. Board of Transportation, said government works best when people collaborate and that the Old Beatty Ford Road exit is an example of that. The road, which was reconstructed several miles north of its previous location, will be an anchor for future residents and businesses, Alexander said.

Kannapolis City Councilman Ryan Dayvault said he was proud to see the interchange built, perhaps the last one added to I-85 in the area, because he’s a native of southern Rowan County.

“Finally, it all came together, and thank the Lord. This is great for everybody,” Ford said. “It’s going to be big for everybody in this entire county and beyond. I didn’t think I’d ever see it in my lifetime.”

The plan to transform the Old Beatty Ford Road site — a rural interstate exit surrounded by hundreds of acres of woods — comes via Kannapolis, which will annex the land and extend utilities to the site for Kannapolis Crossing.

Kannapolis Mayor Darrell Hinnant said his city and Rowan County will invest $14 million to extend water and sewer service to the site, which will be met with a yet-to-be-determined amount of private investment by Louisiana-based Commercial Properties Realty Trust. Hinnant said the amount will be between $250 million and $500 million.

At the Kannapolis City Council’s Jan. 27 meeting, Hinnant said, members will consider a development agreement with the Louisiana developer and a contract with the company that will install water and sewer lines. All utility infrastructure should be installed by the end of 2020, he said.

“The legislature has told all of our communities that we should try to find public-private partnerships, and that’s exactly what this is,” Hinnant said. “Now it’s time to make it happen and get it on the ground out here. And the way to do that is to put these contracts in place as quickly as we can.”