NASCAR’s final 4 in fun mode ahead of championship race 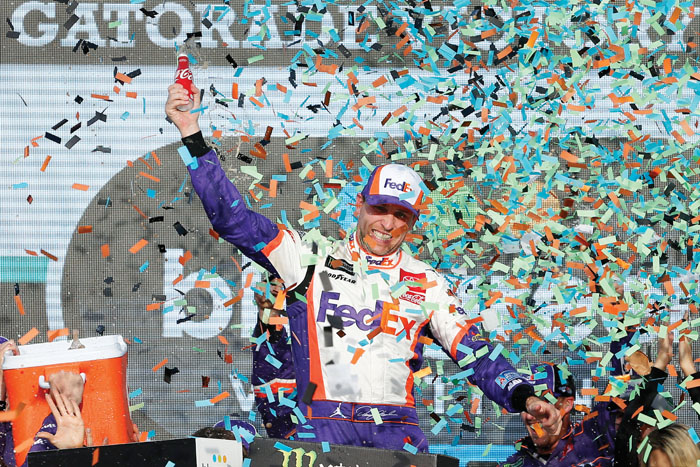 MIAMI BEACH, Fla. (AP) — Three contenders for the NASCAR championship have already given Kyle Busch a good run for the money three days before the race.

Busch and teammates Martin Truex Jr. and Denny Hamlin were stuck in New York City traffic with Kevin Harvick and the Joe Gibbs Racing trio decided Busch couldn’t run to the hotel faster than they could get there by car. There was $1,000 on the line and a videographer on hand to follow Busch’s jog through Manhattan snow flurries.

Hamlin, the ringleader of the impromptu contest, joked Thursday that sending Busch out for the run was part of a bigger plan.

“Just trying to hamper my competition, get him some shin splits, maybe a sore throat,” Hamlin said.

Busch won the bet, and he is ready to cash in again in the winner-take-all shootout Sunday at Homestead-Miami Speedway.

This is how things are most of the time in today’s NASCAR, where side bets and hijinks and camaraderie are far more common than cutthroat competition. It helps explain why this final foursome is so relaxed, Gibbs’ trio of Toyota drivers Busch, Hamlin and Truex as well as Harvick in a Ford from Stewart-Haas Racing.

All but Hamlin are former series champions and he’s the newcomer in a group that otherwise includes drivers racing for the title for a third consecutive season.

Hamlin, whose last championship chance came in 2014, won last weekend at Phoenix to save his season and earn a spot in the final — a race that falls one day before his 39th birthday. Hamlin tends to use the two-race stretch of Phoenix and Miami to unwind; last week, despite facing elimination, he rented a house with a pool and tennis court and had a “boy’s weekend” with fellow title challenger Kyle Larson and others that included a Post Malone concert.

It’s a safe bet that before the 1992 finale, the closest championship race in NASCAR history, the likes of Bill Elliott, Alan Kulwicki, Dale Earnhardt Sr. and Rusty Wallace did not share an Airbnb playing tennis against each other for money into the early morning hours.

“We’re going to have fun. It’s my birthday weekend. I want to have two reasons to celebrate, not just one,” Hamlin said. “We have a chance to compete. It is goal accomplished. Now we just got to go out there and do it.”

The Gibbs group hasn’t figured out yet how it will attack the weekend with three of its drivers chasing the prize. The organization this year has won 18 of 35 races and has little reason to stray from what has worked. But the busy week of promoting the finale took the Gibbs drivers away from their weekly meeting.

“As far as I know nothing has been discussed, it is business as usual and we do what got us here,” Truex said. “Sunday morning, we get up and we go race.”

The Daytona 500 champion, Hamlin rebounded from the worst year of his career, a winless 2018 that led to a shakeup on the No. 11 Toyota team. Hamlin got a new pit crew and crew chief in Chris Gabehart to help lead him to a six-win season.

“You see one or two guys poke in that final four here and there,” Hamlin said. “But I think it would be most gratifying if we did win because this is the best. This is by far the best in any category that you can try to put together.”

Hamlin is well shy of the championship total of one of his biggest A-list fans: Six-time NBA champion Michael Jordan is expected to attend Sunday’s race. Jordan attended the 2014 race and used a scanner to follow the action.

The 2017 Cup champion made a smooth transition to Joe Gibbs Racing and won a series-best seven times in his first season in the No. 19 Toyota. The 39-year-old Truex was the runner-up to Joey Logano last season and made the championship field four of the last five seasons. The New Jersey native won three times in NASCAR’s playoffs and could match his 2017 championship win total with a victory Sunday.

The 43-year-old Harvick won his first championship in 2015 and goes for his second at a Homestead track where he’s had plenty of success. Harvick hasn’t finished outside the top four since 2013 and no worse than 10th since 2007. He won four times this season in the No. 4 Ford for SHR, a year after he won a series-leading eight times. Harvick is the outlier to Joe Gibbs Racing.

“Knowing we’re up against an organization gives us a lot of pride in the things that we’ve done,” Harvick said.

The regular-season champion, Busch has not won in 22 weeks but still made his fifth straight championship field. The Joe Gibbs Racing driver won the Cup title in 2015. The 34-year-old Busch won four times in the No. 18 Toyota but had one of the worst playoff runs of his career. He had four finishes outside the top 10 but heads to Homestead where he has not finished worse than sixth over the last four championship races.

“To be part of it the last four is cool but to come out one of the last four is not so cool,” Busch said. “Is this Kyle’s time being here five years in a row? I’d certainly like to think so.”