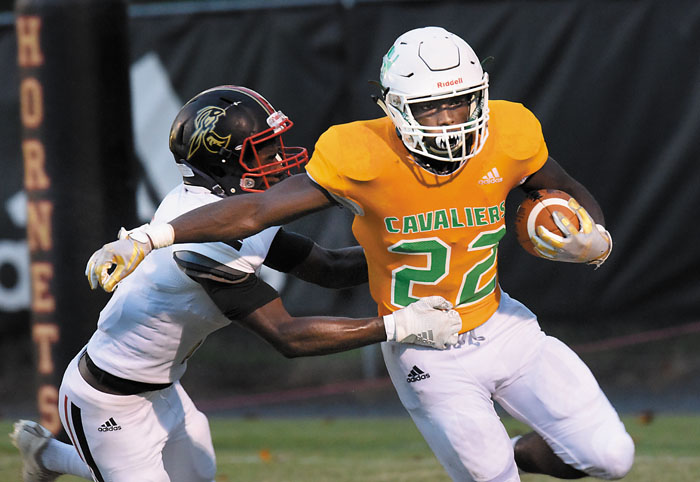 SALISBURY — During the regular season, the Salisbury Hornets posted their strongest defensive numbers since the legendary 1995 team  — the “Green Hornets,” coached by Conrad Green.

The Green Hornets (12-1) blocked kicks and picked off passes every few minutes and pitched seven shutouts. That was the team that won a playoff game, 64-0, and allowed 5.5 points per game. The Green Hornets ran into Thomasville in the third round of the playoffs. Whoever won that one was going to win state. It was the Bulldogs.

Usually, a stout defensive team can stifle either the pass or the run. But Salisbury (9-2) has shut down both means by which the football can be moved. The Hornets have left opponents no option —  except to punt.

Even that tiny points allowed per game number is deceiving. Quite a few of those opposing points were scored while Salisbury’s defense was on the sideline.

The Hornets yielded 21.4 points per game last season, but they’ve come of age. They’ve gotten older, bigger, stronger and more experienced, growing up together in the weight room, the classroom and on the field. They have five shutouts.

Jabril Norman. Zae Clay. Jalon Walker. There are fierce, big, muscular guys on that SHS defense, but there are nights when the loudest hits are delivered by a silent senior who is 5-foot-8, 150 pounds. His name is Jadarius Wood. He answers to J.D.

He has shifted into more of a safety role this year, with the Hornets moving from a base 3-4 defense to a 4-2-5 look.

He wants to be where the action is. He is the Swiss Army knife of Salisbury’s defense, a hybrid, whose defensive role will depend on defensive coordinator Mike Herndon’s plan for dealing with that particular opponent. Against the run-heavy teams, Wood will creep up close to the line of scrimmage, playing like a linebacker. Against the pass-happy teams, he’ll drop into coverage like a traditional safety.

“And we can adjust with him during a game, using him where he’s needed, depending on down and distance,” Hinson said. “It’s a luxury to have a guy like that. He’s valuable.”

Wood has actually played hurt most of this season.

“I tore ligaments in my hand in a scrimmage before the season,” Wood said. “Then I banged knees and ended up missing a game (at Ledford). I really wanted to play. I didn’t want to miss a game that big, but I couldn’t even walk that week.”

He was back for the next one.

“I think he’s finally getting healthy now,” Hinson said. “The healthiest he’s been all season, at least. He never says a lot, but you can tell when he’s feeling good. He’s got one of the best smiles on the team.”

So do touchdowns. He got one in the 55-7 win against South Rowan that closed the regular season.

It was early in the fourth quarter. Salisbury led 48-0, but the Raiders were close to punching in a score. Instead, Wood scored.

“They fumbled, I’m not sure exactly what happened, but I saw the ball there on the ground and I picked it up,” Wood said. “I’ve played some running back, so I just took off with it.”

Officially, it was a 95-yard fumble return for Wood.

“It felt good — it was fun,” Wood said. “But I don’t expect to score. I only have one goal every game — play as hard as I can on every play.”

With that type of attitude, it’s not hard to see why the Hornets are 9-2.

They play Mount Pleasant at home tonight in the first round of the 2AA state playoffs. They have a chance to be the first Salisbury team since 2012 to get to 10 wins.

The Hornets have suffered disappointing playoff losses in the first round the last two seasons, but this team looks different.

This might be a team that’s ready to get over the hump and make a run.